A Most Beautiful, Valuable And Mint Rare Set Of Canadiens Cards

Share All sharing options for: A Most Beautiful, Valuable And Mint Rare Set Of Canadiens Cards

I'm sure that most older fans have a particular set of O-Pee-Chee hockey cards that is their one favorite edition above all others. For myself, the set I would forever be captivated by is the 1971-72 set, with its beautiful and original oval designs.

The cards have a simple attractiveness that feature still photographs of players posed off ice and pasted over against a solid colour backdrop. Each team has it's own colour scheme, and the Canadiens players are set against a yellow oval backing with blue trim. The team nickname is spread in purple across the top of the card, with letters beginning and ending larger than they are mid word. Possibly the only gripe I have with the design, and it is a minimal one, is that the "C" section of the logo is more dark pink than the red it ought to be. Most of the Canadiens players pictures feature them in what was then the red road jerseys.

Likely because I was all of nine years old at the time they were released, and my imagination was then filled with hockey dreams, that the images on these cards still retain my attention and bring me back to that innocent time. That the set for me features two of the Canadiens' all time greats' rookie card is even more poignant. When I stare into the poses of Ken Dryden and Guy Lafleur, I'm pretty much taken back to being nine years old again.

Perhaps there is a set of cards, that for you, brings back the mental images of your youth such as these do for me. It was about this time that I received my first set of goalie equipement for Christmas, and I donned those pads everywhere from street hockey games to taking shots from my much older brother on a cement floor in our basement to wearing them to bed. After a time, the stuffing was coming out at the seams, and was scattered all over the house. I wanted to be Rogie Vachon right up until I wanted to be Ken Dryden.

At one time, I owned a sizeable chunk of 1971 O-Pee-Chee's, but parted with them through reasons I cannot clearly recall. Of the Habs in the set, I own only the Henri Richard, Jacques Lemaire, Pete Mahovlich, and Guy Lapointe cards, as well as a Yvan Cournoyer 2nd All Star Team card. I also have a prized signed Lafleur rookie that is my most precious collectible.

Other Canadiens cards in the set include Yvan Cournoyer, Claude Larose, Pierre Bouchard, Dale Hoganson, Frank Mahovlich, Jacques Laperierre, Marc Tardiff, Rejean Houle, Serge Savard, Terry Harper, and J.C. Tremblay. Cournoyer and Tremblay have All Star Team editions, and there is the Beliveau retirement card to bookend the set. A Series 2 pack bonus included one of 24 small player booklets, of which Dryden is the only featured Canadiens player.

There were 11 players who dressed for the Canadiens that season who do not have a card in Montreal colours, and they include Jimmy Roberts, Larry Pleau, Phil Roberto, Chuck Arnason, Bob Murdoch, Check Lefley, Rey Comeau, Germain Gagnon, Rogie Vachon, Phil Myre, and Denis DeJordy. Dejordy's card in set 1 features him in a Kings uniform before he was traded to the Canadiens, while Vachon's card superimposes his head onto Ross Longsberry's breast. This was a common occurance with late series O-Pee-Chee's, and the different coloured skin on Vachon's face and neck a dead giveaways. A Roberto card, newly traded to the St.Louis Blues, appears in Series 2. 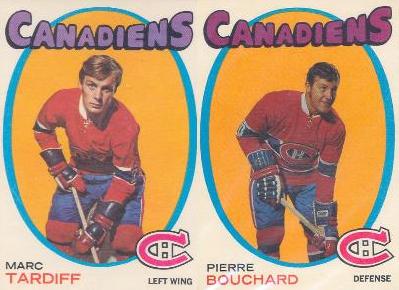 For myself, and other hobby purists, there are two larger complaints that keep the entire set just short of being perfect. One is O-Pee-Chee not being patient enough to include Frank Mahovlich in his Canadiens jersey in Series 2, and instead inserting an unlogoed Detroit photo that is part comical and sad. Such were the evolution of cards in those times, as traded players suffered the fate as bad crops and amateurish airbrushes. The other nag concerns omissions involving the award cards. While no one would cry foul and never seeing a Johnny Bucyk Lady Byng, where on God's Earth are a Stanley Cup Champions card and the accompanying Dryden Conn Smythe. Consider these braincramps the two sins of the set.

The quality of the 1971-72 O-Pee-Chee set is like many of the day and features off center cuts, discolouration, rough edges, and unaligned card backs. The entire 264 card set was published in two 132 cards series, with increased production for Series 2, which contains the Lafleur and Marcel Dionne rookies. The Dryden rookie is the highlight of the series 1 set, while the second edition includes the rookie issues of Rick Martin, Reg Leach, and Rick McLeish. Series two also boasts award winners and All Star teams, with a final two cards noting the retirements of Jean Beliveau and Gordie Howe.

Strangely enough, the highest value card in either series, is an unmarked checklist card, number 111, from Series 1. It is so rare in fact, that it is commonly accepted that it is the most difficult O-Pee-Chee to find. Back in the day, it was a standard practice to check off owned cards on a checklist, and with the card being a rare issue to being with, makes finding an unmarked rendition, centered and all practically impossible. Those few who have sought to complete an entire 264 card set for grading and evaluation purposes have been known to fork out close to $2,000 per checklist 1 card alone. At one time, the highest graded set was auctioned for $14, 351, but that price has likely doubled since that sale due to higher standards set by graders and authenticators.

For more information on the 1971-72 O-Pee-Chee cards, take a look at this indepth piece from the PSA card registry site. 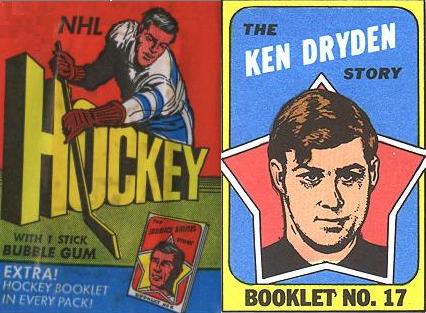