The Habs Hard Hat Crew Get Their Due

Share All sharing options for: The Habs Hard Hat Crew Get Their Due 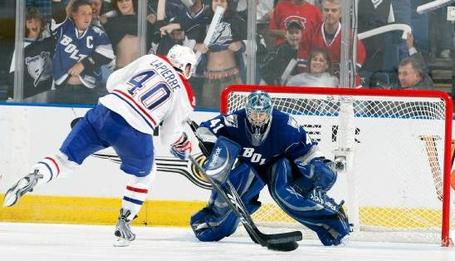 Minus superstar calibre contributions, the Canadiens are getting the job done this season in a different manner than last. It is surprising to note that they are ahead of last season's pace by 9 points, and it testifies to a larger group contributions by a set of unsung heroes getting the work done on a nightly basis.

Most all knowing Canadiens fans have been born and bred on firewagon hockey of the Flying Frenchman variety, even though the crew carrying out the task currently more resemble a french foreign legion. These Habs we cheer for a being run by three Selke winning defensive specialists in Gainey, Carbonneau, and Jarvis, adding in the two - way smart Kirk Muller as well. They know much more about winning than they do about flash and offensive guns. They do know firepower when they see it. They also know all about how it is stopped.

The Canadiens are presently one of the top five defensive teams in the NHL - should that be a mystery?

Over the summer, Habs GM Bob Gainey brought in two free agents of significance in Alex Tanguay and Robert Lang. The thought was to solidify the club as the league's highest scoring team. Both have posted respectable numbers offensively. Curiously, the pair are the team's two top goal getters so far, but that is far from being the sum of their whole contribution. Both have solid team player reputations, are defensively responsible, and are easy to coach. They understand the team concept and cause no ripples. Both will be free agents at year's end, but their demeanors never reveal such. Smart signings, both.

Fans may lament the players that Lang and Tanguay essentially replace, in Michael Ryder and Mark Streit, who are both enjoying good individual seasons thus far. Ryder has been a consistent contributor on a team loaded with offensive guns, and is sitting in just the kind of environment in Boston that should make his numbers look good. He'll be the cherry on the sundae quite often, but he'll never be the cake. Streit might be the best player on the NHL's worst club. Fans are right to state his missed contribution, but the Canadiens are ahead of his Islanders in the standings by no small margin.

Would the pricetag for having held onto Ryder and Streit place the Habs where they are now? 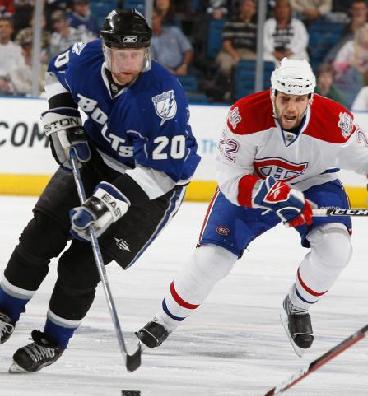 Some of the hardest working Canadiens player's worth can't be measured on a scoresheet or game recap. They often fall under the radar of the common fan. These players do the subtle, little things that win games. The highlight reels won't bore you with them. If you are just a fan and not a student of the game's inner workings, this is all Chinese to you, but the things these players do, win games.

Josh Gorges, who Gainey resigned at a million per for three years has a goal and six assists so far this season. When he was acquired late in 2007, he looked lost in a Habs uni. He currently leads the team with a plus 18, on pace for a plus 41 campaign. Fans will rarely see him deliver a devastating body check, make a pinpoint pass leading to a glorious goal, or be selected among the three stars of a game, but his worth to the team is inestimable. Gorges always takes a hit in order to make the proper play, never compromises his coverage because of an offensive opportunity, and rarely places a team mate in a compromising position. He plays within his means and he adds to the team in unselfish ways. He ought to be the runaway winner of this year's Jacques Beauchamps "Unsung Hero" award, unless Maxim Lapierre's work sways the french Montreal media.

Speaking of that, and hard working Habs, Lapierre has been a revelation of late, having greatly contributed to the team's last two wins with unlikely offensive prowess and heroics. Lapierre's recent successes are again a testament to the team concept. Having been groomed in the Habs organization for three seasons now, we are presently seeing the fruition of those teachings combined with the player's work ethic. Lapierre has been groomed for a particular role, that of a depth centerman (read third or fourth line) who is extremely hard to play against in many game situations.

Many Habs fans had written off Steve Begin at the beginning of the season. Many assumed his time has passed and that his place on the starting roster would be swallowed up whole by young guns eager for his icetime. What somemay have missed, an even coach Carbonneau is guilty of assumptions, is that Begin is a rare breed of tireless excecution and unending heart. Who on the team combines the multitude of leadership qualities Begin brings. Is there a player as willing to block shots, drop the gloves, consistently hit opponants wrecking ball style, and go all out for the team as much as Begin. Some only come close. Alot has been made in the past of how Kovalev has helped tutor the team's young Russian stars, but it is time Begin gets his due for the role model he has been to players such as Lapierre and Latendresse. 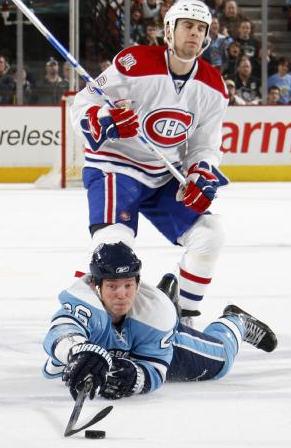 Tom Kostopoulos is another bugger to line up against for opponants. His blood and sweat rarely translate into scoreboard points, but he he is an energizer and momentum shifter. He is all about being a team player first, doing the dirty work, taking hits and giving them, and sacrificing every pound of his frame to winning a game. Style points are oblivious to him. He will drop his gloves and take a pounding if he feels it might inspire the team.

Other more high profile players on the Canadiens get their tasks done without much fanfare and spotlight time.

Roman Hamrlik is being paid a healthy sum to be the Habs Mr. Clean. While achoring the Canadiens second defensive pairing, he is handed much of the club's dirty work. Being no treat to play against because of his size and physical nature, Hamrlik is today's Habs version of Craig Ludwig - all meaness, stickwork and presense. Opponants who dare take on Hamrlik pay a price, in corners, cycling, or in front of the net. Consistency is often an underappreciated trait, but what Hamrlik brings, is a worryless work ethic and execution.

Once, Patrice Brisebois might have aspired to bring to the team, a game that resembled what Chris Chelios brought in toughness and offensive variables. Risks beyond obvious talent were Brisebois' major laments. This season, and in strictly speaking of it, it is as if Brisebois has sought to be less of what all his combined skills have projected him to be. Simplicity is the order he seems to have complied with, and it has done him and the team a great service. These days, Patrice goes about his business as though he wishes to be the next Josh Gorges, and it has been working in his favor. In that sense, Brisebois is giving merit to the notion that sometimes less is more. 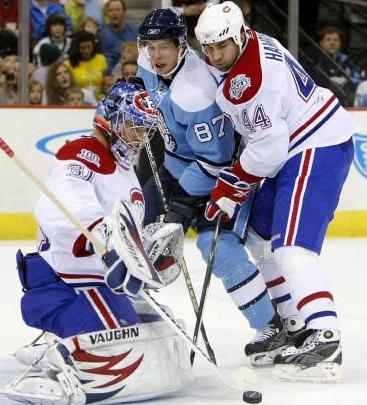 Far from being an unsung hero, the contribution of goalie Carey Price is not to be overlooked in the chemistry scheme of things. Goaltending has long been the backbone of many great championship teams, the Montreal Canadiens or otherwise. Teams often state that they are building from the net out, and Price has demonstated in just a season and a half that he is ready to be a cement block for the Canadiens future foundations. Not to diminish the worth of backup Jaroslav Halak, but the confident Canadiens team all fans expect comes forth when Price is in goal.

Price is a already a proven winner at two highly intense levels. Canadiens fans are just getting to know the charcacter of their latest masked man, and he seems to be shuffling the card deck of what the popular perception of the prototypical goaltender is all about.

Aloof and calm might not have ever seemed to be traits that a goalie could survive the heat in the Montreal Canadiens media frying pan, but Carey's personality seems to piss out fires before they are even ignited. His distanced, joking nonchalance might just be the ideal tonic for how a franchise goalie survives the Montreal madness.