Share All sharing options for: Lou Lamoriello's "Invasion Of The Habs Coach Snatchers" Curse Has Expired 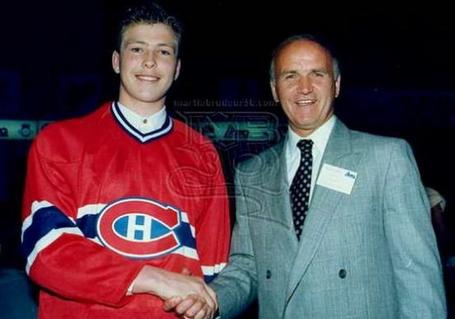 Is the New Jersey Devils head coach position to the Montreal Canadiens, what the NHL is to Sean Avery's ex - girlfriends? I won't use Avery's term as reference here, but Jersey has had a history of recycling a variety of former Habs alumni both behind the bench and on the ice, employing them to great use, all the while undoing the Canadiens in the most frustrating and mystical of ways.

From the practical bankrobbery of the official team photographer's son to their latest four goal game man Dainus Zubrus, it's almost inescapable when scanning the Devils lineup over the years.

Heck, the Jersey trappers have even managed somehow to get a former Habs favorite of mine - Turner Stevenson - and a most despised former Canadiens mascarader - Vladimir Malakhov - fitted for Stanley Cup rings!

Today, the Devils still employ former coaches Pat Burns and Larry Robinson in advisory capacities, but it looks like the curse may finally be coming to an end. 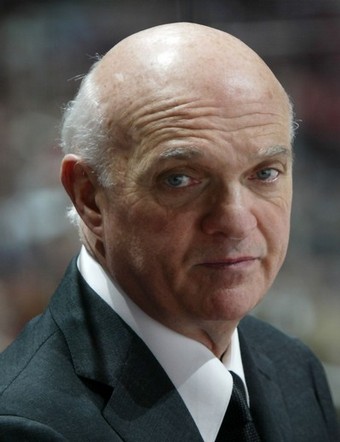 It may have all began in the summer of 1990, when the Devils flipflopped draft picks with Calgary and chose Martin Brodeur 20th overall. The Canadiens might have had their eyes on drafting Brodeur, who was practically playing in their own backyard, but with Patrick Roy on top of the world, they chose to go with Stevenson 12th overall.

This folks, is where a sort of karmic curse and Habs ghost syphoning took root.

Brodeur you see, was the son of Canadiens official photographer Denis Brodeur. The father had been working the Habs inside boards glass for a good decade by the time junior was born, and looking back it's as if his camera sucked in every great moment the Forum had witnessed during his tenure.

Like his son, the elder Brodeur had been a goalie, starring for Canada's Olympic team in 1956. Once he turned to photography as a living means, he shot every game and practice in the Forum until the early 1990's. 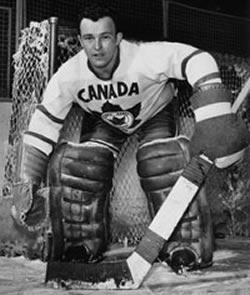 The legendary Montreal Forum ghosts, I believe, left with him, sucked tightly into the shutterbug's lens from 1994 onward. The Habs last Cup was in 1993, is it no coincidence the Canadiens have not won a Cup since, and his son has won three.

Isn't it just freakish karma that Martin Brodeur is now poised to break - maybe eventually shatter - some of Roy's greatest records, once he returns from injury?

In just mere days after the Canadiens last scooped up Lord Stanley's silverware, Lou Lamoriello changed the face of the Devils franchise forever, by luring the habitually reticent coaching legend in waiting Jacques Lemaire from the Habs assistant manager capacity to a place behind the Jersey bench.

Lemaire was a true purveyor of the trap's popularity and prominance. As a Canadiens player, and later, in a brief stint as their coach, he employed the tactic from the ice and from the bench to great effect, before the defensive ploy even bore a name. Realizing he had a wall in Brodeur, Lemaire quickly built a team concept around that style of play, and the Devils came within inches of upsetting the eventual 1994 Cup winning Rangers. 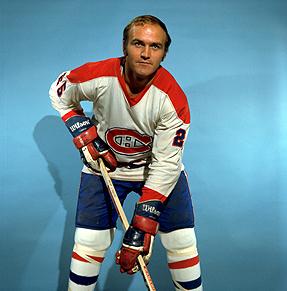 The next year, the Canadiens would miss the playoffs entirely for the first time since 1970, and in a player strike shortened season, the Devils would go on to sweep the heavily favored Detroit Red Wings in the Cup final.

Babies in the wombs of female Habs fans born that spring uttered "Ouch" as their first words.

To add insult to the pain, the Devils won with former Habs bad boys Claude Lemieux and Stephane Richer in their lineup!

A trend, with Brodeur as the backbone in Jersy, was just beginning.

It should be noted that prior to the Devils suiting up Brodeur, that no former Canadiens had ever dressed for the Devils in their short existence up to that time.

A precursor to eventual doom in dealing with the Devils due, may have had its root in what could have been a Habs GM Sam Pollock all time steal. On September 13, 1976, Pollock traded a pair of nobody's - Ron Andruff and Sean Shanahan - to the Colorado Rockies for a flipflop of their 1980 first round pick. 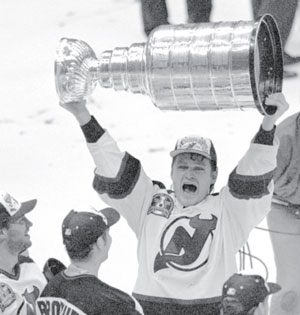 Here is where it gets kinda weird!

Shanahan was a cousin of future Devils first rounder Brendan Shanahan, who spurned the Habs in a free agent contract offer three seasons ago. Shanahan is currently still looking for an NHL home on the east coast, with the Devils as one rumoured destination. Sean Shanahan's cousin, by way of free agent compensation, eventually brought the Devils Scott Stevens, Brodeur's main ally in three Cup wins.

In the flip flop trade, the Rockies / Devils got a player named Paul Gagner. The french word for "won" is "gagner", which the Habs did, and didn't.

The Canadiens "won" the first overall pick in the 1980 draft. They blew it on Doug Wickenheiser!

Few of these players have been involved in one on one deals between the clubs. 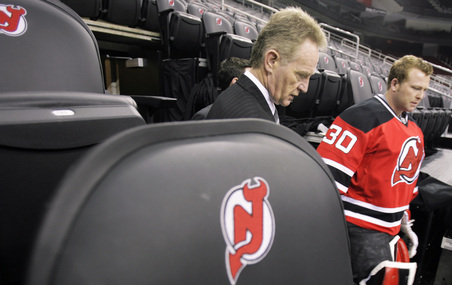 The Canadiens gained Muller, in the Richer trade, before Brodeur came on scene, and he was a big part of their last 1993 Stanley Cup. He came over with Melanson, and both are now part of the Canadiens coaching staff. Both Muller and Richer won Cups with their new clubs, call that one a draw.

Montreal didn't trade Tom Kurvers to Jersey, they dealt him to Buffalo for a pick that never reached the NHL. Kurvers, a few trades later, ended up in Toronto, who offed him to Jersey for a first round pick in 1991. Talk about maximizing a rental! To the Leafs horror, that draft pick was two choices away, third overall, from being Eric Lindros, first overall. Thankfully it wasn't Lindros. Instead, with the third pick, the Devils selected Scott Niedrmayer, who won Cups with the Devils in 1995, 2000, and 2002.

In another swap the two clubs made, I'd easily grab Sheldon Souray, in retrospect, over the indifferent Vladimir Malakhov anyday. Malakhov, as could be seen in willing, dedicated spurts, had an Orr and Coffee - like talent for blueline fluidity. Only Malakhov had balls smaller than Britney Spears' brain, and played only when he felt motivated. The Canadiens gained Souray for six seasons, enough time for him to set an NHL record for power play goals by a defenseman in 2007. Malakhov won a Cup in Jersey, Souray, well.....he owns that record still, for what it is worth! 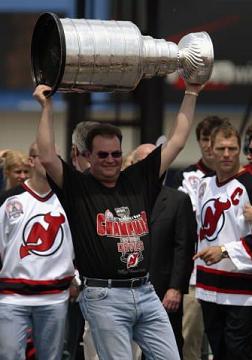 Most annoying of all, has been Lou Lamoriello's crush on grabbing up our Habs alumni as coaches. He's been all over them like Hugh Hefner on a bunny with a fistfull of Viagra! Lamoriello has shown an absolute brilliance, almost an evil genius, when it comes to nabbing his most successful bench bosses. After Lemaire in 1995, he later jumped on Larry Robinson and Pat Burns to guide the team to Cups in 2000 and 2002. .

Last season, in 2007-08, something helped the Canadiens turn the corner. Time will only tell what that could have been. The Canadiens, up until last season, had never won back to back games against New Jersey since Brodeur arrived in 1994. On February 24, the Habs came from behind, undoing the Devils trap to win 4-3. Some said it was the turning point of the Canadiens season.

Hot as hell from that point on, the Canadiens surged to the top of the Eastern conference. Along the way, they managed two more solid efforts against the Devils. In crucial March games, they beat them 2-1 on the first of the month, and then shellacked them 4-0 on March 11.

Could the spell of the Jersey Devil have been undone? Maybe it was the untimely and unethical firing of former Habs coach Claude Julien by Lamoriello two seasons ago that undid the voodoo! Julien strung off four straight wins against Montreal before getting the heave. For now, current Devils coach Brent Sutter (no ties to the Canadiens - thank goodness!) has a losing record against Montreal. 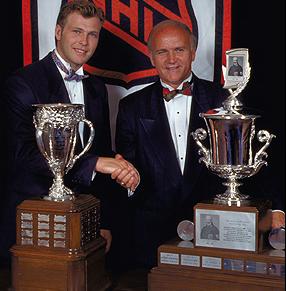 Last week, when the Habs were struggling and chatter began to build regarding a possible firing (nuts!) of Guy Carbonneau, a friend of mine and I were discussing the one day scenario.

"No team would hire Carbonneau after that", was his opinion.

"Duh! He's be scooped up Jersey in no time flat!"

Hell, let's not even go there!

Perhaps it is another good omen for the end of this hellish cycle that Brodeur - who will not face the Habs tonight - was injured just a few weeks prior to breaking Patrick Roy's all time wins record. It allowed Roy to have his jersey retired in Montreal with his wins record intact for the time being.

Could it be finally that after all these seasons, the Canadiens have at long last put Brodeur and the Devil's to rest?