Share All sharing options for: Leafs Hand Habs A Hockey Lesson, And Expose Carbonneau's High Wire Risks In The Process 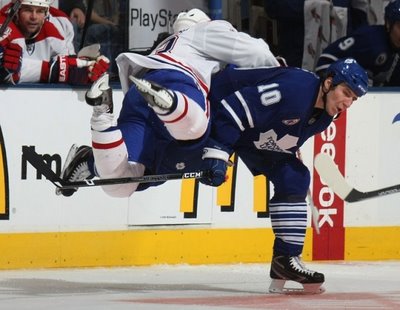 Raise your hands all those that didn't see this coming!

You in the back with your arms angrily folded, step to the front of the class!

So far this season, the Canadiens are not playing as a focused and cohesive unit. Their 8-2-2 record is not representative of where they are by any means.

After busting out of the gate with a 5-0-1 record to start the season, the Habs have since stunk the joint out by going 3-2-1. Since the seventh game of the present campaign against the Ducks on October 25, they have allowed 22 goals against, while scoring only 19.

The most recent wins against the Wild, the Hurricanes, and the Islanders were almost accidental in nature. In Minnesota, the Canadiens were lucky that the Wild misfired on ten powerplay chances. They needed a shootout to defeat Carolina. Last Saturday, they struggled desperately to come from behind and beat a weak and confidence lacking Islanders club

Last night, the Maple Leafs dealt the Canadiens a lesson in focus, intensity, and hard work. You could also add humility to the growing list.

Cliches in sports have long been invented to explain away what has infested the Canadiens of late.

No game is won before it is played.

Hard work and dedication will beat skill and talent when it doesn't work as hard.

All three of these old adages apply to the loss against the Leafs, and the Canadiens should be feeling quite humbled about now. 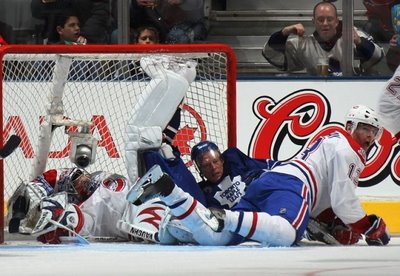 The Canadiens showed up to play the same doormat Maple Leafs squad they easily handled 6-1 in the season's second game. The trouble was, that Leafs team was not their opponant last night. Instead, a hungier and more focused club awaited them, and in the final tally, it was the Canadiens who failed to show up and bring with them an equal appetite.

Part of the Canadiens recurring problem is that they know how good they are. Or at least they think they do. A hockey team might be like a rock group, wherein they are only as good as their last record. The last time I checked, the Canadiens haven't won anything of significance recently.

Some of the Canadiens wins at the start of the season weren't pretty either. The Habs have enough talent that they can often turn a game around within minutes. Learning to rely on that fact is a catastrophic recipe for disaster. The come from behind win against the Islanders, and even the late goal against the Blue Jackets the night before that allowed the team a point in a loss, tends to fuel the notion that they can pull irons out of the fire at anytime.

Last night provided another example. With Toronto ahead by two goals, the Canadiens profited from the Leafs indiscipline by notching a pair of goals on the power play to tie the game. I gather such only served to bolster their overconfidence. What they failed to grasp was that Toronto handed them the opportunities, the Canadiens did not earn them with hard work.

Three successive calls in the Leafs offensive zone, all three for running the goaltender, opened the Canadiens window. It was not the Habs thrusting in the Leafs zone that fed their chances. Once the Canadiens had evened the score, it was as if a forthcoming win was taken for granted.

What disgusts me most, is that even by that time of the game, the Habs had yet to seize that their opponant was their equal.

It should be drilled into this team's collective consciousness that the Toronto Maple Leafs are always going to be a formidable foe, irregardless of what they appear to be on paper, or what their current record is, or how they have played in recent games. The Maple Leafs live, exist, and yearn to eat the Habs alive, especially in a perceived underdog's role. 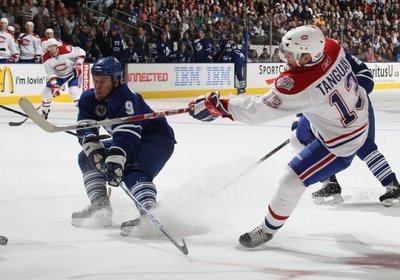 The Canadiens approached last night's game as though it had already been won on paper.

But why on God's earth would the Habs think they were in for an easy night against Toronto. The Leafs have beaten the Red Wings, Bruins, Senators, Devils, Rangers, and now the Canadiens so far this term - not a sad sack team in the lot. Coach Ron Wilson is the big difference maker. He has his team poised every game, and playing with a do or die edge.

I'd like to see such a temperment instilled into the Canadiens players!

Perhaps the Canadiens are subscribed into the illusions and distractions brought on by the perceptions of themselves by fans and media. In a celebratory one hundredth season, it isn't unlikely.

Maybe it is because there has been no shortage of excuses to pamper their failures game in and game out, even when they win ugly.

It could be that coach Carbonneau isn't hard enough on the team. I see unflaged accountability issues everywhere I look on this team, yet the team's slow start in games is most often blamed on a schedule that gives them too many successive nights off. What a load of crock!

I like Guy Carbonneau as a coach, but sometimes he could be accused of tiptoeing around things when a hammer ought to be employed a bit more liberally. Most of the Canadiens players this season are doing all kinds of good things on the ice, yet their errors seem to be swept under a collective carpet of absent denial.

These issues do not go away by themselves. They need to be confronted head on.

On ice indiscipline on this team is a recurring issue. Two seasons ago, when Carbonneau was a rookie coach, I could understand that calming such habits was a work in progress. Last season it seemed to be dealt with, but it has made a return this season.

When a former players such as Carbonneau become bench bosses, their disrespect for the game's officials follows them. I'm not privy to Carbonneau's words in the heat of action, but his gestures, mannerisms, and consistent facial smirks speak loudly enough to broadcast his opinions.

Players pick up on such vibes, and the attitude becomes contagious. A coach needs to mute such disgust to unseen and unheard proportions, because it affects his players perceptions greatly. Bad officiating gives all players an excuse, and an out, when a coach publically displays a vivid displeasure on controvercial calls. The next bad penalty they take, will always be the referee's fault, in that line of thinking. Trouble often begins when accountability goes off compass. 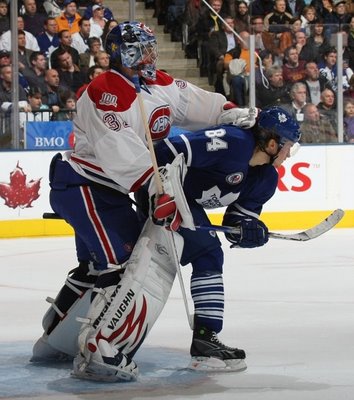 There's another old sports cliche, mostly passed among coaches: Give players an obvious excuse, and they will run with it everytime.It is the nature of the blamed. A coach who is a former player of 20 NHL seasons ought to know this much, and learn to control his every reflex towards that. He's only passing along bad habits if he doesn't reel the instinct in.

Another Carbonneau goof came at the term of training camp, when he was discussing the composition of the teams individual lines and their roles on the club, In boasting of the Habs apparent offensive gunpowder, Carbonneau publically stated that there was no particular trio of the four whose role was mainly to act in a defensive mode.

All four lines had scoring punch, according to the coach, and all four lines would also be tasked with both offensive and defensive responsabilities. To that end, and with an eye on not damaging any egos, the coach also added that the club had no defined number one line as well.

Twelve games into the season, those proclamations may have served to cause the Canadiens current strife.

Roles need to be defined and underlined specifically on a team. Tasks need to be outlined and detailed to precision without fail. Barring such understood definitions creates a finger pointing atmosphere amongst the team, where players blame others without a word being said rather than take responsability for breakdowns themselves.

Ignoring all of this is a recipe for a rot that can eat at a team's core - witness the Ottawa Senators 15 games into the 2006-07 season for an example of this.

Added all up, the Canadiens are an indisciplined team, skilled but over confident, ill prepared for what is at stake in each game, and unaware of forthcoming consequences. It is becoming obvious enough after only 12 games that other teams are learning how to prey upon such cracks in the foundation.

A redefinition of the team is required in order for the Canadiens to carve out an identity that suits their ultimate goals.

It all starts at the top, with corrections made by those who call the shots.