Share All sharing options for: Habs Fans All Star Prank An Embarrassment 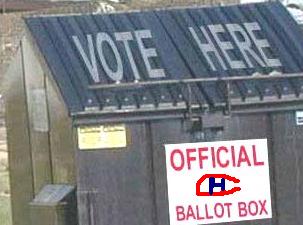 For once I have to agree with the Habs haters out there, and this dumb prank just gives them fuel to spread their wrath.

Just a few days in the 2009 All Star game, six Canadiens players are leading all six starting positions for this year's game. At first the notion of it is kind of fun, as all of Price, Koivu, Tanguay, Kovalev, Markov and Komisarek are players deserving of being in the mix this season while enjoying fairly good starts in 2008-09. The fact that Habs fans would vote often was to be no big surprise.

While everyone recognizes the passion of Canadiens fans, and would have expected them to show up en masse to vote their faves in, it has come to light that certain fans have created "auto voters" that run automatically by voting for a player on a per minute basis 24/7. Fans can literally washthe dishes, make babies, and snore while voting.

Call it what it is - cheating, and term some Habs fans for how this nonsense makes them look - pompous and arrogant, but where something like this really gnaws at me is that it paints all Canadiens fans with one brush. And I don't like the colour of the paint!

It also taints the organization for no reason, and quite rightly perhaps, the NHL, who in all their shrewdness, can never seem to get this All Star game voting thing right for once.

I won't link to this "auto voter", show a scan of it, or spread the word on it further, because it is simply despicable.

I would have liked to cast a vote for Saku, Kovalev, Tanguay and Markov, who I hope to see play in the game, but I now will not. If they were to legitinately get in, along with Komisarek and Price, it would all be good.

As it looks now, the Canadiens will have six starters in the game, and the feeling from the Habs fans, to fans of hockey everywhere, and perhaps even to the players themselves, is that a particular slanted mechanism was used for getting them all in.

Trust me, if this scheme works, it will be an embarrassment to everyone involved.

In a season where the Canadiens should be greatly celebrated by their fans, and the fans of the game hockey everywhere, a devious ploy like this just stains the club from top to bottom.

Somewhere, some twit without much of a life devised this crock, and now all Habs fans will pay for it. Nice move to undue all those seasons of class and dignity by the team.

If you personally have employed this auto vote gadget, please cease to now. The perception of yourself as a fan should be more important to you than getting our guys into some meaningless game anyway.

Do the right thing.

The All Star game is for all fans especially. Not just fans of two teams like any regular game, and not just for Habs fans.

I call for the NHL to cancel this vote, and redo the process, with some kind of blockers in place. The sooner, the better!