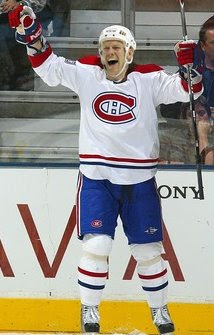 As per RDS and TSN, the Montreal Canadiens have renewed talks with unrestricted free agent Mats Sundin.

Canadiens general manager Bob Gainey met with the 37 year old Sundin in California on Wednesday in hopes of restoring talks between the two sides.
Sundin has been working out in Los Angeles since early November, where he is expected to begin skating next week.

However, while Sundin is showing signs of returning, he hasn't made any decision yet.
In mid September, the Canadiens acquired forward Robert Lang from the Chicago Blackhawks after deciding to move in a different direction from the Sundin sweepstakes.

"We had developed a priority and had we been able to entice Mats Sundin to comeback and play and comeback and play with the Canadiens, we would have done that as early as June of this summer," Gainey explained at the time.

"(Sundin) didn't give me any indication he was going to make a decision and my hockey department and I were not prepared to wait for a player who may or may not decide to play in November, December or January or February."

As many as six teams have expressed interest in Sundin's services, including the Canadiens, Toronto Maple Leafs, Vancouver Canucks and New York Rangers.

Last season, Sundin enjoyed one of his best seasons, finishing with 32 goals and 46 assists for 78 points in 74 games and leading Toronto in scoring for the fourth straight year.