Don Cherry Was Almost A Montreal Canadien, Not!

Share All sharing options for: Don Cherry Was Almost A Montreal Canadien, Not! 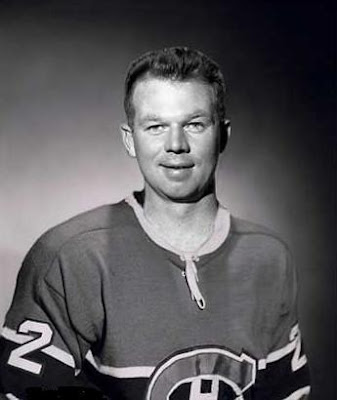 Everyone has heard the old Don Cherry tale of playing his lone NHL game against the Canadiens in the 1955 playoffs. Few people realize that Cherry once donned the Habs jersey he would later grow to despise.

Who knows the real story, but it is doubtful an accounting would come from Cherry himself!

Cherry started out in junior as a solid prospect on defense who was signed to a confirmation form (C - Form) with the Bruins in the day. After his first pro season in Hershey, he was called up by the Bruins in March of 1955, to play what would turn out to be his only NHL game.

Did the Habs burn him or what?

All that is known from the game, is that Boston didn't win it.

The Canadiens went on to win the series 4 to 1, but then lost in the Cup final to Detroit in seven games.

In the 1959-60 season, Cherry played the final 23 games of the season for the Trois Rivieres Lions of the Eastern Professional Hockey League. The 25 year old defenseman had been acquired from the Springfield Indians and was in the midst of becoming a journeyman AHL'er. Soon he would play for eight different teams in the next ten seasons.

With the Lions, he was a team mate of future Rangers dynamic duo Rod Gilbert and Jean Ratelle, and one time Habs forwards Dave Balon, Leon Rochefort, and goaltender Claude Evans.

The Canadiens organziation sponsored Quebec based teams and players in the EPHL, and obviously became acquainted with Cherry at the time. After Cherry played with Kitchener, Sudbury and Springfield once more, he was looking to remain in the EPHL, where he had forged a reputation as a tough and dependable rearguard.

Prior to the 1962-63 season, it appears that Cherry was given a tryout by the Canadiens, playing a few exhibition games with the Hull Ottawa Canadiens of the EPHL 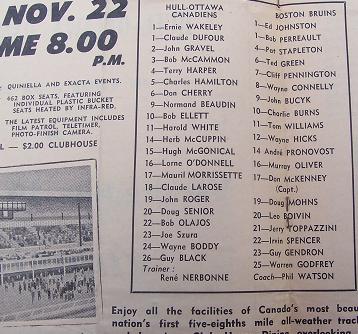 Cherry wore number 6 and played in at least a few exhibition games for Hull, as noted by this program for a game against the NHL Bruins.

Curious that an EPHL team would play against an NHL club in exhibition. The Bruins in the day were the NHL's weak sisters, and the Canadiens farm club was a strong minor league affiliate loaded with talent.

Few remember Cherry's brief stint in the CH duds. It is likely only after he became famous as the Bruins coach, and later, even more reknown from Coach's Corner, did anyone likely recall his Canadiens cup of coffee.

Of the few recollections from that time, word arises that the team liked Cherry enough to invite him. It is often discussed that the NHL Habs were on the lookout for players who weren't afraid to drop the gloves, and that is where their interest in Cherry may have came from. The following season, the Canadiens signed John Ferguson, and settled the issue of team toughness in one fell swoop.

Why Cherry didn't stick with Montreal could have been that he liked to tip the bottle a touch too much for the liking of GM Sam Pollock. The tryout ended as soon as it began, and the 28 year old went on to sign with the Spokane Comets of the WHL. The Comets had an affiliation with the Canadiens as well, employing the three goaltenders named above, as well as Cherry for the duration of the season.

Cherry then moved on to the Rochester Americans of the AHL, where he would play parts of the next six seasons, in a veteran leadership role that led to his interest in coaching. In Vancouver, he crossed more Canadiens affiliates, in Marc Rheaume, Gagon and goalie Charlie Hodge.

The Canadiens meanwhile, were busy winning four Cups in five seasons from 1965 to 1969.

Were francophone sour grapes born from this?