Canadiens Team Effort Could Be A Turning Point

Share All sharing options for: Canadiens Team Effort Could Be A Turning Point 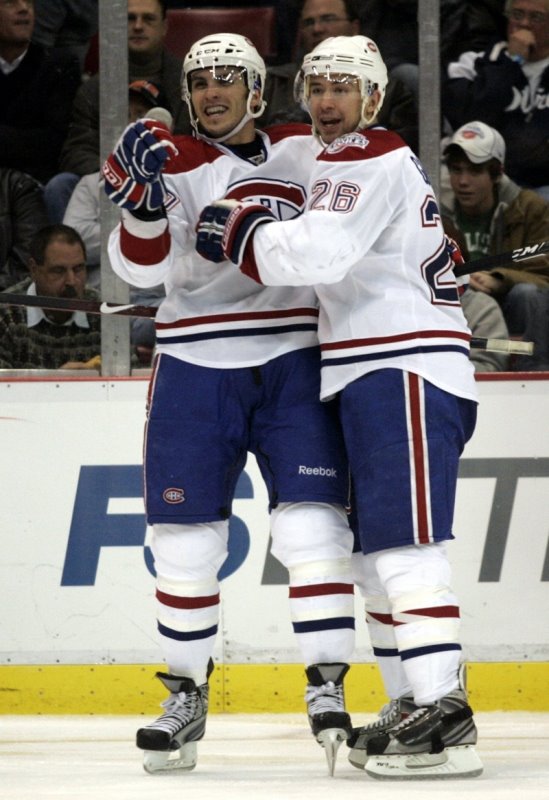 Bust open the bandwagon doors, your Habs are back!

How quickly perceptions of a team can change upon one simple convincing win!

Beating the Red Wings in Detroit is no small claim in the course of a long season. For a team that had been trudging precariously along for a month, it is a peak and compass point, a moment for reflection, and a weigh removed from a burden, all in one.

If, as a fan, one sound win such as this can alter your faith and perceptions, you can just imagine what it will do for a team desperately needing an injection of self esteem and identity.

Between periods, Habs forward Chris Higgins brought up an interesting point during an interview. When asked how the team would fill the void in light of leading scorer Alex Tanguay's injury, Higgins didn't flinch. In essense, Higgins spoke that with everyone on the team paying the same way, it just didn't matter.

These guys were on a mission last night, and the reward was self rediscovery.

The group wearing the blue, blanc et rouge on Wednesday were cohesive and unrecognizable. Poised, patient, and with purpose. Calm, while appearing intent. They looked as though they were being coached for the first time in a long while and reacted by playing the game as units of five rather than a scrambling bunch of improvising individuals.

What the club displayed was hockey in its most primitive and basic forms. They started by doing the little things right, paying more attention to detail than they have since the season began. Even better, the exhibited an enthusiam rarely seen, for doing such plooding workmanlike tasks as beating an opponant to the puck, only to place a soft dump down the ice because the situation called for it. 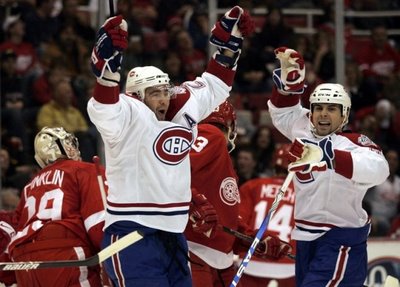 Hockey is a game that is popular because of its flashes and artistry on ice. It bursts alive with dazzling manoeverisms of the puck at light speed. It captures your guts and imagination with smashing body crashes and reckless displays of wild abandon.

Winning at hockey, for a great part, involves snuffing out all these exciting aspects with tactical discipline and boring repetitive defensive management. Traps and walls, dumping the puck, and playing safe have no markee value, but they are effective when employed by groups of five lie minded players.

The system has its merits, as it allows are players buying into to it to shine when work is well done. Before teams can expect to razzle dazzle its way to the top, it must first learn command of the basics.

The Canadiens, with the win against Detroit, began building a unity of purpose that should serve them well in the coming months.

Working as a group within a cohesive system made everyone on the team look good for the entire game. In fact, it was as close to a perfect win as had been seen by this club in recent memory.

All during the game, the non stars of the team shone brightly. There was the always calculated Josh Gorges, commanding his position so effectively that you could just see the full potential of the player displayed on every shift. Often seen as a bottom pairing rearguard, by seasons end, he could be regarded as the Habs most reliable blueliner. He's going to run away with the Jacques Beauchamps unsung hero whatevertheycallit award. 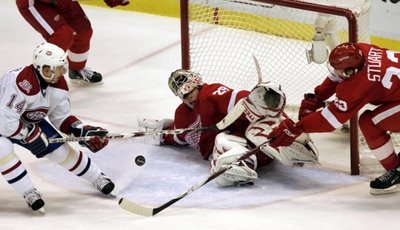 The fourth line bangers and zealots - Begin, Lapierre, Kostopoulos, and Dandenault - all wreaked havov consistently on Detroit's best wheels. They played like hellhounds, chasing down every loose puck, and poised to upset everything in their path. It's no coincidence that since Begin has reintegrated the lineup, the club has played sounder defense over the course of full games. His play has lit up Lapierre's game as well, and they are starting to get their due.

Carey Price had something about him in last night's game that had rarely been seen of late, the confident calm of an assured puckstopper. Price was focused so, because the mates in front of him allowed such a demeanor. He was not once caught out of position, never appeared distracted, and played as though the puck looked large to him.

The grinders on the team seemed to inspire the previously misguided offensive core into a more pronounced and deliberate effort. Players such as Kovalev and Plekanec played much better because instead of taking chances, they created chance by avoiding the lure of individual risks. You could see they were buying into a game that brought everyone along, rather than trying to carry too much responsability on their own.

It's tempting to detail each players contribution all down through the lineup, but in context, what each did was similar on the whole. It is how the Canadiens have to approach beating a team that plays like a team such as the Red Wings. Beating Detroit takes a group effort, and this is knowledge the Habs can use against any opponant.

Friday against Washington, with the likes of Ovechkin, Semin, and Backstrom in their midst, the same effort should yield the same reward. Should the Habs procced in the same manner and emerge victorious, it will be because they have begun to take themselves seriously.

That can only be good news!

Photos coutesy the Montreal Gazette / Habs Inside Out