Share All sharing options for: Canadiens Lacking What Begin Brings 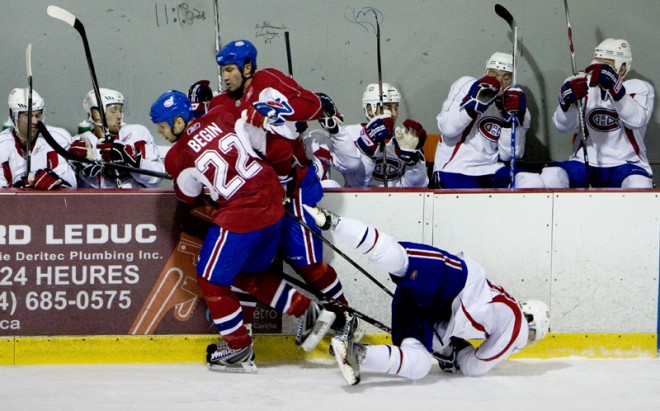 According to Canadiens coach Guy Carbonneau, the Habs played what was possibly their best game in two seasons last Tuesday, when they blanked the Ottawa Senators 4-0 to rebound from what the coach called their worst game in the same span, a 6-3 humiliation two nights prior against the Maple Leafs.

Perhaps the Canadiens just found the one rival in their path with a slower pulse in the Senators, because two nights later, the Habs stunk out the joint against the Bruins.

Truth be told, Ottawa is about as dysfunctional as the Tampa Bay Lightning most nights, and beating them shouldn't have been anything to get excited about. Heck, two nights later, the Islanders handled the Senators with ease, and so went the theory the Habs have cured any of their ails.

Without the benefit of anything more than video evidence to suggest only part of the story, the Canadiens seem in need of some kind of a boost.

To echo the phrase uttered by former disposed coach of the year Orval Tessier, the Habs have looked like they are in need of heart transplants of late.

I call chemistry into question. More precisely, the lack of it.

All kinds of adjectives could be employed to describe the Canadiens recent play. They could include sluggish, uninspired, individualistic, unfocused, distracted, and without heart.

One of the more popular topics of late, when discussing the Habs woes, is the contribution of Georges Laraque, hired to make the entire team taller by a few inches. Or so, it was billed.

Laraque hasn't exactly carved out his niche on the team as of yet, and it wouldn't be a stretch to claim he has been a glaring non factor in almost every game he has been dressed for. Playing on the Canadiens fourth line - an energy line in essense - he has made slow footed Guillaume Latendresse look like Paul Coffee by comparison.

I can't fake it. I like the guy, but there is no polite way to say that Laraque has done absolutely squat so far this season. 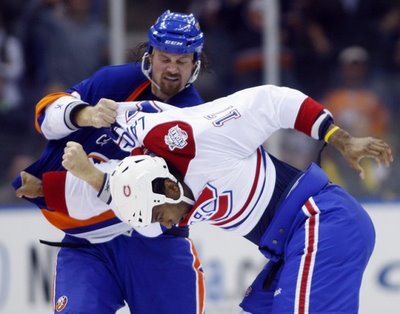 Some might suggest that last Tuesday, Laraque's presence kept Ottawa's Chris Neil quiet. That would be true, if they had actually lined up against each other on the ice when the score of the game was still being contested.

While others have contemplated what Laraque is or isn't bringing each game, I have missed what dressing him each game has eliminated, namely the contribution of energetic fourth liner Steve Begin.

Since popping in the insurance goal against the Flyers in the third game of the season, Begin has sat out 8 of the last 11 games this season. He's almost become a afterthought in the Canadiens scheme of things. His name is often mentioned in the same sentence as the phrase "days are numbered" when it comes to his contribution in team terms.

Now, no one will confuse Begin with being nothing more than a simple role player, but here is where putting his role, his traits and attributes, and his dedication come into importance. He brings to the Habs, a deckful of intangibles few players on the team can boast of.

Feel free, if you choose, to see Begin as simply a player who has been the victim of a trio of bad timing penalty calls in the last season and a half. So the guy is overexhuberant - I wish that could be said about a half dozen nameless others. 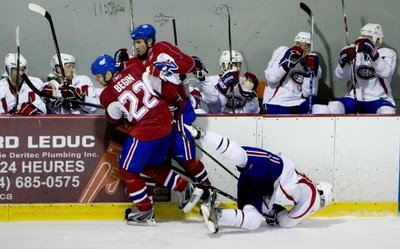 Begin has the third longest tenure on the club, after Saku Koivu, Andrei Markov and Patrice Brisebois - who skipped two seasons. He was actually Bob Gainey's first acquisition upon becoming the Canadiens GM in the summer of 2003. That tenure, and the path taken, means something to the team chemistry.

Allow me to bring up these questions:

Have you ever seen Begin coil when it comes to dropping the gloves in defense of team mates?

Have ever seen Begin back away from a hit?

Do you know that, as a member of the Saint John Flames in 2001, Begin was voted playoff MVP despite not being his team's leading scorer?

Begin knows what it takes to win, and what it takes to create a winning atmosphere. He's a wild card's loadful of intangibles, enjoying a press box view while the Canadiens lack all the things that he could bring on a game by game basis.

Begin might just play ten minutes a game or less, but he spends the other fifty on the bench yapping. Knowing his character, his contributions eminate from there as well.

Would it be a drastic alteration to the Habs game plan to play him regularly and gauge his effect on the club for two weeks?

As I watch the Canadiens dedication issues lump into a pile, this is one managable move that would barely be cause for friction.

It's time for an injection of heart - it's cheaper than a transplant!.