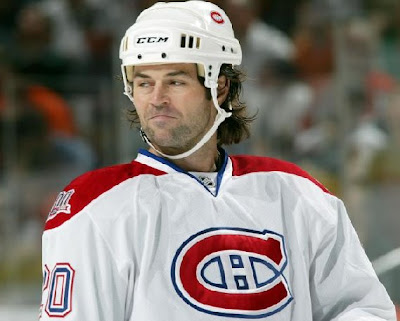 What was most likeable last night's sixty minutes of hockey against the Flyers, and in Saturday's win over the Leafs, was in witnessing how certain Canadiens players have evolved over last season. The progression of the young players is often a thing taken for granted, but watching them gel with equally motivated veterans is purely a thing of hockey beauty.

In just three games, I've noted some significant differences in the way players are approaching and embracing their roles on the club.

Alex Kovalev, has had a handful of great flashes already, but he doesn't appear as burdened with the notion he has to carry the team on his back like before. The translation of an urgent Kovalev into a more relaxed and defined attacker could prove to be addition by subtraction. 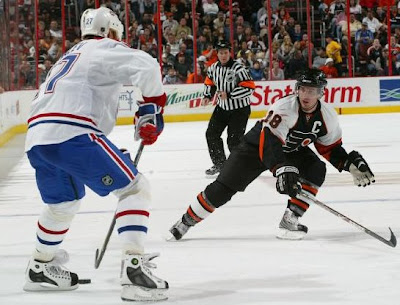 As the team's most offensively gifted player, the focus on Kovalev has always been extreme. With the progression of linemates Plekanec and Andrei Kostitsyn into forces of their own, the focus on Kovalev has been lessened. The reduced puck time could show Kovalev to be equally dangerous without it, as he now becomes a delicious option for his linemates, rather than it consistently being the other way around.

It used to be that if a team were able to grind Kovalev into a quiet game, the entire line was shut down. That's not likely to happen much anymore.

As the Habs lineup has suffered little turnover in the past few seasons, players have adapted more to all that Kovalev does. Again, in the less is sometimes more analogy, it has freed him up to do different things. A Kovalev with more options, and an added split second to play with, is a scary proposition for opposing teams.

In Toronto on Saturday, Plekanec found Gretzky's office, and the immovable Kovalev was an unlikely recipient parked on the edge of the goal crease. It was quite the unfamiliar scene.

So was him finding a dashing Roman Hamrlik early in the third for the game tying goal.

Hamrlik is obviously comfortable moving up on the play, even in four on four action. It takes a level of confidence in team mates to pull such risks, and his security in knowing he is covered speaks well for the team as a whole. 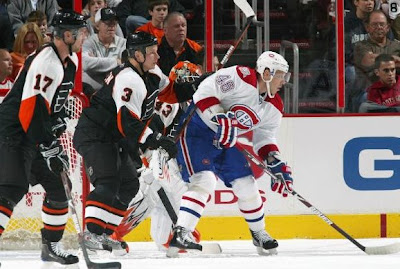 Andrei Kostitsyn made a pair of great individual plays to begin the second period. They showed his game reading skills to be progressing quite nicely.

On a Flyers breakout, he was in deep flattening Mike Richards to break up the play and turnover the puck. As soon as he recognized his team's possession, Kostitsyn got onside, received a pass, and fired a screened bullet through a defender past a stunned Martin Biron.

Last season's Kostitsyn might have taken a second or two longer in getting up and onside, and likely would have tried to beat that defenseman one on one, turning over the puck.

Don't be at all surprised to watch the elder of the Kostitsyn brothers hit for 35 to 45 goals this season. His confidence and hunger almost predict it.

Robert Lang has so far brought what was expected of him, and it has been a treat in getting to learn what it is he is all about.

Lang has all kinds of talent. He has a wicked shot, and above average passing skills. The knowledge of how to find open space in a hurry, or recognize when another player is about to gain it. He does not seem as slow or as hesitant as was advertised, but actually seems awfully motivated to deliver the goods.

The impression I get of Lang, is that while he is perceived as a one year rental player of sorts, he is poised to make himself an indispensable asset on the club. It's as though he is saying that he's comfortable as a third line center, and by the end of the season, he'll show that the Canadiens won't find a better suited one.

Alex Tanguay has had some roadbumps getting in synch with Saku Koivu so far, but it is only natural for two players whose games are so carved out and defined after many years in the league to take some getting used to each other.

What has revealed itself so far, is that it is Tanguay's play that commands the line. Koivu's workload is in the process of being redefined. As a center who in the past often had to do much of the winger's work as well as his own, it will take the trio some time to get used to the makeover.

In previous years, Koivu has not only had to be the setup man for Ryder and Higgins, but he has also consistently been the second man into corners. It has led to him taking many seemingly desperate penalties over the years - hooks and slashes behind the play - and contributed to wearing him down earlier in the game than anyone would like.

With Tangauy able to work the puck as well as Koivu can, the line is freed up to approach things differently. Similar to Kovalev without the puck, Koivu is now able to complement his linemates in a different fashion, by being the recipient or the player on the edge of the crease. 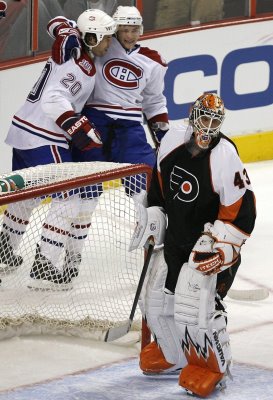 Having Guillaume Latendresse use his better assets on this line also enables more options for Koivu and Tanguay. Latendresse has more size and reach than Ryder had or Higgins has, and with that he is better suited for one on one battles in the corners. How difficult he is to move off the puck is an often underrated facet of the big winger's game, but it can now be adeptly used to buy time for his mates.

Depending on where the puck placed, and the tightness of that possession, either Koivu or Latendresse will be heading for the net and bringing a player with them. As the line has the skills for better battling, passing and shooting options, it makes them more chameleon - like, and harder to pigeonhole as per tendencies.

It will take some time for Koivu to get used to not running interference for Higgins cycling out of the right boards, or having but Ryder as a triggerman on the opposite side in the high slot.

So far, even through some miscommunications between Tanguay and Koivu, one can already see the potential in the line developing. Fans will get to see a whole set of unfamiliar moves from Koivu this season, and they will begin to understand what a set of shackles having Ryder as a line mate was.

Perhaps the biggest blooming of a player I've seen so far, has been in the play of young Sergei Kostitsyn. I actually cannot rave enough about him so far.

It is difficult to see yet where he fits in best on the team, as he actually gels and plays great with just about anyone. He can bring a whole different set of skills to Koivu's line, just as he has so far done playing with Robert Lang.

When employed on the powerplay, his workspace involves his entire side of the ice, from the circle to the net, and back to the point. What enables him to be so dangerous is his vision. That he can adapt and play with anyone is quite a skill card, but the fact that he actually uses all his options is even more threatening.

Added to that whole package, is an obvious keeness to shoot more and go head first into rebounds. Throw in that he is brazen little bugger when it comes to battling for the puck and that he is defensively sound while being offensively unlimited, and you have yourself a player who has likely only showed the tip of the iceburg so far.

His training camp was a touch on the quiet side, but there he is after three road games, leading the club in scoring. There will be no sophomore jinx here!