The Peeling Away Of The Alex Kovalev Enigma

Share All sharing options for: The Peeling Away Of The Alex Kovalev Enigma 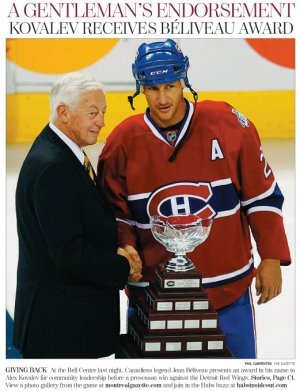 The two words have been synonynous for close to four seasons now, but it is a perception that is fading.

Alex Kovalev, for all intents and purposes, was not so much reborn last season, as much he was rediscovered.

A paradox of conflicting adjectives have always attached themselves to Kovalev, beginning with multi talented, moody, dazzling, misunderstood, dramatic, game-breaker, nonchalant, otherworldly, overpaid - with the end result being enigmatic.

It has always been a difficult assessment to settle on what Kovalev truly was, and it was forever frustrating to fans, media, and perhaps even team brass.

I, for one, called for him to be cement blocked after a his dismal 2007-08 campaign, which saw him sink to burnout levels of lackadaisical play. He has since made many a critic eat their words, and I'm still chewing on mine.

Prior to the start of last season, a Bob Gainey who never lost faith in him, prompted Kovalev, through a pair of friendly chats, to do a summer of soul searching.

For a word that rarely if ever came into play when describing Kovalev, he sure found he had it in him.

The change, (or apparent perception of it in Kovalev), from one year to the next has been....well, dramatic! 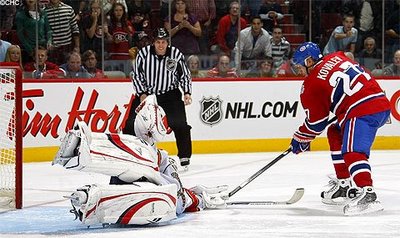 From a season in which he was bugged by sore elbows, had complained of vertigo, and was rumoured to be gnarling to Russain media concerning his woes, Kovalev transformed himself into a player and a man deserving to adorn the captain's "C" for a series of games, while leading the team in scoring with 84 points.

Along the way he was named to the league's second All Star team, was a runaway winner of the Canadiens Molson Cup, and was in many opinions and polls, the NHL's Comeback Player Of The Year. Some even termed him the league's unheralded MVP.

As a team member, Kovalev went from being a lost aging veteran searching for his misplaced identity, to a resurgent leader and a mentor for those making first steps on the club. Kovalev didn't only improve himself in his renewal, he brought along a whole team and helped make it better.

Kovalev was as much a story off the ice as well. Articles detailing his chat with Gainey, his embassment over being passed on by the Russian National team, his visit by plane to a northern Quebec fan, and his launching of a DVD for the benefit of kids with heart ailments, all bespoke that there was much more to this man than meets the naked eye.

All summed up, it wasn't too shabby for finding one's soul!

The culmination of the Kovalev Consecration came earlier this week, when he was announced as the Canadiens 2008 winner of the Jean Beliveau award for community service and dedication.

Now there's two players whose names surprised many, by somehow belonging in the same sentence.

From this point on, the perception of Kovalev as a complicated individual has been dropped.

So should ideas and thoughts that Kovalev has somehow been reborn or that we are rediscovering him. As much as we like to believe we know our professional athletes, we never truly do. If one chooses to look inside the right things, one can see that Kovalev has been true to himself all along. 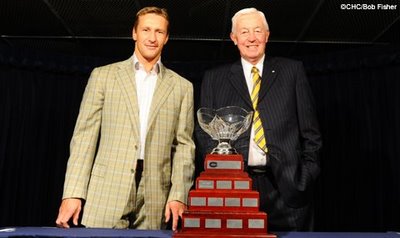 What has unfolded is that Kovalev is perhaps finally comfortable enough with himself in this place that is the madness of Montreal hockey, and that he has now allowed us to get to know him better.

It seems to be something that has come through our newfound appreciation for him, all that he does, and all that he has done.

He loves Montreal, and he feels Montreal's love right back.

Often in the past, Kovalev was compared to Guy Lafleur for his on ice artistry and dressing room quotability. The comparision was always an alluring one, but off somewhat. Maybe a better one would have been Pierre Larouche, whose stay in Montreal was brief and highlighted by controversy.

The way I perceive Kovalev now, is that he is equal parts Lafleur, Koivu, and Beliveau. A showman, a battler, and a man of class. The alchemy of such a mental makeup, combined with a personal flair for going outside the box, are what makes him so charismatic.

A player such as Kovalev, who often defies the norm, is usually berated for the things he is not, rather than being appreciated for what he is.

There truly is nothing more appealing in Montreal than witnessing a player in full bloom, even late in his career, adoring his stage and enjoying his fans. Even more heartwarming is to see the player return in kind, giving of himself to the community in true Montreal Canadiens spirit.

Kovalev has recently stated how he wishes to finish his career as a Montreal Canadiens player, and one day have his photo next to other legends above the dressing room stalls.

It would fit there neatly one day, should Kovalev continue to aspire, and inspire. In a timeline thread of Canadiens offensive dynamo's - Morenz, Rocket, Beliveau, Lafleur, and now Kovalev - there is surely a common seam.

As a team once known for it's Flying Frenchmen, but now morphed into a French Foreign Legion of sorts, Kovalev could be the player whose photo comes to mean the most - along with Patrick Roy's - for the next generations of Canadiens greats. Europeans grafted to this current lineup and those to come, will fawn over Kovalev as a sacred Hab just as Max Lapierre and Guillaume Latendresse stare back into the Rocket's fixed glare when lacing their skates.

Every gesture and act by Kovalev, speaks that he wants to be that man. 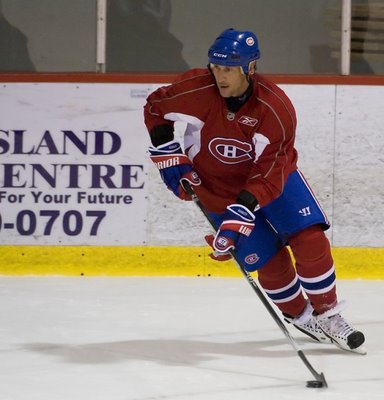 Rumours have begun that Kovalev has already begun discussions on his next Canadiens contract. Word is that his asking price is quite reasonable and team oriented.

Word is that the contract would be based on a two year deal, followed by options for renewal based on production, with out clauses for both the club and player similar to the deal structured by Daniel Afredsson with the Senators. Word also has it that it is Kovalev and his agent who have laid out this scenario, based on him wanting to remain with the Canadiens. As I heard it, there is not a significant raise involved, but merely a slight one.

With many potential free agents, both restricted and unrestricted, on the club next season, a deal in this light by Kovalev could truly set the tone for further negotiations from other players.

If a new Kovalev deal were to preclude the demands of other players, and set a tone for future negotiations, he would again be leading the way. His deal would align those of Koivu, Tanguay, Komisarek and Higgins in perspective, and would help the team quickly sort out which current Habs players are in it for the long haul, or for the big haul.

For years now, a precious dream of mine, when I close my eyes, is the vision of captain Saku Koivu hoisting the Stanley Cup.

You've had that dream - I know you have!

In my dream, Koivu hands to the Cup to Kovalev first.

For me, that is where the dream begins to envision more than just one Cup!

In case any readers here have missed it, Kovalev recently appeared on "Tous Le Monde En Parle". This is fun, precious, and insightful stuff....and Kovalev answers french questions in english. I posted 4 You Tube clips - bet you can't watch just one!