Share All sharing options for: Max Pacioretty On Everyone's Lips 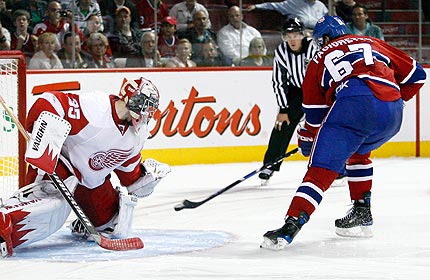 The name of 19 year old Montreal Canadiens rookie Max Pacioretty will be pronounced often between today and the beginning of the Canadiens 100th regular season on October 10.

Pacioretty announced himself in a big way last night, scoring the game's opening goal early in the second period, and notching a second goal to knot the shootout session on the way to the Habs 3-2 win over the Detroit Red Wings.

The New Canaan, Connecticut native did so with a panache and style , and was named the game's first star for his effort.

Both Pacioretty goals came on backhands. If Wings legend Gordie Howe, a great empoyer of the back side shot, happened to be watching from Detroit, his thoughts likely echoed those of 21,000 plus fans at the Bell Centre in thinking that "this kid's got game!"

In post game interviews, Pacioretty showed both humility and glee in an assessment of his nights work.

First claiming that he felt he'd played no better than he had so in previous exhibitions, he explained his goals were the benefit of some good luck combined with his linemates solid work. He stated that he felt no particular additional nervousness when asked to be the games first shootout contestant.

In assessing his evening, the young budding star noted that he felt turnovers were still a concern that needing working on.

Being named the games first star capped a dream night coming out party of sorts for the kid, whose father learned of inclusion in the lineup at morning, and drove seven hours from Connecticut to take it in.

Pacioretty's quick rise in the scheme of Habs hopefuls presents the type of dilema every hockey GM wishes to have. The Canadiens, with a lineup practically set in stone, have little room for Pacioretty unless they clear space.

The easy solution would simply be to send the player to Hamilton while letting injuries open the door for him. The problem is that the youngster is ready to play and contribute now, in possibly bigger dividends than current spares the team will carry. 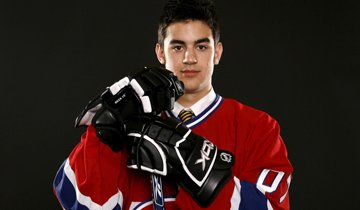 Fans and talkshows in Montreal will be lit with discussions of how Canadiens manager Bob Gainey will proceed on this. Expect names such as Mathieu Dandenault, Steve Begin, Tom Kostopoulos, and even 21 year old Guillaume Latendresse to heat up debates.

It is doubtfull that Gainey bails on Latendresse, a third year player whose upside is still to be determined. Those understanding Gainey's method of decision would be stunned to see him part with future assets in light of 10 looming free agents come the 2009-10 season.

In many eyes, the Pacioretty scenario reminds some of a similar excitement over the rushed assessment of Latendresse three seasons ago. The players attributes have common traits, but Latendresse graduated to a weaker club three seasons prior. 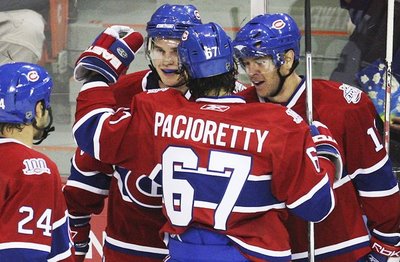 Should there be an odd man out at forward, it could be Kostopoulos. Not as rugged as Begin, and with less tenure on the club than he or Dandenault, Kostopoulos still has an interesting enough upside to attract a suitor.

Anyone watching how Gainey operates, will see three possible scenarios for making room for Pacioretty.

The first would be the trading Kostopoulos. The second is sending Dandenault down to the minors. The third would involve Pacioretty's patience in Hamilton, while waiting for doors to open.

With respect to veteran Dandenault, Gainey would treat him very professionally and perhaps allow him a say into his own destiny. Gainey is that way with those who rumble not in hard times. 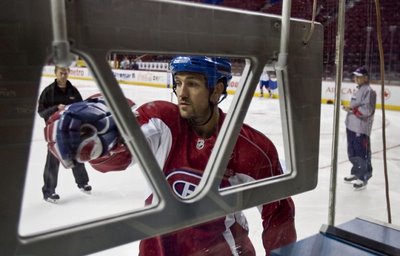 With respect to veteran Dandenault, Gainey would treat him very professionally and perhaps allow him a say into his own destiny. Gainey is that way with those who rumble not in hard times.

The question will be put to Dandenault whether he wants to remain on the big club in a spare part capacity, play in Hamilton, or be put on waivers.

Dandenault will likely choose a role where he gets to play and be seen, as he is without a contract beyond this season. Gainey will let him address the option while painting a very realistic picture of what awaits him this season in Montreal.

Dandenault has been with the club several seasons, and has a Stanley Cup ring and experience to pass along.

Kostopoulos, for his worthiness and dedication is a consumate pro, but yets a bubble player on this rising club. He has some worth for Gainey in a transaction that Dandenault does not. As he has been with the club but one season, my gut tells me he's the odd man out.

Amazing save by Carey Price