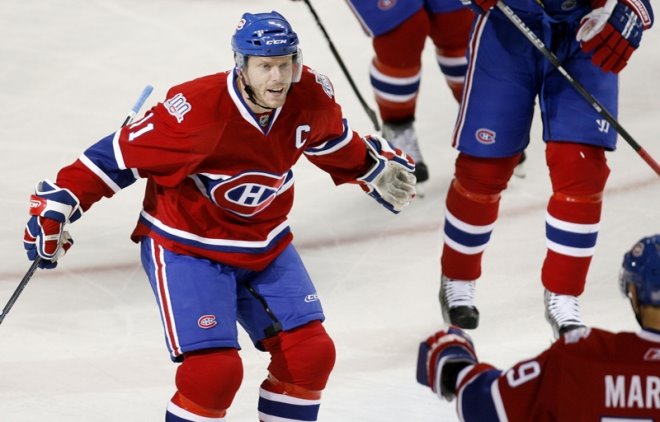 Five games into the 2008-09 season, the Canadiens leading scorer, with 2 goals and 6 assists, is none other than captain Saku Koivu.

Raise you hands, and grab your deodorant, those who saw this coming!

"Why is Koivu off to such a good start?", you might ask.

As the Canadiens prepared to face the upcoming season, there was much talk that acquisition of a third offensive centerman to complement Koivu and Tomas Plekanec was just what the Habs needed going forward.

After Canadiens GM Bob Gainey realized that Mats Sundin's mind was somewhere between Waldo and Jimmy Hoffa, he settled on bringing in Blackhawks pivot Robert Lang as a plan B.

What the acquisition of Lang has produced so far, is pretty much the same scenario that was envisioned in targeting the bald headed meatball of indecision. Lang has given the Canadiens three well structured offensive trios.

So far in this new season, Montreal has hit the net 20 times in just five games. Lang with three goals, matched by Gainey's other summer steal in the name of Alex Tanguay - also with three - have accounted for close to one third of the club's total goal production.

It could get even better than this.

The theories of a trickle down effect from having a well balanced offensive game have so far proven true. Consider that injured forward Chris Higgins - the team's third leading goal scorer from last season - has yet to make an appearance, and that the perceived top line of Plekanec, Alex Kovalev, and Andrei Kostitsyn has yet to get untracked. 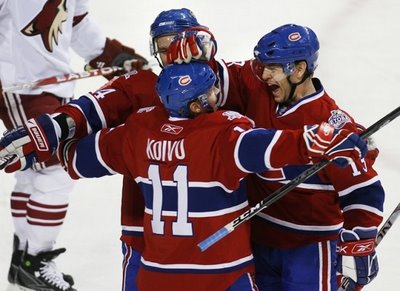 At the moment though, it seems that captain Koivu has so far been the most beneficial contributor to this new offensive scheme. While no one likely saw such prowess returning to Koivu's game, it is interesting to examine the reasons why it is happening. It is also imporatnt to note that there a very good reasons why it ought to continue.

Put me down as one who believes the soon to be 34 year old Koivu just might just have a career season in 2008-09.

The most obvious explanantion would be that the acquisition of Tanguay, who seems to have gelled nicely with Koivu, has expanded what Koivu is capable of doing as a linemate. Tanguay's quickness and vision enable Koivu to be less of a one dimensional player. As a member of a line in possession of the puck more often, rather than continuously battling for it, Koivu is freed both creatively and energetically to offer a different set of skills to his line.

Over the past few seasons, Koivu has been saddled and shackled with both seconding Higgins in working the corners and providing the one dimensional Michael Ryder with scoring chances. At present, he is actually working less and accomplishing more offensively.

As a centerman, what Koivu is capable of, has often gone underappreciated. Over the years, it was generally a given that he overworked himself and tired easily. In approching this season, in adding Lang, it was assumed that Koivu's load would be lightened, and that is how the changes have so far unfolded.

While Tanguay has been all that was expected and more, the emergence of Guillaume Latendresse on the trio has helped the line gel even quicker. 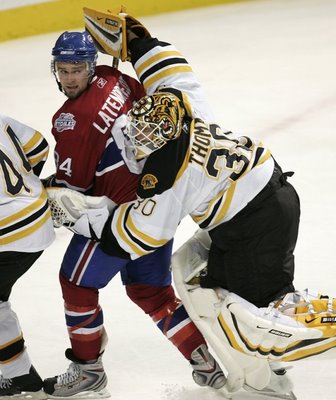 I've watched Latendresse studiously for two seasons, and often proclaimed at this site that he has all the tools - size, shot, intelligence, and dedication - to become a solid NHL forward. His biggest deterrents over two campaigns have been his skating, his hesitancies, and his linemates. Despite all of what I felt where holding him back, Latendresse managed a pair of 16 goal seasons, which to me, was all that was needed to understand that better times would come with increased possibilities.

That time is now at hand for Latendresse, and is making the most of it, and turning disbelieving naysayers into word chewing converts.

I've noticed a pair of skills from Latendresse of late, that I only ever caught in inconsistant glimpses previously. Firstly, he's becoming increasingly difficult to budge from the puck along the boards and in corners. He has started by heading there with the threat, promise, and delivery of a crunching hit, and is making it a habit of emerging with the puck on his stick.

More importantly, he has gained the required confidence to manage his puck time rather quickly and efficiently, and is revealing himself to be a rather smooth setup man. Everything saw the perfectly feathered pass to a charging Roman Hamrlik against Toronto and likely assumed it was an aberration of sorts, but Latendresse has been slipping all kinds of passes to his linemates that have been turning into scoring chances of late.

Against the Coyotes last night, Latendresse stunned me with a pair of moves that led to goals by Tanguay and Koivu. Both plays featured him skating backwards while passing the puck off. He was not credited with an assist on the second. Clearly, playing with top line players has brought about a different perception of Latendresse's game skills, even from a believer's point of view.

While Tanguay and Latendresse may be clicking with Koivu early on in this season, it should be pointed out that more often than not their timing isn't yet up to mid season standards. Fanned shots, missed passes, and overall cohesiveness still aren't yet in synch.

Imagine, that as time passes and communication improves, the trio should only get better. 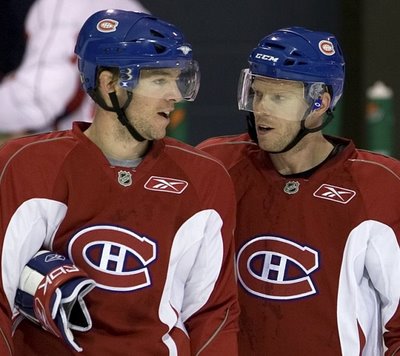 Older Habs fans might recall Koivu being in a similar scenario before. Going back to the 1996-97 season, in Koivu's sophomore year, he was also one of three offensively gifted centres, and he started the season on fire.

Koivu at that time, was seen as the club's third center, behind Vincent Damphousse and Pierre Turgeon, who each were coming off ninety plus point seasons. Damphousse was the center best matched against other teams top lines due to his two way hockey senses. Turgeon, at the time, was becoming increasingly pointed out in Montreal for his defensive liabilities.

Koivu, meanwhile, slipped through this scrutiny and was battling for first place in the NHL scoring race.

Nine games into the season, Turgeon was so humilated at being retrogated to third line center, he went bawling into Rejean Houle office demanding a trade. He was captain at the time, a choice rubber stamped and steamrolled by Habs president Ronald Corey.

Had Houle had the backbone of an experienced GM he would have advised Turgeon to grow some balls and battle for his stature on the club, but instead he buckled, and dealt the infamous "Tin Man" to the St. Louis Blues for Shayne Corson and spare parts. It was like like the Patrick Roy fiasco's second domino.

Turgeon, for the record, played his final game in a Habs uni on Koivu's left wing. He notched four assists.

Shortly thereafter, Koivu was injured in a knee on knee hit in a game against Chicago. The Habs went from having three productive centerman, to having just Damphousse in his prime. Hell beckoned!

When Koivu returned, the scenario was quite different. Much could be said about the next decade of Koivu's time in Montreal, but the tale is an exhausting, detailed, and fruitlerss one.

Suffice to say that this current edition of the Canadiens is the best team that Koivu has been a part of since the first 20 games of the 1996-97 campaign. We might now get to see what may have occurred had he not been injured after one of the club's top centerman was traded off.

The Finnish player deemed finished by many, might just finally fullfill his potential.

Now wouldn't that be a gas!


Photos courtesy of the Montreal Gazette and Habs Inside Out.