Is Trevor Timmins On Gainey's Radar Next?

Share All sharing options for: Is Trevor Timmins On Gainey's Radar Next? 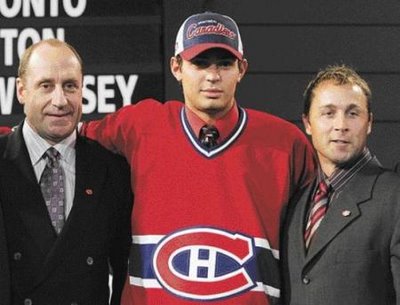 Robert L Note: In light of news today that Canadiens GM Bob Gainey has re-upped Guy Carbonneau for three seasons, I thought I'd dig up this relevant older piece from this past January 16 and post it once more. Now that Gainey has Carbo bagged, he should move on to Trevor Timmins, and cell block him the Habs camp for the remainder of his days above ground. This post was originally inspired through a chat with an 83 year old friend of mine, who is currently recovering from a triple bypass surgery in Ottawa. Mac is quite a loquatious octagenarian who reads on the net constantly. His son had a habit of e-mailing my post links to him last season. I hope this one finds him once again.

"Get well soon, my friend I miss you big time!"

At my usual coffee stop on Saturday morning, before last weekend's Rangers debacle, I was sitting around enjoying the paper when my old pal Mac came to interupt my reading and inadvertantly title this piece.

Mac's a Habs fan from way, way back. He remembers getting his shorts in a knot over the Canadiens bumping out Frank Selke to bring in Sam Pollock!

He walked in leaning on a cane and it was the first time I'd seen him this way. His walk has gained rust, but the mind is still as pointed as a spear.

As he watched me fold the last page of the sports section and close the paper, he exclaimed, "Whoa a second, flip that back one!"

News of Alexander Ovechkin signing his whopping 13 year deal caught Mac's eye, and he immersed himself in the storyline.

"Could turn out to be worth it", I add, "Ovechkin is the real deal, a great package of passion, personality and gamesmenship."

Mac made a good point. Injuries can hamper and cut short a brilliant career with just one hit to a knee or head.

"Not sure these long term deals are worth the risk", Mac summises, and to a certain extent, it's hard not to disagree.

I tell him that I believe the Canadiens should ink a few dandies of their own long term. I name Higgins, Komisarek, and Plekanec for starters, and Mac agrees but takes the thought and runs with it.

"That's the guy I think, that's a name I heard before. Is he the main scout?"

"Kinda, he's the director of scouting for the team. He likely takes in every game of every player that comes highly recommended by his staff of scouts", I offer.

"Yeah, that's the guy should get a deal like Ovechkin. If he's behind bringing all these young kids in, and ya wanna keep 'em comin' then he's the guy ya gotta keep!"

Mac is 82 years old. His cane is covered in Habs logo stickers.

"Betcha I could hit top corner with this thing", he brags, "Takes out Leafs fan with just one swing!"

Mac and I talked a bit more about hockey - he rarely misses games. Then we talked a whole lot about golf - to my regret!

The old guy makes a great point though, and one I hadn't really looked at in that way before. I starting thinking on the logic of signing a director of scouting long term, and it makes tons of sense in many regards.

First there are considerations of better offers coming Timmins' way. When success is proven, alluring offers follow, and locking up Timmins as New Jersey has done with David Conte assures continuity of thought and process in an organization. With the Devils, Conte swears allegiance to Lou Lamoriello, and I'd be curious to know the details of the scouting directors contract and whether it outruns the manager's deal.

I know that Gainey's contract in Montreal expires in a few seasons. My thinking is both Gainey and the Habs will want the deal extended, but should Gainey decide he is fullfilled, and Timmins contract expires with him, what prevents him from being yanked away in a moment of indecision by an incoming GM? 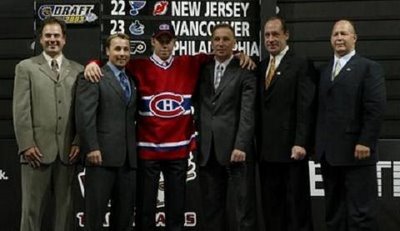 As scouts results are often teamed with a GM whose talents enable those skills, scouting staffs often suffer the same fate as coaching staffs when new hands take over.

Another reason to want Timmins virtues around for another decade is that while scouts tend to shuffle from team to team, the directors remain in place longer. They get aquainted with the blossoming of talent in an organization. They speak to it, groom it, and help to guide it along. In all the overseeing duties tied to the task, no one in the organization has a better grip on where every kid is at mentally, physically, and hockey wise. Timmins knows what makes these guys tick better than anyone as he has gotten to know many of them as early as when they were perhaps 16 years old. Losing such an asset would be a killer to the Habs, as there is likely no one set to take over at any given time who has their pulse so finely tuned on the aspirations of the team as Timmins does.

The first two reasons add up to the third, and have to do with the perception of stability from both both within the organization and outside of it. It ties into everything that makes the Canadiens run, from free agent signings, to contract renewals, through player trades, and stretching as far as the players drafted themselves and the scouts who scout them.

Stability and its perception can affect free agents who are thinking about the solidity of the future when prospectively signing in Montreal.

A player facing free agency will be comforted when thinking that the team will remain strong, thanks to a stable of picks overseen by Timmins filling out the team for years.

When another GM calls up Gainey inquiring about a pick manned by Timmins, they might be reassured by his track record, and go the extra length in aquiring the player - which benefits the Habs.

Players drafted by Timmins and the Canadiens are beginning to understand that the team will have them under a watchful and concerned eye as they grow. They will listen more intently to directives knowing this and will go all out to prove themselves knowing that their progression is noticed and justifiably rewarded.

As for Timmins background, one just needs to know that he has had a helping hand in building up the Ottawa Senators, from whom he was plucked away. The Senators repetoire of prospects has hardly been the equal of the Canadiens since. In Ottawa, Timmins worked his way up the ladder into scouting, and the degrees he earned prior remain with him.

He is most definitely a man who rises to the task of challenges. With his accumulated successes, he could easily work outside of hockey, as delegating authority and cultivating particular assests are surely among his talents as well.

Keep your fingers crossed that both Bob Gainey and Pierre Boivin know all this and realize what is at stake.

As Selke once had to make way for Pollock, perhaps Gainey will one day step aside to make room for Timmins. My old friend will hopefully still be around them and I doubt he'll be as upset now as he was then.

Mac, your genial. Next cup is on me!

Perhaps the best bio on Timmins comes from this Gazette article by Pat Hickey, dating back to June 13, 2007.