Share All sharing options for: Habs Match Up Well Against Blueprint Wings 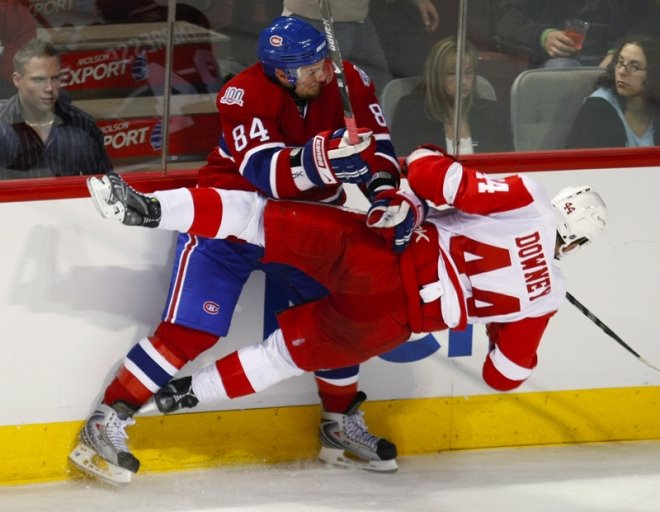 It's no mystery that the Canadiens template for success is the Detroit Red Wings.

It is also no accidental coincidence that the Canadiens are playing the Winged Wheel for a second time in this exhibition schedule.

You could even go so far as to assume that both clubs were wishing to measure themselves against each other before the season is underway.

My guess would even go so far as to suggest these two strong and skilled opponents will also end the season playing each other.

There are an abundance of similarities between the teams and how their organizations are run.

Both clubs are owned by men with a vested interest in how the teams do. Mike Illitch and George Gillett both care tremendously about their teams and each desperately want to win. They entrusted the run of their clubs to similar men, who each are not afraid to assume the helm and guide it by surrounding themselves with the most knowledgeable hockey people available.

Bob Gainey and Ken Holland are especially respected within their organizations for how things are set up and run. While each have a final say in all matters, a valuable committee of hockey brains are consulted on every decision.

The Wings and Habs front offices are filled by men with of varied backgrounds whose experiences in professional hockey span every crevice of the game.

It is one thing to suggest that persons within their ranks are respected, it's a whole deal when an organization proves it annually.

Each club has built it's on ice product from the ground up with intelligent drafting and astute signings of players without contracts, both inside the NHL scheme and from college and junior ranks.

Montreal and Detroit not only have drafted well, but they draft often. Their picks are not given away on whims. The talents of their scouts are utilized to the maximum, and therefore the better scouts seek to work for a team that will not only employ them, but make good use of their thinking. This in turns strengthens the club from top to bottom. 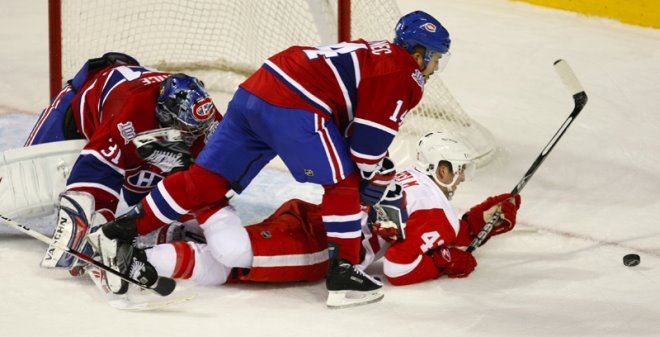 The coaching philosophies of each organization are also operated similarly. On their farm clubs, the teachings of the game in regards to the systems employed keep everyone on the same page. In Grand Rapids, the Griffins do things as the Wings do.

In Montreal, a common line of thinking is shared by Habs assistant Doug Jarvis, who has previous worked alongside Hamilton's Don Lever, the Bulldogs current bench boss. The Dogs GM is Gainey's right hand man in Montreal, Julien Brisebois. There are no crossed wires of communication within these organizations.

For their on ice product, both teams look for players of a certain character, and they go beyond their skill in looking for intangibles that will help determine their mental capabilities as NHLers.

One example in Montreal, was when the Canadiens were scouting winger Andrei Kostitsyn. There were concerns from many organizations regarding a series of epileptic seizures Kostitsyn had suffered while appearing with Belarus during the World Junior Championships. The condition (known as Frontal Lobe Epilepsy - Grey's Anatomy anyone?) had not been properly diagnosed, and was easily remedied by finding the proper medication.

The Canadiens were diligent in their assessment of Kostitsyn. During pre-draft screening tests and interviews, Kostitsyn boarded the bike for cardio and leg strength tests. The drill involves peddling like a getaway thief for ten minutes, and soon after beginning Kostitsyn suffered what appeared to be the start of an attack. He removed himself from the bike and settled himself down.

Within minutes, Kostitsyn was composed, and he climbed back and nailed some impressive results. The kid was no quitter, and the Canadiens were privileged to witness a test of character they didn't foresee in their testing. When other teams shied away from choosing the player ranked fifth in the draft, the Canadiens happily selected him. As a reward, familiarity with their pick, likely led to the Habs drafting his younger brother, who was buried under 29 other clubs radars.

The Red Wings and Canadiens have been ahead of the curve for a few seasons in regards to choosing players. It is evidenced in the fact that both clubs have become knows for making strong choices in the latter rounds. The Entry Draft will always be a form of crapshoot, but by scouting what a player eats for breakfast, how often he attends church, and what the ex-girlfriend thinks of him, a better gauge of a person's convictions comes forth.

Of course, other clubs do these things well also, but perhaps the Habs and Red Wings are more thorough because they have been understanding certain things longer.

On the ice, the team's final product mirrors each others in several ways. Both clubs employ speed as their biggest asset. While Detroit uses it's speed and passing skills to deploy a puck possession oriented offense, the Canadiens, slightly larger in size, use speed more in terms of puck pursuit.

The Detroit game is a more refined version of what the Canadiens might one day attempt to achieve. For now Montreal's speed comes into play mainly in puck and positional battles, drawing opponents into penalties that translate into power play goals.

Another strong facet of the Detroit style, is that Red Wings players are constantly placing the puck in zones where harm is least expected. They do this almost instinctively and as a team whose members have played together for a long period of time, they seem to always have the proper reaction to every puck battle. The Red Wings never stand still, and it benefits their possession style of feeding the puck into open ice and getting to it first. A flat footed opponents is a meal for the Wings.

The Canadiens battle similarly, but are in a younger phase of developing the same strategies. The Habs aren't yet as adept as the Wings in placing the puck carefully in their own end, but they are quite savvy at moving it out of the zone upon possession. With speed to burn, the Canadiens transition is often their strongest asset next to their power play. The Habs puck possession in transition in an element that time and familiarity will enhance.

Part of Detroit's defensive success lies in an ability to slow a game down by controlling the puck and keeping it from opponents for long stretches at a time. No opponent can build up speed playing without the puck, and their tempo is affected by the Wings control. Their knack for putting teams to sleep with this, and the shifting gears at a moments notice, has made them a tough team to size up on any given night. Detroit rarely alters their style to suit a different game flow, they simply control it by speeding up and slowing the tempo of the team they are facing. This is most evident when they take the lead in games.

The Canadiens are not yet dominant enough, or experienced enough to force one main system of play onto an equally strong opponent. The Habs methods of operation are a hybrid of different game facets that work against varying opponents. Depending on the game situation, or a particular line match-up, Montreal will deploy 2-1-2 or 1-2-2 schemes based almost on a feel for the tempo of the game. Traps and locks will be attempted against stronger lines to suit the need, just as dumps and chases will be deployed against tired or weaker opponents. 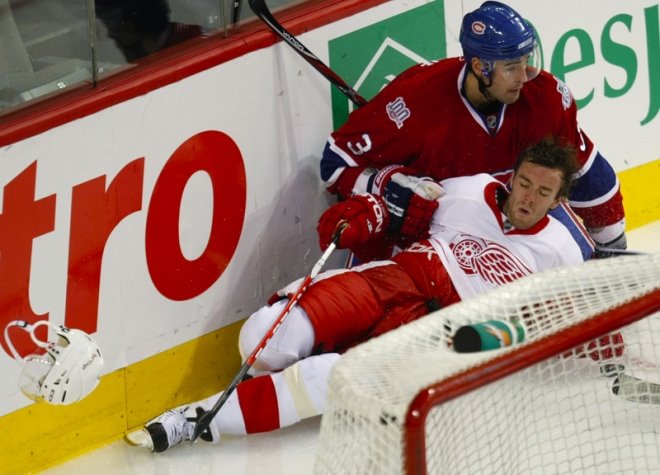 If there were a baseball analogy in all this, it would be found in a pitcher's bag of tricks.

Detroit has mastered the fastball and knuckleball, and keeps opponents off pace with it. The fastball is so good, it is practically unhittable. Should a hitter seem to be adjusting, a knuckler will then follow, if for no other reason than to make an opponents step back.

On the Canadiens, more pitches are used. The fastball is the first pitch of choice, but it can change and be mixed at a moments notice. By employing different schemes, the Habs are in essence throwing curves to keep a team off balance. A club without strong identity ingrained in their style of play is quickly chewed up in the guessing game.

What is extremely interesting in the analysis of both clubs, is that their construction is similar, but their deployments are opposed and designed to counter each other.

Perhaps the measure of the Canadiens success in progressing with these methods is best exemplified in games against the Pittsburgh Penguins over the last two seasons. 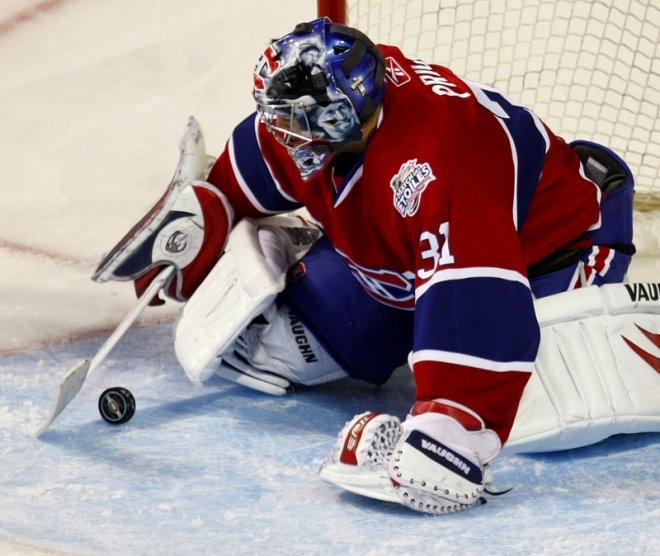 The Penguins game sits somewhere between that of Detroit and Montreal in that there are many similar elements again. In Pittsburgh, to suit their needs on a particular night, they will shut down almost completely offensively, and focus on causing mistakes their speed and power play can pounce on. Once a lead is in hand, they will shift right back to a shut down game.

In last year's final, the Red Wings, at two or three junctures, seemed to have their hands full with this. After the first two games of the series, it became evident that Pittsburgh would not beat Detroit at it's own game. With Detroit sensing the Cup, they opened up and made mistakes. The Penguins sat back in groups of three and four and took advantage of small errors to get back in the series.

Against the Penguins, the Canadiens have fared decently well over the past 8 meetings. No team has been able to impose superiority on the other, but Pittsburgh at times looked defensively dominant in out-waiting the Canadiens thrusts. You may recall a pair of games between the two clubs being billed as offensive fireworks displays only to result in something that looked like the Devils playing the Devils.

Should the Canadiens and Red Wings fatefully meet in June as many predict, it will be interesting to watch how they go about handling each other.

For now, a pair exhibition games with partial rosters, decided in shootouts, have produced no clear master.

As the Canadiens continue to explore their own experience, and demand a stronger commitment of themselves over the season's course, it will be curious to witness how these two clubs match at year's end.