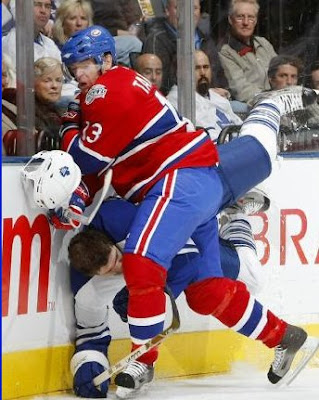 Take your pick: was last night's Canadiens dismantling of the Leafs more reminiscent of Thanksgiving, Christmas or April Fools?

I suggest Thanksgiving merely because the Leafs served up a turkey of a game to the Habs on a silver platter. Their indiscipline offered the Canadiens a feast.

Christmas, maybe? Toronto goalie Vesa Toskala sure looked to be in a giving mood, going so far as to gift wrap a third period debut for backup Curtis Joseph.

Perhaps it might best be a very early April Fool's joke. The Canadiens looked overpowering at times, but it is neccessary to ground oneself in excitement and consider the weakness of the opponant. While some might term this year's Leafs team a joke, 82 games will tell if the Canadiens have the last laughs. 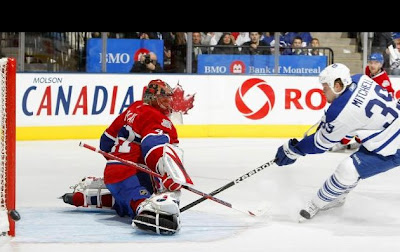 If truth be told, the 2007-08 Toronto Maple Leafs are not the foe that the Canadiens are best judged against.

The Leafs in fact, had some good moments in the game. Coming off a win against the Cup champion Red Wings to open the season, Toronto began the game with some semblance of confidence. Along the way, Toronto hit posts numerous times, were disallowed a goal, and were robbed by a stellar Jaroslav Halak more than once.

While Halak was the early difference in the game, the contest was settled when the Leafs indiscipline brought out the Habs killer instinct.

For Toronto, this one game might just play over like the Groundhog Day movie. Leafs coach Ron Wilson looked very Bill Murray-ish and befuddled behind the bench in this one. 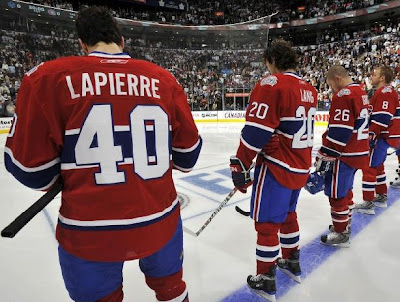 Several Canadiens players made the most of their evenings work, and in assessing the positives it is important to remember that things will not be this easy most nights.

A multi point night for the likes of Alex Tanguay, Sergei Kostitsyn, Saku Koivu, Guillaume Latendresse, and Andrei Markov, will be how most watchers recall this game, but while their performances were stellar under the circumstances, it must be pointed out that the Canadiens were simply not firing on all cylinders.

Perhaps a jittery opening night shootout loss to Buffalo was on the minds of several Canadiens players wishing to make amends against the Leafs. 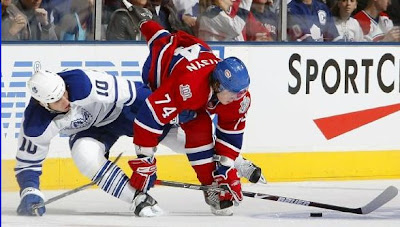 Midway through this game, the Canadiens led by five goals, and by that point, all focus on doing the simple things correctly was shot to hell. Looking to pad their stats, several Habs took the padal off the gas, became individualistic, or simply expected the Leafs to cave.

Montreal should have won this game by a 10-1 score.

Defensemen Markov and Mike Komisarek were not their usual selves. They seemed at times too keen to think transition before looking up ice and reading the defensive coverage.

Rhino Burn had an up and down game, but the second year player seems to be in a process of learning what he can and can't do in this league. When he gains possesion of the puck in an area of space, he seems to want to become Larry Robinson, but he might be best off sticking to remaining what Craig Ludwig once was - a stay at home bruiser.

Patrice Brisebois still makes me nervous. His propensity for firing shots into oncoming shinpads on the powerplay is a rookie mistake he should have corrected sixteen seasons ago. I'll buy the Brisebois experience argument once he wears a suit and tie behind a bench of a team with the lowest GAA in the league. In the interim, hell will freeze over and there will be peace in the Middle East. 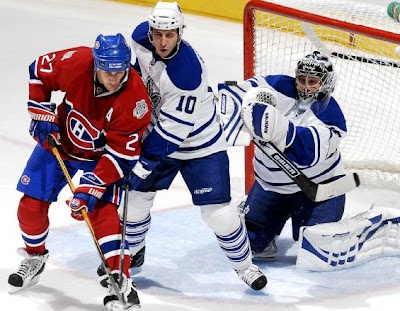 The Canadiens best blueliners last night were Roman Hammer Lick and Josh Gorges . Hammer had one bad shift on the penalty kill, but otherwise astutely read when to pinch and when to sit back with veteran perception. Gorges was faithfull to his perutation. All game long he took hits to make the proper plays and bounce back in Gumby like fashion, as he is becoming known to do.

Up front, the Canadiens forwards were a rabid bunch, but were often failed by their own blueliners zest. The multitude of broken plays and cutoff passes up ice, were hardly their blame, but after the game's outcome was settled, too many of them were frothing to participate in the rout. 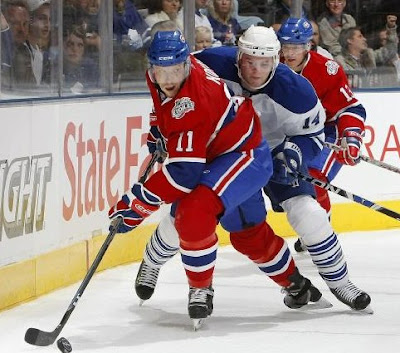 One forward who particularly stood out in this was Maxim Lapierre, who twice turned breakout two on one's into dead end saves by Joseph in the third period. Lang and Sergei K were also guilty of looking too hard for the cherry picker play in the final frame. 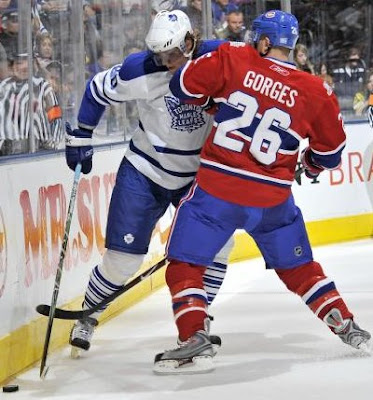 It is tempting to detail all the goodness that emerged from the line of Koivu - Latendresse - Tanguay, but the quality of the opponant keeps me in check here.

The Canadiens next rivals are the Flyers and Bruins. Once passed those tests, we will all have a much sounder assessment of where this season's edition of the Canadiens truly sits.

Until then, it was nice to participate in the Leafs recurring Groundhog Day nightmare. There is still much work to focus on, and the Habs would be best served not to use last night's illusion.

T.C. Denault's take on the game at the Canadiens Hockey News blog

Dennis Kane's viewpoint on the game. 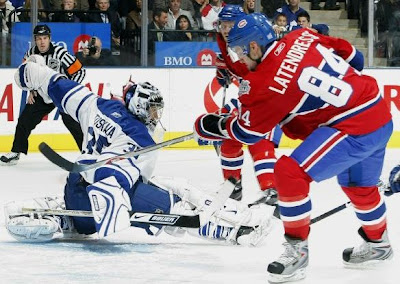 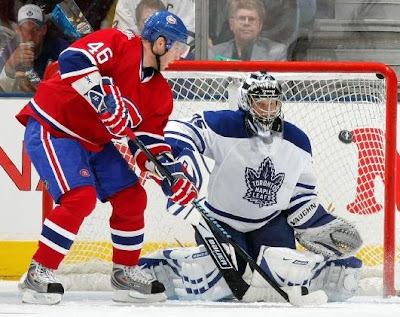