Share All sharing options for: Habs Begin New Season Looking For A Difference 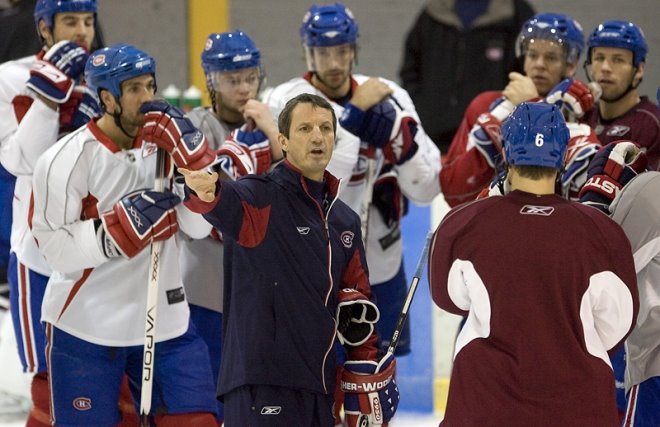 In 2007-08, the Montreal Canadiens were the surprise team of the NHL - by a longshot!

Such a surprise cannot happen a second year running, as teams will be better prepared to face the Canadiens this time around.

With such a notion in mind, the Canadiens were busy tinkering with their powerplay over the last few practice sessions, trying to remain a step ahead of the adjusting competition.

It might seem odd to some, that the Habs would be focusing on the one perceived part of their game that is unquestionably not broken. The old adage of "why fix it if it ain't broke" must have crossed many a hockey mind upon learning of this. I know that it did mine.

What the Canadiens have been doing, is moving elements of the powerplay unit around in order to find ways to adjust to opponants having figured out how to stiffle the Habs deadliest of weapons.

Assistant coach Doug Jarvis, a former defensive specialist who guides the club's powerplay, is not trying to reinvent the wheel, but merely seeking to keep it round and rolling.

During last season's playoffs, Boston and Philadelphia, due to a growing familiarity with what players such as Andrei Markov and Alex Kovalev bring do best, began to shut down their passing lanes and play both men much tighter.

The result was significant enough for the Canadiens to look into ways of adding new wrinkles to their power play game plan.

Should the idea of having Markov work the left point produce sparks, the opposition would then be faced with being not only concerned with which players are sent out to work the power play, but also which setup will be employed.

Over the past few seasons, the Habs PP has been one well greased gear. Teams were just about keened on ways to grind Sheldon Souray to a halt two seasons ago. Last year, Mark Streit's precision ably replaced Souray's blast and kept opponants guessing.

This time around, the Canadiens can explore the talents of Alex Tanguay and Sergei Kostitsyn in different setups, or utilize Guillaume Latendresse on the crease's edge in a Tomas Holmstrom manner, to keep teams on their toes.

Over the past seasons of power play success, the Canadiens were known for hardly practicing that aspect of their game at all. With the successive departures of Souray and Streit, what makes the unit tick has inevitably been broken down for the opposition to see. Hence the idea of throwing them some curves to keep them dazed and confused.

Whatever the method or solution, the importance is in keeping options open and keeping ideas from becoming stagnant. 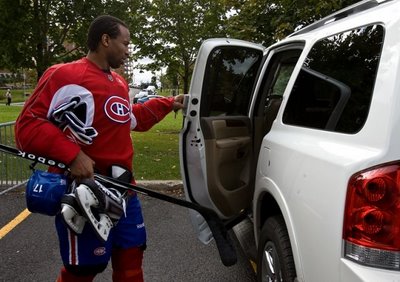 As I thought of all the possibilities the Canadiens could employ in new powerplay alignments, it brought to mind some interesting observations about the team, it's coaching staff, and overall goals.

When last season began, the goal was to win as many games possible and hopefully not have to wait until the final date of the season to clinch a playoff berth. Along the way, that goal changed, and when the Canadiens won the Eastern Conference, sights were set on the Stanley Cup.

This season, or more precisely - this off season - the goal was squarely to win a 25th Cup.

The combined acquisitions of Georges Laraque, Alex Tanguay, and Robert Lang received a rare round of raves from a normally critical fanbase.

The result - for the first time in ages, the Canadiens begin a season as a legitimate Stanley Cup contender. 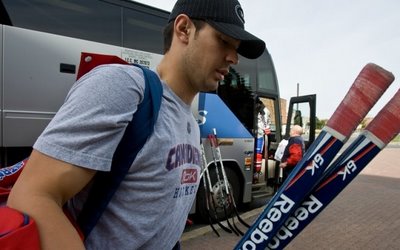 Refreshingly, it is not only the self contained rabid fanbase and media that thinks so. Publications outside of CH central, in print and online, as well as a recent GM's poll, all figure the Habs to be thick in the mix.

A quote from Canadiens coach Guy Carbonneau this week, stating that there were no more strictly defensive lines on the club was a definite eyebrow raiser. It was quite in contrast to a quote Guy Lafleur ate and regurgitated early last season, having to do with the team being nothing more than four fourth lines.

What it all adds up to - these new angles and perceptions - is that the Canadiens are not willing to play the part of predictable foes.

As teams are surely now gunning for what they believe is a sized up opponant, the Habs are now talented and deep enough to explore their own possibilities while others watch and wonder. 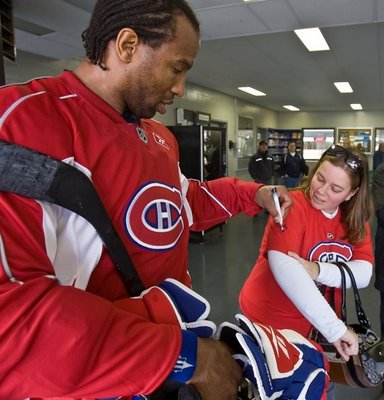 Some changes the Canadiens make along the way are sure to frustrate even the fans who have them pegged, but it's all the Habs should do with a lineup that has had little variation over a season.

The cards are the same, but the order in which they are played will be shuffled periodically. In a deck loaded with aces, the odd joker up the sleeve keeps opponants off balance.

Tonight in Buffalo, we will begin to be refamiliarized with this hockey club. Initial stutters and slips will make us fans nervous. New experiments will cause perspiration temporarily. Newness will await the comfort of a win streak to settle us all in.

After a month of training camp reports, great rookie showings, cuts and more cuts, a groin pull or seven, and a dizzying array of new line combinations, there was one quote from coach Carbonneau that summed up the hunger of the entire organization for me.

When asked to qualify the performance of many an impressive rookie along the training camp way, Carbonneau responded that it was the play of the veterans, who arrived focused and driven, that made the hopefuls look as though they belonged.

This season, from all appearances, the Canadiens are approaching it with an edge.

That might be all the difference between a team that wins a regular season conference title, and one whose gaze is focused squarely on a big silver mug.

Photos of Montreall Canadiens in practice courtesy of Habs Inside Out and the Montreal Gazette.