Share All sharing options for: Yannick Weber: Swiss Cheese Without The Holes 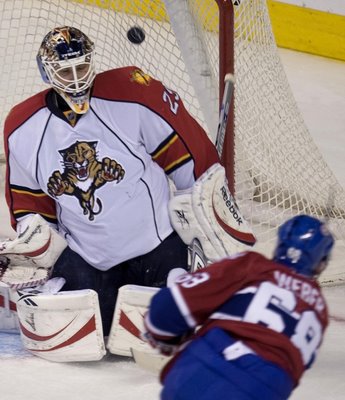 One of the most surprising revelations of the 2008 Montreal Canadiens training camp has been the play of Swiss born Yannick Weber.

Weber might best be known as the Kitchener Rangers star pointman over the past couple of seasons. He might also be known to those in the hockey coulisses as the captain of the Switzerland entry in the last World Junior Championship tournament.

Current Florida Panthers coach Peter DeBoer, and former Rangers bench boss calls Weber the best OHL defenseman of the past season. For the record, that statement by DeBoer was made prior to Weber scoring the tying goal against DeBoer's Panthers last evening.

Had Weber not been recovering from injuries at the time, he might have led the heavily favored Kitchener squad to a Memorial Cup championship. Heck, with a little break, he might have been the lucky candidate fortunate enough to snap the Memorial Cup in two.

All told, Weber had a great say in why the Kitchener boys were heavily favored in the first place.

The Montreal Canadiens have both a recent and long standing affiliation with Swiss born players. Howie Morenz and Aurel Joliat, a duo who saw to it that the Canadiens would snag Stanley Cups in 1924, 1930, and 1931, were one generation removed from Swiss born parents.

And all along you guessed they were "Flying Frenchmen"! 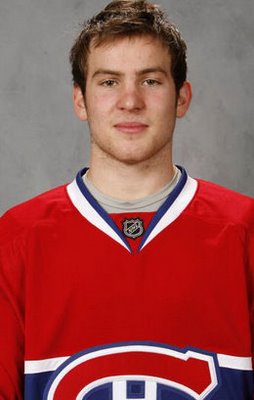 More recent Swiss affiliations to Habs lore have included goalie David "I've got the pin, where's the grenade?" Aebischer and defenseman Mark Streit. While you surely don't want to recall Aebischer fondly from two seasons ago, the man who was a keg of gunpowder to the Habs goaltending woes then, now stops pucks somewhere in the hockey ozone.

Mark Streit on the other hand, was pure gold for the Habs. In three seasons with the club, Streit's role expanded from seldom used defender, to utility wingman, and finally to PP QB last season. His stats were testosterone induced by contributions from the likes of Alex Kovalev and Andrei Markov.

Streit, after his career year of close to 70 points, then became as cursed as he was blessed. In free agency, he became a New York Islander, a reward akin to kissing Megan Fox and waking up next to Bea Arthur. 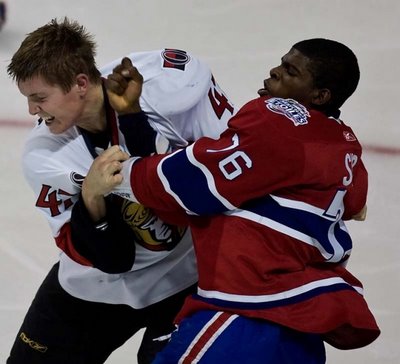 Weber in all this, if often compared to Streit, but the deal doesn't hold water. Weber is and will be a much sounder player.

Purely, the comaprison is nothing but a Swiss thing. Weber's shot is more accurate, he plays sounder defense, his size doesn't seem to be a liability, and he doesn't have that chickenshit scared french painter look about him that Streit had.

Four exhibition games into an NHL lifetime of course, does not make a career, but by all reports, Weber has positioned himself within these contests as the next Canadiens defenseman to make the bigs. He'd be positioned at number seven on the Canadiens depth chart were it not for human gasket Patrice Brisebois serving once again as placeholder and stunter of development for the likes of Weber and P.K. Subban.

What bodes well for the Canadiens, is that the case of an extreme emergency - a long term injury to a defender - Weber is ready to move up and assume the role.