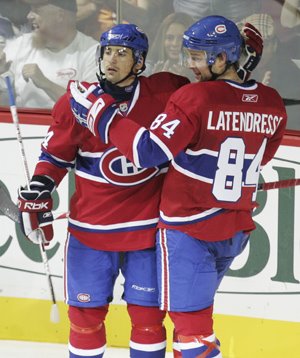 Last week at this site, I had an overwhelming reponse to a piece entitled "Adjusting Latendresse". The pro Gui rant hammered out in frustration to his naysayers received the largest one day traffic hit this site has seen since it's inception.

What I enjoyed most though, were the many returning positive comments from readers who "got it". The piece also made its way to several message boards where, and the response there wasn't the usual snarly remarks either.

Makes me hope that the kid turns some heads this season, and has a strong campaign.

If his first few days at camp are any indication, he's grooved into the right track.

It has all to do with the package between his ears.

The kid is grounded and has a great understanding of his environment. He gets it, that he is under a spotlight on a constant basis in Montreal, and despite whatever one's misgivings about him as a player, he works very hard on different aspects of his game.

In the media scrum that is Montreal, it is tough for players to give special attention to fans, but I have read it on more than one occasion that when Lats is on the road, and sees fans wearing his jersey, he makes a beeline for them as soon as he's able. That's called class, folks.

There has been much written about the effort Guillaume has put in this summer to improve his skating. He's trained hard over the past couple of months in order to show up for camp in the best shape possible, and by all accounts the sweat has been worth it. Working out with skating specialist Paul Lawson, the big winger has not only impressed so far, he has in fact floored team mates at observers with great showing in tested drills. Teammate Francis Bouillon stated yesterday that Latendresse finished near the top, after being one of the slower (okay, slowest!) Habs last season.

On Guillaume's mind yesterday, was a thought offered to one journalist: "Wouldn't it be wonderful to play my whole career in Montreal?"

EXCITED TO BE A MONTREAL CANADIEN MUCH!

Speaking strictly for myself, the tone of this traing camp was set the moment I read that newcomer Robert Lang, upon being traded to the Canadiens a week ago Friday, hopped in his car, equipement packed in the trunk, and drove 12 hours from Chicago to Montreal. 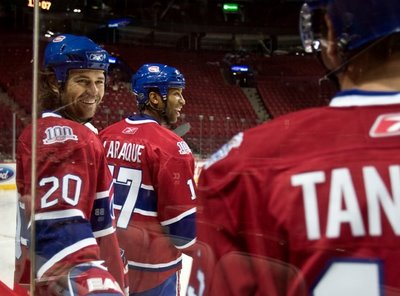 Once in town, Lang seemed to enjoy having 57 microphones thrust in his face, and his first juicy quote came when the name of the forever indecisive Mats Sundin was dropped.

It must be said that Lang's refreshing attitude and enthusiasm are a 180 degree, diametrically opposite reponse to the slow to get it Swede.

I admit, I wasn't too sold on Lang at first, but now I am quite pumped to see this guy play.

Players bristling with anticipation is contagious. I've rarely seen such a fever pitch for a training camp.

This Habs Inside Out clip does not contain the quote in question, but Lang is clearly juiced about the hold Habs fans have on their team.


Untitled from Habsinsideout on Vimeo.

KOMISAREK THE NEXT CAPTAIN?

RDS is reporting that the Canadiens training camp guide cover might just a peek into the future. Featured on the front page are three captains - two former and one current, namely Jean Beliveau, Serge Savard and Saku Koivu. At the top of the page sits a photo of Mike Komisarek, a not so subtle hint perhaps.

No word yet that Komisarek, an American of Polish descent, is enrolled in french classes at McGill.

It seems that the Canadien off season orders from trainer Scott Livingstone have been followed and are paying great dividends. Alex Kovalev has dropped a dozen pounds in an effort to keep up with young guns. Kovy says that the Russians felt that his speed and quickness again, were not up to par. 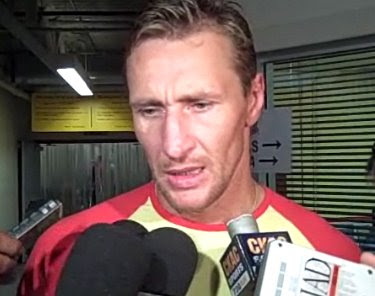 I like the idea of the Russian team pissing Kovalev off at the end of every season. If this latest slag motivates him as much as it did last season, we're all in for a treat. If AK27 had his way, the season would start today.

Good news, bad news was the revelation that Carey Price was overweight last season, and not by a little either. Having dropped close to 20 pounds for this camp, the notion gives much credence to reports he was pooped in last seasons playoffs.

THE PIPELINE OF PROSPECTS NEVER ENDS

I had to crack a big smile this morning, when I ventured over to Habs blogger Dennis Kane's site. Kane is one of the few good guy Habs fans online who is older than I, and his off beat tales of all things Canadiens never fail to both educate and enlighten me daily.

His latest post, is a preview of the Habs draft choices for 2027! Check it out.

Dennis lives on the west coast, a true Habs fan who never lost his roots. When I think of how much the Canadiens are loved across this country, I think of Dennis as proof posive the Habs are this country's team, from sea to sea. 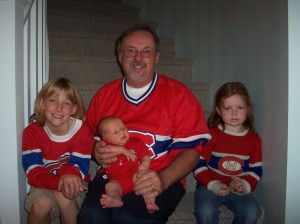 Perhaps the best notion that we fans are about to go on one sweat ride this season, is Canadiens captain Koivu's uncharacteristic and unbridled assessment of the team this season. 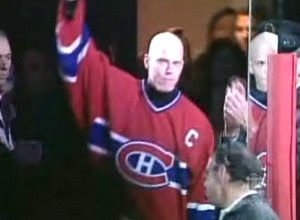 In an interview posted at TSN yesterday, Koivu spoke about what it feels like this time around in Montreal, as opposed to previous seasons.

''When I first came here, my first two years, we had a pretty good team on paper and on the ice,'' he said. ''But this one, I think, has more youth, has more potential, and I think it's better. This is the best team in a long, long time that I think the Montreal Canadiens have had.''

I don't know about you, but my life will never be complete without seeing this gutsy warrior hoist that big silver Stanley over his head.

Feeling it could be coming this year is bliss!