What The Habs Training Camp Is, Means, And Does

Share All sharing options for: What The Habs Training Camp Is, Means, And Does 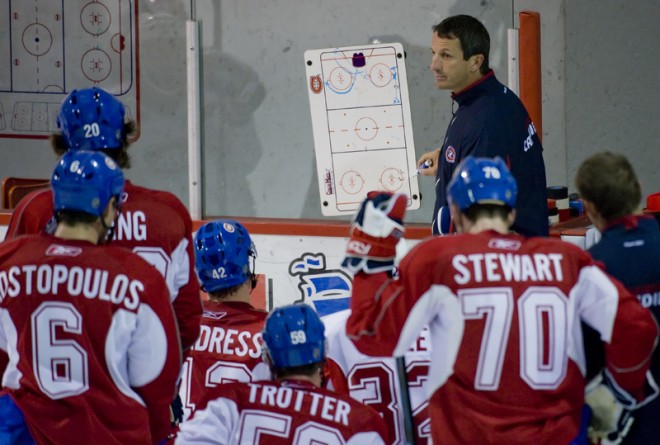 The Canadiens and Sabres tilt in Roberval is a few hours away, and I've got mathematics and possibility on the brain.....

So I'm trying to figure this out.

An abundant 52 players in the Canadiens camp.

Almost as many one way NHL contracts.

I laughed when one take I read said, "All this time to find out if Kyle Chipchura will make the team."

Chipchura won't. He needs to play. Cut to the chase, already!

So just exactly what is this Canadiens training camp supposed to accomplish in terms of final roster and pre-season preparation.

If I'm the coach, I start with about 30 hopefuls, and give the additional 7 or 8 players a good four games to strut their stuff.

The other 22 young studs time's will come. Show me what you got in Hamilton, where I believe it is a more important priority for them to gel as a unit ASAP, rather than getting a look-see of how they fare against the pros and other NHL hopefuls in preseason. 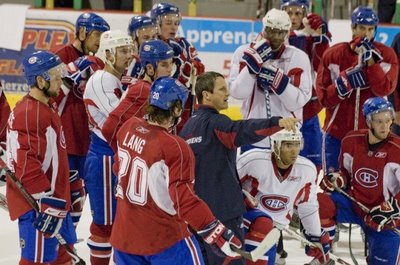 Perhaps that's why I don't run the team.

But the Canadiens tend to approach matters differently. They want to see exactly what these guys have got in the tank. There are many ways to measure the skills and gamesmenship of prospects, but this is perhaps the one opportunity when they can be given the chance to show what they can do against established NHL'ers.

So we get to find out how Marc Denis deals with playing behind a dyslexic defense unaware they are screening him.

We get to know that Mathieu Aubin has trouble deking Zdeno Chara.

We may learn a few more useful bits of information from tonight's game against the Sabres.

For myself, there are three main curiosities this camp.

How close is Pavel Valentenko to making the team.

Is there a goalie we could call up in a pinch should Carey Price get hurt.

How ready is Max Pacioretty, in that beautiful number 67 I hope he keeps, for no other reason than I want it on the ice when the Habs play the Leafs.

Training camp is no longer about getting in shape. Unless you are Kyle Wellwood and have turned into Fat Balloon. Players today show up in shape.

Today's camps are about synchronicity and environment.

The synch is for the vets, the atmosphere for the kids. 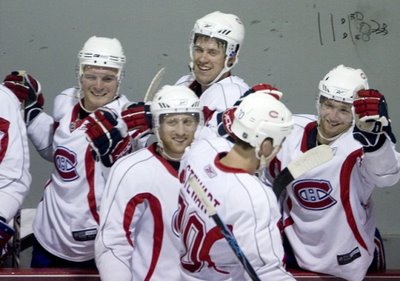 Manager Gainey, prior to camp alluded to the lack of open roster spots for rookies as compared to previous seasons. He spoke honestly that the quality of ready players knocking at the door aren't quite as plentiful as last season and those before it.

In saying such, Gainey also projected to next season and its camp, and stated that many would again be at the door then.

Maybe the notion of having the abundance of players this time, is a nod to getting them prepared for next camp, in terms of best assessing what needs to be accomplished on an individual basis for players over the next 12 months.

That, to me, makes sense. It's not so much about players making the team. It's about where these players stand in rank.

The 52 players in camp proposition does have it's props after all.

Still I wish I could have seen the most serious greenhorns trimmed down to a half dozen, surrounded by vets.

It would make all our assessments more serene, for now.