Share All sharing options for: Towels Set To Swirl For Habs Hopes 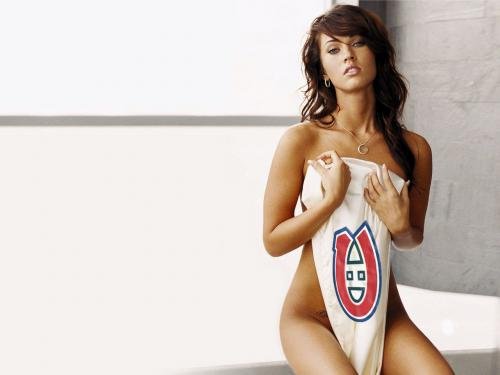 Alex Kovalev says "Anything is possible!"

Captain Saku Koivu calls this edition of the Canadiens the best since he joined the club as a rookie in 1995.

Optimism at this year's Canadiens camp isn't hard to spot.

It seems it is on the smiles and in the words of everyone, everywhere one looks.
Over a summer consumed with waiting for Mats Sundin to decide if he wanted croutons on his tossed salad, it seems that Canadiens fans were trapped in a forward time warp between anxiety and disbelief.

That all washed over the moment Bob Gainey pulled the trigger on the eve of camp, and brought in a smiling and delighted to be here Robert Lang.

Those not immediately convinced about Lang's attributes - like myself - were quickly swayed upon hearing that the well travelled vet sprung to life, threw his sticks and pads in the trunk, and high tailed it from Chicago to Montreal faster than you can Savardian Spinnarama.

All this glee coincided with a bevy of hockey publication confirming what every fan already knows - that the 2008-09 Habs are built to last long into this centennial season.

Cue Gainey and coach Carbonneau with fever settling wiseness, alerting all concerned that the Canadiens cannot again surprise and that nothing is ever won in advance.

From training camp come stories of a lighter Carey Price, a still energized Kovalev, a quicker Guillaume Lavitesse, and as always a grounded captain Koivu, and you can pretty well deduce where and why the geyser spurts all the optimism one can handle so early in the season.

The puck drops tonight, but don't yank for that towel to wave just yet. After six exhibitions to sort out line combo's, the real deal will get underway.

At that point, it will take another 82 games and then some, to learn whether all this optimism is warranted.