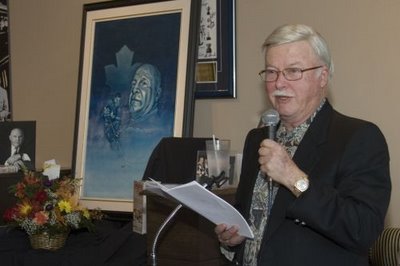 There will be many books issued on the Montreal Canadiens this winter, as celebrations for the club's centennial will demand a flurry.

This one, by former HNIC colourman Brian McFarlane is hardly new. A series of six, for the Original Six, have been around for over a decade. This reissue has a blue tinged black and white photo of Henri Richard being chased down by Jean Ratelle, circa 1970 on the cover.

I wouldn't recommend rushing out to buy this one as I did. It's a disappointment in all kinds of ways. The book is part of the "True Hockey Stories" series, and it certainly contains hundreds of tales - most of them very well known. I was hoping for more insightfulness on the part of McFarlane, who is regarded as an astute historian of the game. It seems the author simply repackages the titles, for the most part, while including many of the same tales

The 200 page book is mostly chronological, but it is littered with factual faux's a ten year old reissue just should not have. I read it cover to cover this past Sunday, and I found it lost momentum when McFarlane's memory and opinion took over in the nineteen fifties - likely about the time the author became immersed in the game.

What really peed me off are his takes on the Rocket, who he doesn't much seem to care for. He offers the obligatory stories of greatness concerning Richard's goal scoring feats in the most glib of fashions. Dry isn't the word.

I could live with that, had the author not gone into precise detail to account every single wrongdoing and slight Richard ever perpetrated upon an opponant. He makes it a point to state - twice - that off the ice the Rocket was an ass. Nowhere does McFarlane ever temper the Rocket's anger with tales of what he had to endure as a player on and off the ice.

The events concerning the Richard Riot seem lifted directly from the note pad of Clarence Campbell. I don't know about you, but I'm not a big fan of one sided accountings of controversial events. 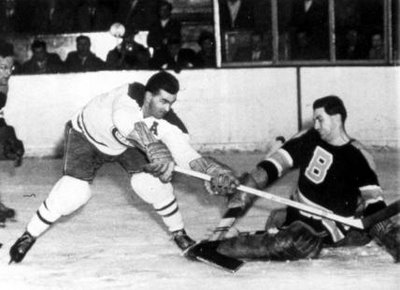 The events concerning the Richard Riot seem lifted directly from the note pad of Clarence Campbell. I don't know about you, but I'm not a big fan of one sided accountings of controversial events.

As I mentioned, it is a reissue of a release that seems originally timed to coincide with the closing of the Forum doors, as it was originally published in 1997, shortly after that event.

The chronology is much skippier by the time the book reaches the end of the 1970's dynasty - by which time the book has lost all of it's initial warmth.

It's all a bit overbearing to read the negativity without a shred of balance by that point.

I bought the book two weeks ago for my ten year old nephew's birthday, now I feel I owe it to him to indulge in some damage control!

Skip this rush job folks, better books for the Habs Centennial will be out soon.

Thankfully, the Coles store where I purchased my own copy had the Carl Brewer and Sue Foster book, "The Power Of Two" for a mere $4.99. Snap that one up instead, if you happen to see it.

Below is a sneak peak at the 10 Canadiens Greatest Games DVD the team is releasing come November. It is a Warner Brothers release, and pre-orders on the net have it at about 48 bucks. Sorry, but that is all the info I have on this for now. 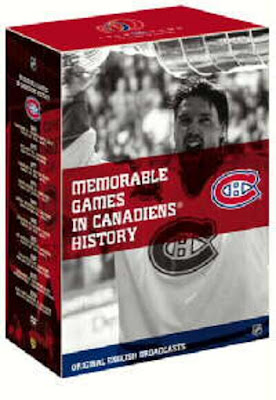