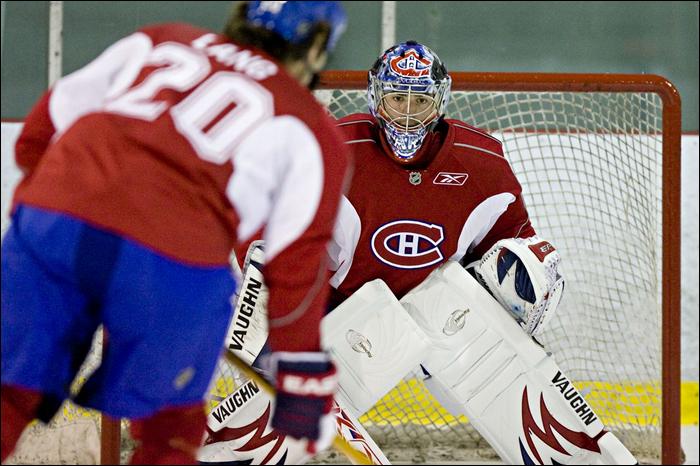 When Carey Price attended the Canadiens training camp this time last year, his goal was to force his way onto the team to start the season.

Price's plans went even better than expected. Not only did he meet his goal, he chased starter Cristobal Huet from the scene. After accomplishing a solid regular season, Price's play dipped in the playoffs.

This training camp, Price has different plans : maintaining his hold as the Canadiens starting goalie, and to succeed come playoff time, where he failed to do so last spring.

"At the end of last season, I was physically and mentally emptied. My body felt like I had played hockey for two full seasons running", Price admitted over the weekend.

The body in question, was heavier than the workload!

At camp's official weigh in last season, Price tipped the scales at 226 pounds. By season's end, the scale read 245. Despite a 6' 3" frame, Price sagged under the weight, and looked badly on several goals scored by the Bruins and especially the Flyers.

After an off season bolstered by training and sacrifices, Price weighed in last week at a sprightly - for him - 217 pounds.

"Honestly, I didn't feel the weight catch up to me last season, but now that I am lighter, I feel much better. It is evident. But I didn't feel as though it was bothering me. I didn't have a hand injury in the playoffs, I was jusr burnt."

When the campaign was over, the direction of the team made it known that the extra weight had become a handicap, and Price sought to deal with it.

The Canadiens sophomore was well served by the example set by Hurricanes goalie Cam Ward, and it convinced him to take his weight problem seriously. After winning the Stanley Cup and the Conn Smythe trophy in 2006, Ward followed it up with a difficult season. Last year, Ward showed up for camp 30 pounds lighter. While injuries to Carolina players snuffed out their playoff hopes, Ward enjoyed a much better season.

"I know Cam, and we spoke about it. Though even before that, I was already convinced that I had to control my weight."

Too many extra servings combined with bad eating choices contributed to the problem.
"Did I have bad eating habits? Yes, and then some. I had tons of them. As a bachelor, I'm not all that swift in the kitchen. Every egg turns out scrambled. The result is obvious. Now that I have dropped the weight, I'm thinking of hiring a nutritionalist and someone to cook for me." 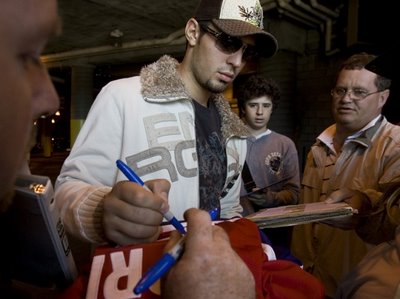 Although camp is still early, and a long season lies ahead of him, Price is brimming with confidence.

In scrimmages on Sunday, Price shut out the opposing A Team, blocking all 11 shots he faced. He'll enjoy a day off before facing the Red Wings on Wednesday.

"Everything's gone well so far. I'm not as tired after practices and I definately feel movements are quicker", says the goalie, who has changed equipement since last season.

"No, just a different body beneath it all."