Lessons From This Weekend's Lang Trade To Montreal

Share All sharing options for: Lessons From This Weekend's Lang Trade To Montreal 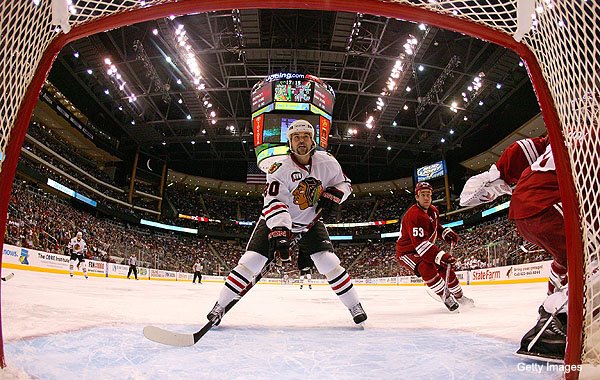 Reprinted at this site to spam warnings at HIO.

The Montreal Canadiens traded a second-round pick in 2010 to the Chicago Blackhawks late last Friday for center Robert Lang. Not exactly the Gretzky Trade as far as impact goes, but still a rather interesting education on the mindset of these two teams.

Lesson No. 1: Youth is served in Chicago. The Blackhawks were talking more about the opportunities the Lang trade will give young players than the vital salary cap savings his departure provides ($4 million). Specifically, Dave Bolland and Petri Kontiola will be counted on to help the team up the middle.

Lesson No. 2: The Bulin Wall will not fall any time soon. The Blackhawks have steadfastly refused to make public a desire to ship out goalie Nikolai Khabibulin, despite his $6.75 million salary. Part of this is the fact that Cristobal Huet is a goalie who only started more than 50 games for the first time last season, so having Khabibulin around isn't all that detrimental for the first few months of the season. But more to the point, the Blackhawks are clearly feeling they are in a strong bargaining position with Khabibulin. They'll listen to offers, as The Fourth Period reports, but they won't actively shop him until the market dictates it. Wait until some team's goalie plans go down the toilet and they come knockin'. Or until Dean Lombardi just can't take the pain anymore in LA.

Lesson No. 3: Alexei Kovalev has sway in MTL. Columnist Steve Simmons of the Free Press writes: "One of the reasons the Montreal Canadiens settled on the usually disappointing Robert Lang is he played well alongside Alexei Kovalev in Pittsburgh." This isn't to say that Kovalev pushed for the trade, but would it shock anyone to see those two reunited on the depth chart? Lesson No. 4: Contrary to reports, The Sundin Derby is not dead in Montreal. Yes, Lang is a Plan B transaction in light of Mats Sundin's inability to commit to playing in the NHL this season. But if Mats decided to suit up for the Habs this December, does anyone in his or her right mind believe Bob Gainey will say "thanks but no thanks ... we're Robert Lang men?"

Lesson No. 5: In the future, there will be no Robert Langs. A 37-year-old complimentary player making $4 million will go the way of Crystal Pepsi in this League over the next several seasons. It's already happened to Bobby Holik, who saw his salary decrease in signing with the Devils. There will be far fewer Robert Langs than there will be players like Kevyn Adams and Geoff Sanderson -- proven veterans who have been invited to camp by the Blackhawks, hoping to stick for a reasonable salary.