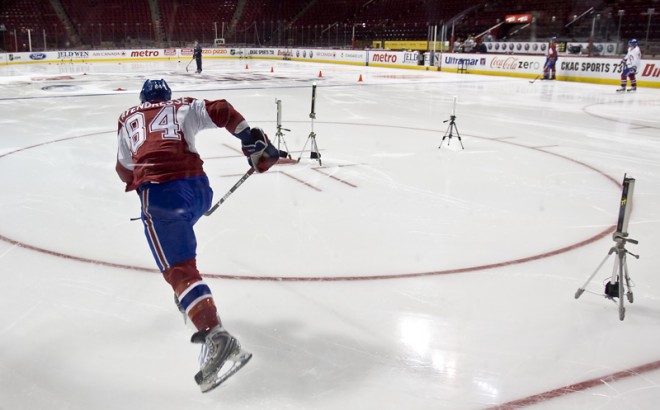 A pleasant surprise was awaiting Guillaume Latendresse on the first day of the Canadiens training camp. The young 21 year old winger found himself on the left side of Robert Lang and Alex Kovalev during the first of three scrimmages Saturday at the Sportsplex in Pierrefonds. The line will be together come Wednesday, when the Habs face the Red Wings in Detroit.

"It's just one practice, but it's quite the beginning. I recall lining up alongside topline players at my first training camp in Montreal, but when you find yourself playing with Kovalev, it's hard to top. I have to seize the opportunity in front of me".

Saturday's lines aren't carved in stone. Coach Guy Carbonneau will pass through many experiments during the six preseason games. This first trial run is an interesting proposition for the skater from St. Catherines, Quebec. 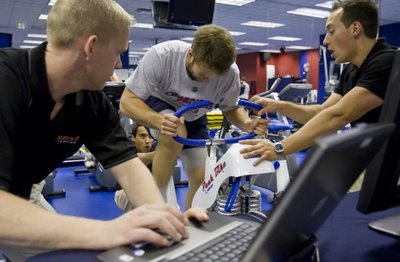 "Our group our centers has never been this strong. I'l be content to play nomatter who I play with ", said Latendresse, alluding of course to Saku Koivu and Tomas Plekanec.

Over the course of the summer, Latendresse improved his skating stride and shed a few pounds.

"I want to take my career in my hands. I don't want to find myself toiling between the third and fourth lines any longer. I'm at a new stage in my career."
Canadiens conditioning coach Scott Livingstone has notice a difference in Latendresse.

"He's satisfied with what I accomplished over the summer months, but I don't need to be reminded. I notice a difference myself. It doesn't feel as though I am battling myself as much on the ice. I have more energy. I still feel fresh enough to have a second practice, no problem."

It was the first time Lang skated with Latendresse. The Canadiens new centreman offered this startling revelation.

"I don't really know him. I only met him for the first time last week, but he is quick", Lang said sincerely. "he looks like a very good player to me." 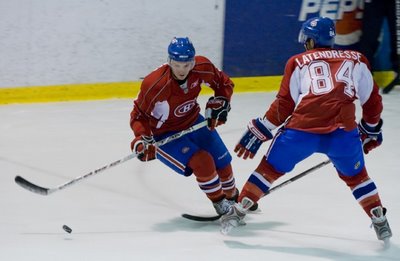 Kovalev also appreciates the efforts made by Latendresse.

"He's working much harder. He wants to improve and become a better player. I hope he become more regular in that he is more focused on what he needs to do."

Carbonneau himself has been pleasantly surprised by Latendresse's progress.

"It's surprising. He's come a long way. Guillaume has recognized that he needed to improve several facets of his game."

"Even though he's been limited to eight or nine minutes of icetime per game, he still managed to score 16 in both his two seasons", the coach added. "Myself, I've always had confidence in his talent."