Share All sharing options for: Habs Chime In On Sundin Saga, New Expectations 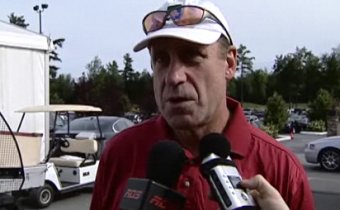 Fourteen players from the Canadiens, in addition to team president Pierre Boivin and coach Guy Carbonneau are on the links at Laval sur le Lac this afternoon for a charity golf tournament. Several media caught up with them, including Pat Hickey of the Gazette, and the audio interviews are posted at Habs Inside Out. Carbonneau and Boivin speak about the Mats Sundin Saga, and players such as Mike Komisarek, Carey Price, Tom Kostopoulos, Steve Begin and Alex Tanguay chime in on the expectations for the new season.

I have transcribed the parts of the Boivin and Carbonneau conversations dealing with Sundin questions below. The individual interviews last on average five to seven minutes. Check out this HIO link for more.

Manager Bob Gainey was also on hand, and was asked the obligatory Sundin question that if did not decide by December, then what then?

"Well, we'll start the season and we're going to play our cards that we have available, trying to guess what might be. But ten, or twelve or fourteen cards lower in the deck, that's not a good card to play."

"We still have room for him. He fits our team beautifully. He knows that, but at one point, training camp is around the corner, and we're gonna need to get on with our lives".

Do you feel it important to have an emissary there to know that you are still very much foremost on his mind to the point that you...

"No, he knows where were at. He has had multiple conversations with Bob. He has all of the information. You know this is not a beauty pageant, this is about a very mature, very established player deciding about his career and about his life. Nobody is going to twist his arm. We'll see."

The fans are starting to believe this is a beauty pageant and that this is a Prima Donna move. Do you think he risks losing the respect of fans just dragging it out like this, and holding up GM's all around the league?

"I don't think so, once he decides, if he doesn't come back, people will understand that this was a very tough decision for him to take, and probably will understand why it took so long. If he comes back, you know, he'll be in training camp, he'll be at a faceoff in an opening game, and life will go on. People will forget. Whatever city he ends up in, the fans will be happy to have him, and those who lost him will turn the page and move on and focus on the team they have."

There's twenty five guy that are hung up right now and could be pissed off at him...

"That's the unfortunate part. The unfortunate part is that his decision has a domino effect on a number of players, and because of there are a number of teams in the running and options on all sides, and the CBA has no provisions for that, and you know he could not land a decision and decide in December that he's coming back, as did Niedermayer and Selanne did last year, so who knows."

Are you guys philosophically open to a possibility of a player like Mats parachuting in say, December or January.

"We haven't even talked about that. I have absolutely no idea. I really don't know how we would react. I would hope that are teams is complete and that we are winning a lot of games and that we are solidly entrenched in the standings and that we don't want to disturb what going on. But you know we get to the trading deadline in February, and you at you look at how you might be able to take yourself over the top, but frankly we haven't had that conversation yet. So it's one step at a time."

Guy Carbonneau doesn't seem to be losing much sleep over what is keeping Sundin awake at night.

"I had a good talk with Bob at the start, when we decided to try to go that route. You know if he decides to come here, and I think the 29 other coaches that feel the same way, anytime you have a guy like that who is allowed to go anywhere he wants and join a team - you know you're going to be a better team - so obviously we had a little boost at the start, but it's not like everytime I got up in the morning that I was reading or looking at my e-mails. We knew that our team was built at 99%, there was room for him if he wanted to come here, but if he does he does, if he doesn't, we're ready to start."

Do you expect there will be more changes, because there is a lot of cap room left?

"Like I said, I think Bob is always trying to improve, there is still a few guys available, and everybody knows that there are some teams that are over the cap. Some teams are a littler higher than they expected to be, and they have until the first game of the season to make room so you never know what's going to happen tomorrow."