Eyes On The Prize Readers - I Thank You!

Share All sharing options for: Eyes On The Prize Readers - I Thank You! 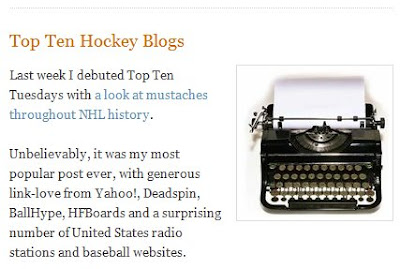 Usually, the calandar date of September 23 means little more to me than it being my favorite rocker Bruce Springsteen's birthday. I share that with another Hab fanatic, T.C. Denault, of Habs World and Hockey News fame.

However, this September 23rd, it is a different boss that was foremost on my mind.

Several concurring happenings lately, have brought into mind just how important it is to me, that you tune in regularly in sweet numbers, to read what I have to say or post on a daiy basis.

This blog of mine is a 23 month old baby, that is healthy and kicking because you readers have fed it. 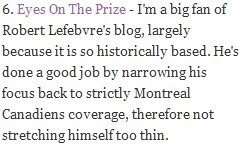 I do not take that with a grain of salt - it quite baffles and amazes me to no end!

As you surely have been able to tell, I love our Habs team. My passion, backed by your gasoline, have helped me make this site a very special one. You readers....fuel me!

I must say that, because, without readers, I am writing strictly for myself.....and there is little motivation in that notion.

This past week, I was humbled to note that I was ranked in a top ten site list by a blogger I most admire - Hockey's Greatest Legends site owner Joe Pelletier.

Joe not only has a killer site, he is also a published author and a quoted historical source on international hockey - so it means alot tome.

Three months ago, back in June, I followed a site traffic meter ranking from an all sports news outlet called Ball Hype. What they do is measure is a blog's impact, based on readership, posts per week, and most importantly, link ups to posts on internet sites.

On the day I signed up, Eyes On The Prize sat in 129th amongst 130 hockey blogs. 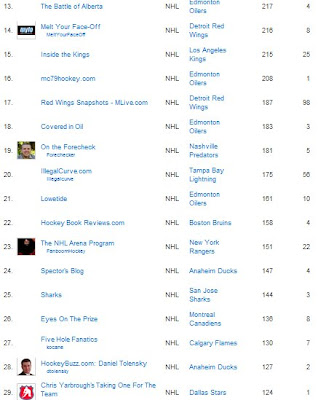 Since June, an additional hundred hockey blogs have registered at Ball Hype. During that time, after some quiet summer months of posting, I endeavored to get busier at my site.

It is with much pride that I can state that "Eyes On The Prize" today, ranks as Ball Hype's 26th most read and linked to site.

As if that wasn't flooring enough for me, readers and other linkers have made this site the top read Montreal Canadiens blog on the internet.

Having all this occur at once, kind of blows the roof of my head!

Humbled, at a loss, and grateful...are all I can summise.

I'd be without a conscience and ingrateful if I did not acknowledge friends at Habs Inside Out and Habs World for allowing this site avenues in which to reach more of you - they have allowed me a rope, a lifeline, and a direct connection to hungry Habs fans such as yourself. 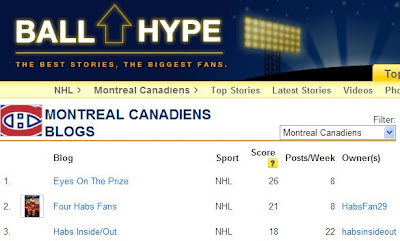 What inspired me today, to acknowledge you all as readers, actually came from Mr. Pelletier's top 10 list of blogs.

As a prologue to his ranking, he bid farewell to a hockey blogging icon in Jes Golbez, a true pionner of this medium.

Jes said goodbye to hockey blogging, thanking all those who assisted him along the way.

His gesture made me think of nothing else but you folks - my readers.

With that in mind, I felt I would rather say "thank you" while things were going well, than at he end, when I reached a crossroads.

Thanks to all of you who have read, taken time to comment, and struck up friendships with me over the past two years.

Without you folks, truly, this space is empty.