Confidence A Key For Higgins

Share All sharing options for: Confidence A Key For Higgins 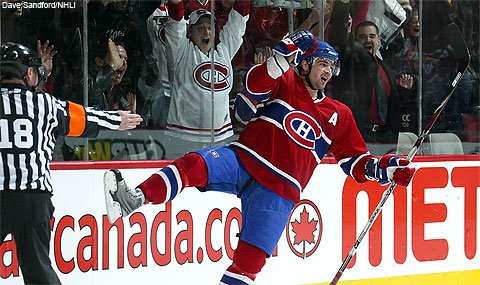 Chris Higgins has added five pouns of muscle to his frame this summer, but he is most concerned with reinforcing mental aspects of his game.

"I'm too easily discouraged. I need to work on that", he says.

"I need to help myself better that way."

Andrei Kostitsyn was the team's other 20 goal scorer, finishing fourth with 26.
For Higgins, the mark was a personal high, after seasons of 23 et 22 goals in his first two campaigns with le Tricolore.

Despite the stats, it was generally assumed that he had an average season, as expectations in his regard were high. Many predictions had him scoring 30 goals or more. 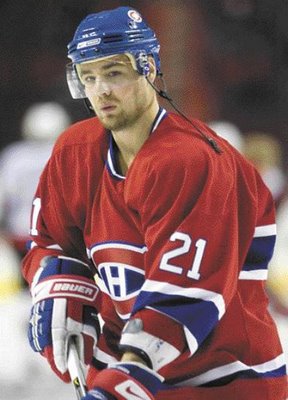 Higgins is the first to admit that he has much to prove this season.

"I hope to continue improving" he allows, "I went through some rough stretches last season. I want to show more consistency and become a more complete player."

Higgins revealed himself to be a streaky scorer last season. His longest goalless drought coming in the 9 games that ended the regular season.

When slumps tended to drag on, the more he was seen with his tail between his legs in the dressing room after games.

"I've always been very critical of myself", he mentions, "I've been the way since I began playing hockey."

The trouble inherant in being this way, is that over time, one becomes mentaly fragile. There comes a time when player must learn to pick themselves up. 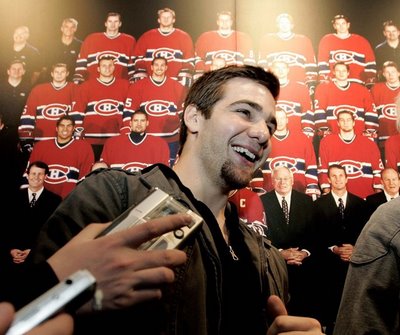 In hindsight, Higgins maintains that much was learned from last season.

"It was my first year wearing a letter on my jersey", he says, alluding to the assistant captain's "A" he was awarded. "That role in itself creates expectations, but I didn't always hold up my end of the deal. I'd wish to be more vocal in the dressing room, if I were able. I want to do what's best in helping the team."

Higgins is one of the large group of players on the club whose contract ends after this season. In his case, he will become a restricted free agent.

He was asked whether such a situation would have negative or positive repercussions.
"The fact that we have so many similar situations on the team could play itself into a negative distraction if players become too individualistic", Higgins answers.
"On the flipside, there could be a positive effect, if everyone is hungry and has things to prove."

"Fortunately, we are a tight group. There's no egocentric players here. Everyone is aware that success passes through the team first, and it is dependent on each contributor."