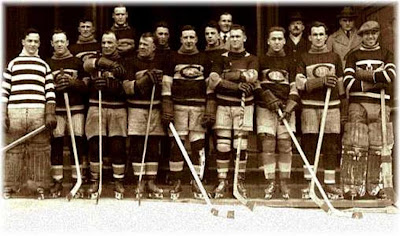 George Kendall Kennedy, the man behind the Club Athlétique Canadien's purchase of the Montreal Canadiens franchise in 1910 passed away in his home on the morning of Wednesday, October 19, 1921. His death was attributed to the long illness brought on by the after effects of the influenza virus that he contacted in 1919 while Canadiens were out west in Seattle challenging for the Stanley Cup.

Though his real surname was Kendall, he began using the name Kennedy, his mother's maiden name, so that he could persue wrestling without his disapproving father being any wiser. Born of Scottish decent, he became one of the better known promoters in North America. After building a reputation in lacrosse and wresting, he set his sights on hockey and founded the Canadiens along with five other businessmen in 1910. Along with Frank Calder, Sam Lichtenhein, Mike Quinn and T.P. Gorman, he is one of five founding fathers of the NHL.

Oddly, Kendall is not a member of the Hockey Hall Of Fame, even though both the Canadiens and the NHL owe him a great debt for his efforts in keeping the team and the game growing through the first world war. 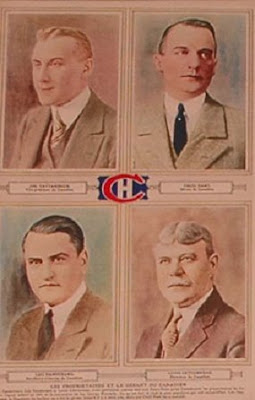 After his death, and within weeks of the 1921-22 season, someone had to assume control of the team, and the task was handed to Kendall's brother Frank. Offers came forth from groups wishing to purchase the Canadiens and the first was tendered by Mount Royal Arena owner Tom Duggan who made a $10,000 bid. Montreal businessmen Leo Dandurand, Louis Létourneau, and former player and manager Jos Cattarinich were also heavily interested, but were unable to be in Montreal due to committments at their Cleveland race track. The trio engaged Cecil Hart to make the offers in their name, and on November 4, 1921, the trio officially purchased the team from Kendall's widow for the sum of $11,000.

Dandurand would become the most public of the three figures soon to be known as the Three Musketeers. He would both manage and coach the Canadiens, while Cecil Hart would come on board as one of the team's directors. Following their first season, the three owners would recoup their initial investment, making a profit upwards of $20,000.

The new manager and coach set about sturdying the Canadiens aging lineup and made an important aquisition that would impact the team for quite some time. A mere three weeks after taking charge, Dandurand sent Harry Mummery and Amos Arbour to Hamilton for defenseman Sprague Cleghorn, whose brother Odie had played wing for the Canadiens for three seasons running. 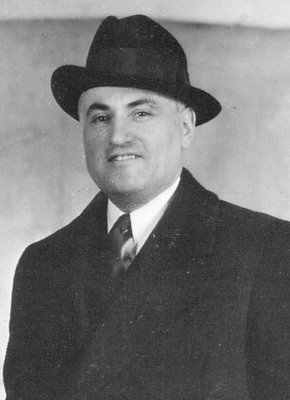 The elder Cleghorn, a much feared and despised competitior, had a large say in consecutive Stanley Cups with Ottawa in 1920 and 1921. He'd bring the same tenacity and mean spirit to Montreal after his rights were traded back to the same Tigers team he refused to report to previously.

Dandurand worked hard to gain Cleghorn, buying out his suspended contract following his refusal to go to Hamilton. One snag out of the way, Dandurand made his offer and Hamilton could not refuse.

Just prior to the Cleghorn trade, Montreal welcomed Billy Coutu back from a one year loaning to the Tigers. Together the pair teamed up to form one of the most vicious defensive duos hockey had known.

Not only would Sprague be a feared backline componant, but he also led the Canadiens in scoring with 17 goals and 9 assists. Brother Odie was right behind with 21 goals and 3 helpers.

During the 1921-22 season, Cleghorn seemed intent on settling a score with the Ottawa Senators and certain members of the team. Possibly upset at being released by the Cup champions on two occasions, he enacted his vengeance with his stick and fists in a game on February 1. Winning the game seemed the last thing on Sprague Cleghorn's mind as he injured no less than 3 Senator players in a single game. He badly sliced Eddie Girard and Cy Denneny with his stick and violently hit Frank Nighbor from behind. All three players would miss a pair of games and Cleghorn was fined $15 and arrested by Ottawa police.

The official on the game, Lou Marsh, described Sprague as a disgrace to the sport in a post game report to the league, and offered that he should be banned from the NHL. Canadiens owned Dandurand was also displeased by the shenanigans and felt it tainted the game. Montreal and Ottawa could not find common ground in regards to a precise suspension, and Cleghorn returned soon after. It wouldn't be his final run in with Ottawa in the coming years.

The Cleghorn brothers set a very unique NHL record in January of 1922, in a game against Hamilton, by becoming the only two brothers to score 4 goals each in the same game.

As successful as Dandurand was in rejuvenating the team, ongoing troubles with star Newsy Lalonde further soured the club atmosphere. Not content with Lalonde's play, nor his results as the team's coach, Dandurand openly criticized his captain and Lalonde bolted the team on January 10.

After Lalonde had missed four games, NHL president Frank Calder was brought in to mediate and settle the peace, returning Newsy to the team. Things were so tense at one point, that rumours of Lalonde throwing punches with the Cleghorn brothers in the dressing room even made the rounds. Upon his return to the team, Newsy was roundly booed to the point where, Dandurand, now acting as coach, would only use him as a sub for the remainder of the season. The 33 year old Lalonde's production dropped to 9 goals and 5 assists after scoring 60 goals in the previous two seasons in Montreal.

Three of those nine goals were scored on February 8, after his return. 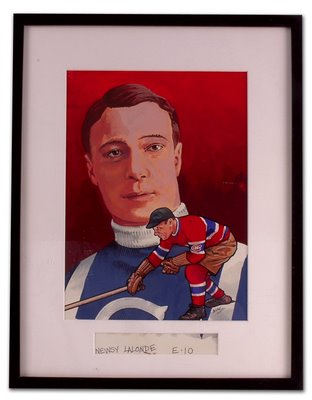 Despite rough times, contract squabbles, and disputes, Lalonde became the first professional player to hit the 200 goal total. He accomplised the feat, mostly with the Canadiens, in a mere 184 games.

Three new players joined the team in 1921-22. Defensemen Edmund Bouchard and Phil Stevens appeared in 18 and 4 games respectively, but neither would go on to a career as Canadiens players.

Dandurand had strange measures for trying to instill discline on the team, and he brought in several team rules, one of which was a ban on motor vehicles for the players. Only a small portion of the public owned cars in the early 1920's, and perhaps even a lesser amount saw them as bad things. This did not stop Dandurand from banning players from owning cars in a contract stipulation.. After the incident in which Jack Laviolette lost a foot due to a car crash, Dandurand went all out to assure the same fate would not strike one of his players a second time.

ONE BOUCHER OR TWO

Dandurand, whose Canadiens still held first rights to french Canadians, implied to the league that it should give Montreal the Senators Frank Boucher, but Ottawa manager T.P. Gorman countered that Boucher was a unillingual anglophone of Irish descent and the NHL sided with him.

Frank's brother, Billy Boucher, nonetheless, was the Canadiens best new addition, and he helped make up for the drop in production by Lalonde, finishing third on the team in scoring in his rookie campaign with 17 goals and five assists. Signed as a free agent by Montreal, December 13, 1921, he would go on to become a vital piece in the Canadiens attack over the next six seasons.

For all the changes made by the Canadiens, from ownership to management, to the on ice makeup of the team, the final standing was much similar to one year ago. Montreal finished the season with a 12-11-1 record, one point behind last year's pace. They finished in third place, two points behind the St. Patricks and three behind the Senators.

The season record for Montreal is quite deceiving upon recognizing that 7 of the teams 12 wins came at the hands of the lowly Tigers. The team did however make a late season push to catch the St. Patricks, going 7-1-1 in their final nine games.

The Canadiens, whose record mirrored its standing of 1921, were clearly in a period of transition, and there would evidently be more changes on the horizon. The team could console themselves in knowing that despite all the inner turmoil on the team, they were but two points off from the Cup's eventual winner. 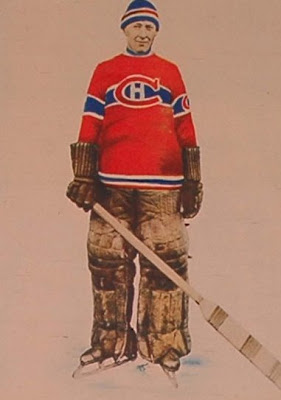 Ottawa's Punch Broadbent was clearly the star of this NHL season. With a 16 game consecutive goal scoring streak en route to a 32 goal campaign, Broadbent led the league in scoring and helped the Senators to a first place finish.

The NHL was also moving ahead and they abandonned the split schedule format for a complete 24 game season in which the first place and second place teams would challenge for the league title and the right to compete for the Stanley Cup. The victor of the two game, total goals series was Toronto, and they went on to defeat the Vancouver Millionaires 3 games to 2 to claim the franchises first Stanley Cup. 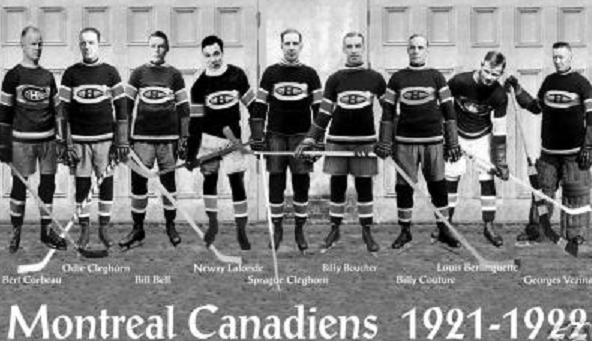 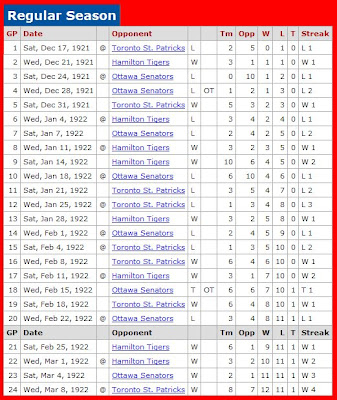 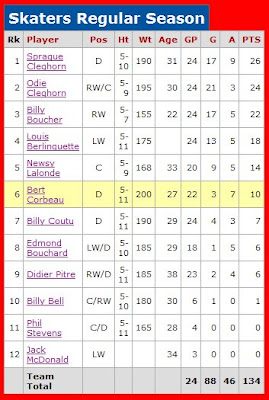