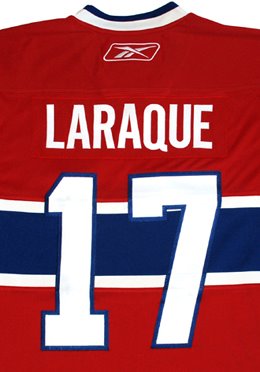 RO: What was the experience like helping a young Pittsburgh Penguins squad make it all the way to the Stanley Cup Finals last season?

Georges Laraque: It was fun, but I try to forget about it because we lost in the Finals and losing there is one of the most, you know ... it's one of the hardest things there is. Twice in the last two years really kills you. Not knowing how many chances you'll have at it, it's tough to get there and lose.

RO: How much of a role did Montreal being your hometown play in your decision to sign with the Canadiens?

GL: It was 50/50 between Edmonton and Montreal. They're both home to me. My mom is in Montreal and I let her make the decision. My family in Montreal hasn't had chance to see me play live much, and I played here for years so that's why.

RO: What else attracted you to the team and how do you feel you fit in on the roster?

GL: At the end of it, that was the factor. Everyone from there can come watch me play. If you don't fit on the roster, teams don't go out there and sign you for a three-year deal. I think it's just like Pittsburgh, they're a good young team in Montreal and they need that physical toughness. I'll be a fourth liner, but it's the same job I had in Pittsburgh.

RO: What was the free agency experience like, in general? Were you anxious to sign with a team or did you want to ride it out to see what kind of offers would come your way?

*Note that Georges broke in at the ‘anxious' part with "no, no, no..."*
GL: No, because it was between Edmonton and Montreal. They both made me an offer and they were the same but Edmonton had a fourth year. It was even better in Edmonton because of the tax, in Montreal it's 55% and in Edmonton it's only 40% but it was my family that decided really. At the end of the day it was between those two places and I knew both wanted me so I wasn't worried.

RO: Have you met up with any of your new teammates yet? What kind of chemistry do you feel the team will have next season considering all of the changes?

RO: What kind of confidence is there in Montreal, especially with additions like yourself and Alex Tanguay, about the Canadiens' ability to contend for the Cup in such an important season for the franchise (the 100th year)?

GL: They're a young, powerful team and if the chemistry works out we could be really powerful in the East. Obviously we don't want to talk about the West and Detroit with Hossa, but for not we're just talking about doing well again this year. They finished first last year and we want to do that again, and I'll just try to be there and help another young team do well.

RO: Your reputation in the NHL is as an enforcer and sometimes that can unjustly have a negative connotation to it. As one of the most widely respected enforcers in the game, how important do you think it is in today's NHL to have a capable physical presence in the lineup like yourself?

GL: During free agencies, some guys take a while to sign, but all the tough guys got signed right off the bat. They were done right away. You can say whatever you want about the job, but they were the first to be signed – everywhere – so that just tells you the importance that it is to a lot of teams to get, you know, a tough guy to look after their skill players. Like for me, I knew I was going to have a variety of choices for the job that I do and the fact that I can still play. I'm proud that over the last few years, where people have said that, that there might not be a place for a player like us, people have realized that's not the case. Now my job is secure.

RO: The Oilers were one of those teams trying the ‘no enforcers' waters, when they let you go to free agency in 2006.

RO: The elusive Daryl Katz - what do you think he'll do for the team?

GL: I'm actually really good friends with him and I see him at my gym every morning. He's a great guy who wants to win and he's committed. Fresh blood coming in and stuff can only help. He's well-liked, he's a great guy, and it's a great move for the team. Instead of talking to 16 people they just need to talk to one guy and that one guy will do whatever it takes to win.

*Note from Rod: For what it's worth, based on past conversations, I know that Georges is a little uncomfortable about the effect his role on the ice has off the ice. Not with the media or the league offices, but with the kids he deals with on a seemingly daily basis. He's said it breaks his heart when he sees a kid who's scared of him because he "beats people up" and always wants to change that kid's mind.

I don't think he stays up all night replying to e-mail from fans anymore, but he's definitely one of the most community-friendly players in the game – always active with some charity or another ... anything involving kids.* 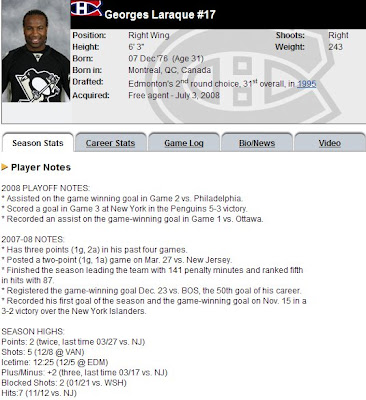