It Was 20 Years Ago Today

Share All sharing options for: It Was 20 Years Ago Today 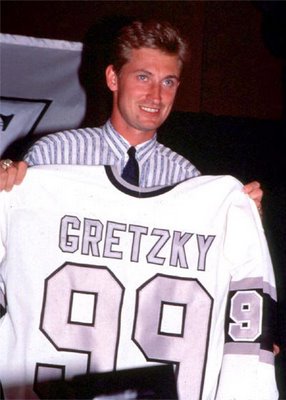 "It was 20 years ago today"....are famous words that opened the Beatles Sgt. Pepper album - which I thought sucked it big time. I'm a mega Fab Four fan that owns over three dozen discs, but that one in it's entirety will never do it for me.

Just as the Wayne Gretzky trade that happened "20 years ago today", sucked it big time as well.

The trading of Wayne Gretzky to the Los Angeles Kings on August 9,1988, changed the NHL hockey landscape forever - for better or worse, depending on where you sit geographically.

I recall exactly where I was at the time the trade went down. I was working for an oil company that annually gave each of its 40 employees a pair of tickets to a Canadiens game.

Numbers were randomly drawn awarding each of us one of 40 games. I had an aunt that worked for the company who's husband, my uncle, was a big Toronto Maple Leafs fan. She rarely used the tickets, and once I'd joined the company, she'd pass them onto me.

In the summer of 1988, our company owner received his tickets shortly after August 1st.
That summer, I had drawn the Los Angeles Kings as tickets, and my aunt had drawn the Detroit Red Wings.

There was always the usual wheeling and dealing of tickets inside the office, with favors and dibs on next season's tickets from last season's promises.

In the summer of '87, I'd made a switch and owed the company owner a favor, and I also had made a longstanding promise to my aunt, that if ever I'd get my hands on Leafs tickets, that I would bring my uncle along.

My aunt gave me her Red Wings tickets that summer, which was convenient, as the company owner was a Red Wings fan. He had Edmonton Oilers tickets and agreed to switch on his one minor condition - he owed a favor as well. One of our employees was related to Luc Robitaille of the Kings, and if I switched my Kings tickets with him, I'd receive the Oilers stubs from the boss.

I didn't even inquire about which game I would receive in return from his owed favour, I was just thrilled to the max that I was going to see Gretzky and the Oliers against the Habs.

The deal was a double no brainer for me, when the three way trade allowed me to get not only the Oilers tickets, but via the Robitaille acquaintance, but tickets to a Leafs game as well, satisfying my uncle, who had never in 60 years seen his favorite team in the flesh.

Life couldn't be better, as I was off to see Gretzky and the Oilers on November 26, and a Habs and Leafs tilt on January 21.

On the morning of August 9, I took my two sets of Canadiens tickets from my safe at home where I store all things of precious value to me, and headed off to work early, as I had a six hour, out of town run scheduled.

I must have been in quite the hurry that morning, as I finished my run ahead of schedule and returned to the office shortly after one o'clock. Catching everyone returning from lunch hour, I dropped off what I had picked up, and made the three way ticket exchange at about the same time.

Heading out to lunch, I clicked on the radio to pure horror, as it was announced that Wayne Gretzky had been traded to the L.A. Kings in a blockbuster deal. I turned my Jeep Cherokee around, heading back to the office in a red light dashing frenzy, and literally poll vaulted the steps to our second story office.

I quickly scanned the office layout for stunned faces, but soon learned that every hockey fan was glued to one radio in the secretary treasurer's office, listening in on the trade news.

Everyone at work knew the hockey fan that I was, even before I began pleading on bended knees for my Kings tickets back, and one of the other two transaction partners agreed to undo the three way deal.

I bargained hard, offering my Leafs game tickets in addition to the Oilers game, for the return of the Kings tickets.

In the end, our accounts receivable person could not envision me taking his 58 year old wife to the Forum without him, gas trip paid along with meal money in Montreal.

I never did get anywhere as near an opportunity to see Gretzky play.

Back when this Eyes On The Prize blog was in it's infancy, I wrote about the NHL in general, before zooming in to focus on the Habs on a pretty much permanent basis. In the summer of 2006, I took on a great detailing of the Gretzky trade, in a three part series.

Here is how I disected the whole deal:

Beyond these posts, no one has covered the trading of Gretzky better than Joe Pelletier at the Hockey's Greatest Legends site. Joe has amassed an unparalled 50 plus links to distictive stories regarding that historic. It's an all timer of book marks for hockey afficianado's.