Share All sharing options for: A Habs - Leafs Joke 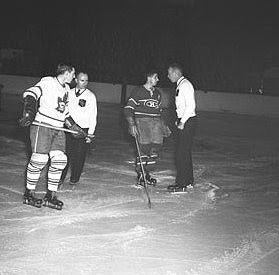 I'm not sure exactly where I came across this little trivial factoid.

If you happen to read this site often enough you will get that I do all kinds of research into Canadiens history and stuff, so I will apologize right up front for a blurry lack of precise clarity on the names of players quoted in this bit of humour.

I may have found this laugh at HIO, or in a book I've read lately, but I swear on my signed Lafleur RC that it is absolutely 100% truth.

In the 1940's, All Star games pitted Stanley Cup champs against the best of the NHL's five other clubs, and the games then were showcased at the beginning of the season, prior to the start of the regular season schedule.

At one particular event held at the Forum, players from the All Stars and current Canadiens squad inevitably bumped into each other inside the building over the course of the day.

The Habs Elmer Lach and the Maple Leafs Syl Apps, to the best of my recollection, were the players involved in this conversation. I could be wrong.

Players from this era rarely spoke to one another off ice. It was the Original Six era, where every rival was a hated rival.

The conversation took place in a restroom somewhere in the Forum, when a Canadiens player stood silently, as a Leafs player relieved himself at a urinal right next to him.

As they finished up and turned in opposite directions, the Toronto player heading to a sink exclaimed:

"On the Toronto Maple Leafs, they teach us to wash our hands after taking a pee!"

To which the Canadiens player, heading straight for the door replied"

"On the Montreal Canadiens, they teach us not to piss on our hands!"

Anyone knowing the names of the players involved in this exchange, the time and place this happened, and where I might have come across this, are kindly asked to clue me in!
.