Share All sharing options for: 1914-15 NHA Season: A hard fall to last place

The Canadiens sixth season is marred by contract squabbles and the ongoing tug of war over players with the Pacific Coast Hockey Association.

The one year delay in Newsy Lalonde's promise to the Vancouver Millionaires to head west and play for them in the 1914-15 season gave him just enough time for him to change his mind.

Just before the beginning of the season, the teams are informed of Lalonde's decision in November, and the Canadiens suggest that Vancouver keep Didier Pitre for another season. Of course, Pitre won't have any of this, as he feels the pull of Montreal hockey fans who desperately want him back. Vancouver is left with no other choice but to trade Pitre back to the Canadiens for a sum of money, which suits the Canadiens just fine.

Lalonde's contract is another problem as Newsy holds out for more money, wanting a better renumeration than Pitre, George Vezina, Jack Laviolette and Don Smith. Manager George Kennedy refuses to barter, and suspends Lalonde, fining him $100, and a subsequent $100 for each week of the season that he misses. Jimmy Gardner remains on as team captain.

In February, the Canadiens trade Smith to the Wanderers for cash shortly after Lalonde returns, having worked out a deal secretly with Kennedy. Newsy is not back for long, as the team suspends him once again, this time for lacklustre play. In all, Lalonde plays but seven games for the Canadiens in 1915, scoring four goals and three assists.

The personel squabbles make for a difficult start to the season for Montreal, and they drop their first four contests and never recover. Despite high hopes with 9 returning players in addition to Pitre, it would be a miserable season for the Canadiens. They would finish with a 6-14 record and they would surrender almost an additional goal per game. Vezina, who was named the league's best goaltender in three of his first four seasons, finishes third in goals against.

Five new players joined the Canadiens ranks in 1914-15 and they included Albert Corbeau, Jack Fournier, Nick Bawlf, Ed Lowrey and Marcel Béliveau. Corbeau, a right shooting defenseman, who signed with the team on December 23, would spend 8 seasons in total with the Canadiens. 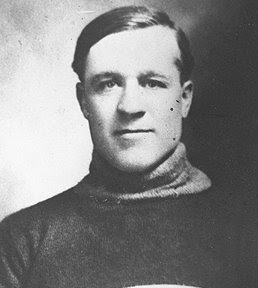 The off ice commotion left many scars on the team throughout the season. Gardner, as coach and captain, asked for a pay raise in light of his cummulative duties following the season. His stand was rebuffed, and he retires to officiating.

George Vezina's temper emerged in a few matches. On one occasion against Quebec, he is penalized and tossed from the game for hitting Lalonde's rival Joe Hall - even though it is Vezina who goes flying and takes the goal net with him. With the Bulldogs behind 3-2, Laviolette replaces him in goal, and Quebec ties the game. As was then permitted, Vezina returns in extra play, only to surrender the fifth Quebec goal in a game that went on record as the longest overtime to that point. Fifty minutes and 28 seconds of additional play for needed to settle the contest.

The Canadiens finally won in their ninth game, a 7-2 win over the Wanderers on January 23. The game was marked by a 5 goal performance by Didier Pitre, who was one of the few Canadiens having a good season. Pitre would finish second in the NHA in goals this season with 30, and along the way becomes the first Canadiens player in history to net 100 career goals. On January 30, Pitre would notch a pair against Percy Lesueur of the Toronto Ontarios to achieve the feat in only 74 games. 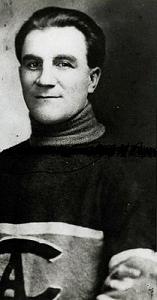 Strangely enough, the Canadiens dressed six english speaking players in 1915, in contravention of the two player ruling. Other than Gardner and Pitre, Harry Scott, Bert Hunt, Nick Bawlf and Ed Lowrey were english speaking. The Canadiens tried to sign and dress a seventh, the legendary Art Ross, but the league governors stepped up to stop it.

Ross, who incidently had no connection to the Canadiens whatsoever beyond this boardroom battle, had his case argued for heavily by Montreal manager Kennedy. A rugged defenseman in his day, who never shied away from conflicts with authority, Ross had been banned from the NHA in this season for attempting to launch his own league. He had been organizing it quietly on the sidelines, and had signed on close to a dozen players when he was sniffed out by the league. Had Ross named the players he had signed, his suspension would have been lifted, but he refused to do so and it took Kennedy's effort to get him reinstated. Once that was accomplished however, he was not allowed to join the Canadiens. Upon his January 7 reinstatement, Ross signed with the Ottawa Senators. 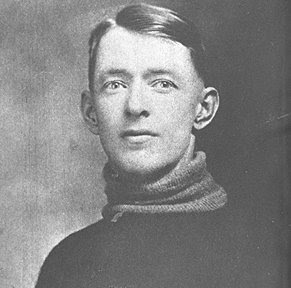 Art Ross would go on to play and coach with the Wanderers, Hamilton, and later in Boston. He became a highly respected league governor, despite punch ups with NHL presisent Red Dutton and Detroit owner James Norris. It is curious in hindsight to note that although today's NHL leading scorer trophy is named after him, Ross only ever scored one goal in the National Hockey League. The reason for that oddity is that when Ross donated the trophy in his name in the late 1930's, it was to be given to the player judged as the league's most spectacular. Being that it was difficult to agree on how to judge such, the trophy went unawarded until 1948, whereupon it was given to the league's leading point scorer.

There was a little more controversy after the season had ended when it was revealed by players on the Bulldogs and Canadiens that they had been approached by gamblers offering wine bottles to them to help fix games. The ringers were not punished in light of a brief investigation that found no scores had been tampered with. 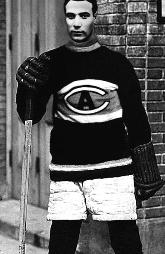 Towards the end of the year, the directors of the Westmount Arena announced that starting in 1915-16, there would be artificial ice at the arena. Other changes incurring in the NHA during 1915 included the Ontarios changing their name to the Shamrocks. The former Tecumsehs, now on their third name change, would not survive the year.


New rulings in the game included pucks played after rebounding from goalkeepers no longer being ruled offside, players standing a minimum of five feet away in distance from players facing off, and match fouls were now penalized by 10 minutes off and $15 fine. Charging a player into the boards is added as a major foul.

Even without Newsy Lalonde, the Vancouver Millionaires became a powerhouse. In the first year of PCHA champs meeting the NHA winners, Vancouver won the Stanley Cup over the Ottawa Senators three games to none. 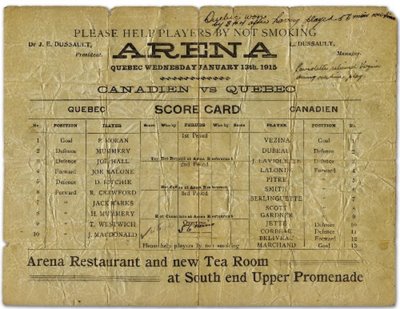 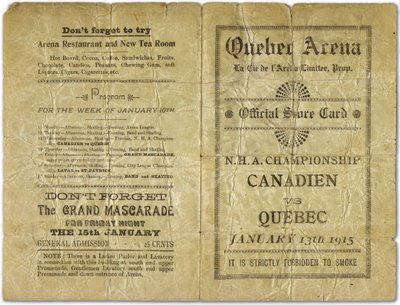 Some photo notes: What you see directly above is an "Official Score Card" from a Wednesday, January 13th, 1915 game at the Quebec Arena between the Bulldogs and the visiting Montreal Canadiens. The flimsy and tattered paper piece has multiple creases and was plasticized at some point to prevent further deterioration and allow for handling. And what a treat to handle! The Canadiens’ lineup featured Hall-of-Famers Georges Vezina, Newsy Lalonde, Didier Pitre and Jack Laviolette, the latter relieving Vezina in goal during overtime play when Vezina was assessed a penalty for clipping Joe Hall! Joining Hall for Quebec was goalie Paddy Moran, while Joe Malone is listed in the lineup but did not play because of an ankle injury. Newspaper accounts relate that Quebec City had never witnessed a more hotly contested or sensational game than this one which ended after 50 minutes of overtime when Jack McDonald’s second goal of the game gave Quebec a 4-3 victory. Don Smith, twice, and Pitre had scored for Montreal, with Harry Mummery and Rusty Crawford getting Quebec’s other goals. Remarkable pre-NHL relic measures 10-3/4" by 8-1/4" and is museum worthy.

The photo of skates are those belonging to the Georges Vezina in this era.

Another photo note: The picture of Newsy Lalonde in the "CA" logo is a composite, photoshopped by someone with a creative side. Considering that Lalonde spent more time away from the Canadiens team than he spent time playing in 1914-15, there are precious few photos of him in a "CA" from this era. The head of Newsy is from an entirely different photo, and the "CA" logo was either drawn onto this sweater erroneously. The backdrop is actually a Seattle photo shoot from 1919. 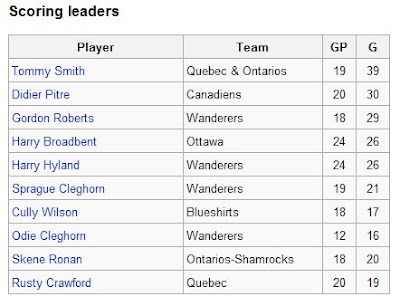