Share All sharing options for: Habs Handcuffed By Sundin? 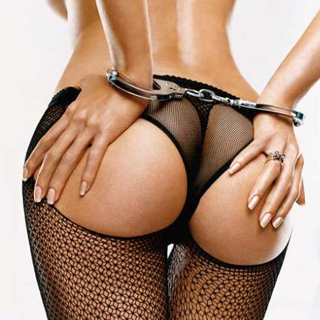 Robert L Note: Regarding the pic....I read Four Habs Fans everyday. I Googled "cuffs" and this is what came up. Call it my flattering way of saying hello!

So Mats Sundin remains undecided as to what his hockey future holds!

I wouldn't want to be the waiter waiting on him in a restaurant! He'd order water, ask for some time. He's not even sure he's hungry!

Despite numerous attempts by Canadiens GM Gainey to take his temperature, there isn't even a sign of a pulse.

This puts the Canadiens in a quandry today, as the team clearly pinned their hopes that Sundin would be interested in playing in Montreal. Apparently, the big Swedish center is interested, if he does decide to pursue his career.

He has mentioned through his agent that he is impressed with Bob Gainey and his endeavors to sign him, but it all ends right there for now.

There have been back and forth chats between the three parties, and only they are privy to what they are worth.

It begs many questions, for starters, does Gainey wait Sundin out and risk coming up empty on the free agent market?

Are there plans B and C in place, and are they viable solutions to the Canadiens continued improvement?

How does this scenario affect other potential signings with the team?

Will Bob, or has Bob, imposed his own deadline for a concrete answer from Sundin?

Another question that some people will see as valid, in terms of the perception of the team and Gainey to land that targeted big fish free agent, is that if the Canadiens fail to reel in what they seek, should it be taken in the context that star players simply do not want to come to Montreal?

Before getting to the answers, perhaps a look at the big picture is in order, for the sake of balance and common sense amidst all this free agency frenzy.

To begin with, despite what some people might think, the Montreal Canadiens are in awesome shape. They finished first in their conderence last season, led the league in goals scored, own a jealous crop of rising youngsters, and are run by one of the best management teams in the league. They are progressing slightly ahead of plans.

On the flipside, after a very surprising regular season, they were knocked out of the playoffs by a team they should have beaten.

What is raising the stakes in this free agent summer is the fact that the Canadiens are possibly one solid signing away from being a legitimate Stanley Cup contender. They are also entering their 100th anniversary season, which for many translates into the silliest notion that the team ought to go for broke to try to win a Cup in it's centennial season. I don't follow that compromised lack of logic, but I understand why others are caught up in it, including the organization itself.

But that's another thing altogether!

The way I see it is, if the team's most identified need is at center, how does signing a player who fits in anywhere else remedy that?

What the Habs need most in order to maximize the assets it already owns is a centreman and nothing else.

Should Gainey wait Sundin out?

I'd be tempted to say "not a chance", but there is no other center of Sundin's stature that could add the same things to the team as he would. Gainey should wait it out only if Sundin has given a solid verbal reason to him, such as saying, "Bob, I'm leaning towards playing next season, and if I do, the Canadiens are the first team I will contact. I promise you that. I should know in two weeks how I feel."

If Gainey has not heard a statement similar to this, he ought to think to himself, "Thanks for nothing", and move on.

Are there other viable plan B and C solutions?

The other two highest profile free agents available are Marian Hossa and Brian Campbell. While both are quality players, I'd be cautious to guess exactly what they could add to the Canadiens.

My guess is both will be looking for about 8 million dollars to sign somewhere.

Hossa would obviously be an upgrade on wing for the Canadiens, but they are about to hand a King's ramsom for one good year's work to Andrei Kostitsyn. The signing of Hossa would bump him down a line. It would upset the apple cart some, with not enough offensive centers for all the firepower on the wings. The Habs would be creating another Michael Ryder, searching for his game, the odd man out.

As for Brian Campbell, I think he is being overpriced in this free agent season because he is clearly the lone markee offensive blueliner out there. Heck, he doesn't even have Souray numbers, but is set to command quite the pricetag. Of course Campbell is way more rounded in his game by a longshot, still he is no physical specimen. If a team is spending that type of money on a defenseman, they should get the whole package.

Campbell's numbers in the end might resemble Mark Streit's totals, which the Habs could have at half the cost.

So plans B and C may just become finding cheap ways to upgrade the third and fourth lines. That wouldn't be the worst thing!

This scenario would affect other potential signings by the team by causing the Canadiens to focus their upgrading of the club from the bottom up instead of from the top line down. In other words, is there a better Bryan Smolinski out there? Would Brooks Orpik be an improvement on Ryan O'Byrne.

My say is, for the extra dollars, why even bother?

If Gainey has not given Sundin a deadline date beyond July 1, I hope that his patience is based on something concrete that Sundin has said. Barring a definite gauge of Sundin's interest for Montreal, Gainey will know whether to move on or not based on the talks they have had.

For now, all scenario's point to little happening for the Canadiens on July 1.

Of course Gainey will be criticized, it comes with the territory! Regardless of the efforts involved, it will be perceived in many corners as a failure by Gainey, but nothing will be further from the truth.

Gainey was criticized for not adding Hossa at the trade deadline last February.

Gainey was also commended for not overpaying for Hossa at the time, and compromising the future of the team.

Many free agents will be calling Montreal and the Habs will not be interested for a variety of reasons, some listed above.

What it comes down to, is that Gainey long ago identified Sundin as the one concrete upgrade the Habs could sensibly make.

He's gone out on a limb to secure the rights to negotiate with him ahead of free agency - from the Maple Leafs, no less.

If it doesn't work out, why is Gainey to blame?

He set the table by adding Alex Tanguay at the draft immediately after the prosepective deal with the Leafs.

As a fan of the team, I'd be more worried if the Canadiens were to panic and begin adding players after July 1 that have no place.

My take is that if Sundin refuses the Habs advances, then it is truly time to start signing what is already in the Canadiens stable to long term deals that will be bargains years from now.

What else would be as sensible and sound?