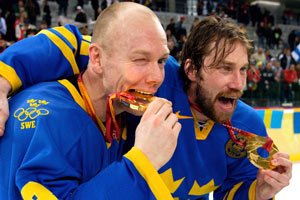 Canadiens GM Bob Gainey has delivered on his promise to deal for an impact forward to strengthen the team's top offensive lines by acquiring winger Alex Tanguay from the Calgary Flames.

Gainey may not be done delivering on the promise.

As the whole world of Habs fans has surely learned at this time, Gainey has also acquired exclusive rights to negotiate a contract with (former) Maple Leafs captain Mats Sundin up until the free agency period starts at noon on July 1.

Simply put - a bombshell in the making!

I truly believe, as I have all along, that Sundin will become a Montreal Canadien.

I also feel that there is alot more not being said about this by Gainey and counterpart Cliff Fletcher. The deal is a conditional one, and the Maple Leafs GM would grant Gainey the priveledge if he didn't feel a contract could be worked out.

It is also doubtful that Gainey will be parting with anything of substance should talks with Sundin fail to yield the desired result.

If Sundin doesn't sign, Toronto receives a late round pick in the 2009 draft. It is also possible the Leafs do not receive anything in the event Sundin goes elsewhere.

If Sundin signs on for a year, the Leafs might get a roster player or higher round draft pick.

If Sundin adds a year or two to the deal, a player and a pick might go the other way.

In any facet, I believe it's a win win situation all around for the Canadiens. How can it not be, when there is a possibility of adding Sundin - and Tanguay - to the league's most potent offensive. Even upon subtracting Mark Streir and Michael Ryder, the Habs PP unit looks even more killer.

Adding Tanguay was a strong first move for Gainey in helping to lure Sundin. Tanguay is a fluid passer and playmaker who knows how to create in the space he finds for himself. He is by no means a physical pressence, but he will help to make many players around him better. He is instinctive at feeding off great offensive talents and completing and complementing their efforts.

Sundin would bring the more physical one on one game that the Habs lack from one individual player other. Other than Alex Kovalev, the Habs do not have many singular talents worthy of the extreme attention of other team's checkers - not yet anyway. Sundin would likely thrive in such a setup, as for the first time in years, he would not feel the burden of having to carry a team's offensive thrust all by himself.

When you think about it, the situation for Sundin is rather ideal. He wants to go to a team where he can help them achieve the Stanley Cup. If he does land in Montreal, he'll have a strong cast of capable allies to assist him in helping out.

Many fans will be pinching themselves some, or refusing to submit to the notion that Sundin will suit up for the Habs.

Both Gainey and Fletcher, not to mention Sundin, will be tightlipped about how this deal all went down until it reaches a conclusion sometime between now and the next ten days. Reading Eric Duharschek's column in the Globe this morning, it's hard not to wonder exactly what Fletcher was adhering to when he said, "Mats has always been interested in Montreal."

Fletcher then added, "Montreal is trying to see if they can sign him now - and then we'll go from there". It would be better if you guys hadn't found out."

Clearly, one year ago, the notion of a scenario such as this would have been lucridous.

It goes to show how far the Canadiens have come in a season.