Habs For Breakfast - The Script Remains The Same

Share All sharing options for: Habs For Breakfast - The Script Remains The Same 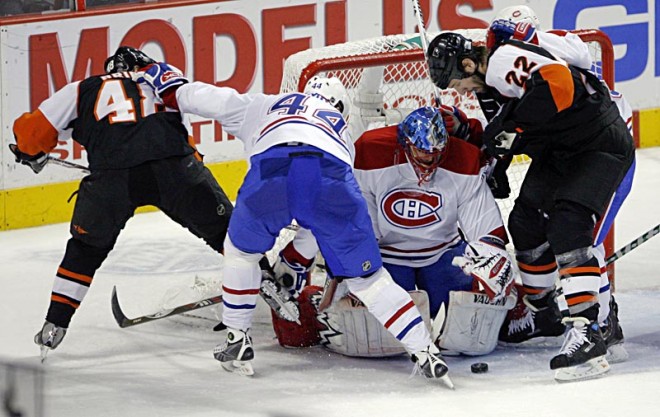 The experiment of tossing Jaroslav Halak between the pipes did not work as Guy Carbonneau had planned, just as I figured it wouldn't.

While goaltending has been a concern, the Canadiens biggest issue has been it's inability to convert on it's numerous scoring chances. There wouldn't have been much Halak could have done to rectify that.

This game played out like the three before it.

In this series, we have yet to witness how the Canadiens, the defense and goaltender, would play if given a lead to support.

Both are empty consolations.

The Canadiens can take something from the fact that they are doing many things well so far if that adds up to anything. They can build on that on continue to forge ahead believing that something's got to give sooner or later.

The veteran's on the team will surely recall to the younger players that coming back to win three straight is doable. In very similar circumstances, the 2004 Habs did it to Bruins. This time the Canadiens are the top seed and not the eighth. Like Biron, Andrew Raycroft was then playing over his head until the Habs solved him.

Do the players believe it can happen again.

Habs on brink of elimination - Gazette

"Sooner or later, if time doesn't run out on the Cinderella Canadiens, this team will learn what it's like to play with a lead. It's entirely possible, however, that midnight will strike first." - Dave Stubbs

"There has been a lot of whining in this city about the penalties that have been called against the hometown Flyers and those that haven't been called against the Canadiens. But there were no complaints from the Flyers last night as they took advantage of an unnecessary penalty by Steve Bégin late in the third period and scored on the ensuing power play to snap a 2-2 tie." - Pat Hickey 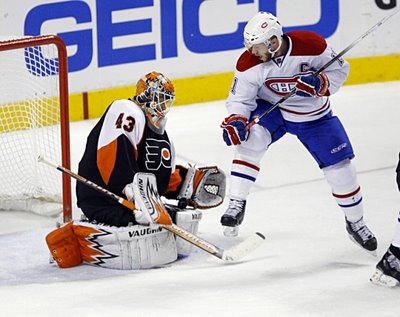 Going with Halak was a gutsy decision, but it didn't stem Flyers' tide - Gazette

"Canadiens goaltender Carey Price was talking about being pulled from Game 3 of the Eastern Conference semifinal and said sometimes it's good to look at the game from the bench. Price got a longer look last night as head coach Guy Carbonneau played the wild card and decided to start Jaroslav Halak in Game 4." - Pat Hickey

"Montreal Canadiens head coach Guy Carbonneau went far more with his gut than with his brain when he elected to go with an untried 22-year-old sophomore in goal rather than the team's 20-year-old rookie sensation. "It's my decision," Carbonneau said, "because I'm the one who's going to get blamed." - Roy MacGregor

"The Montreal Canadiens can crow all they want about how the final scores have not been indicative of how well they have played against the Philadelphia Flyers. But they can't conceal the reason they suffered a 4-2 loss last night: mistakes at inopportune times." - Tim Wharnsby 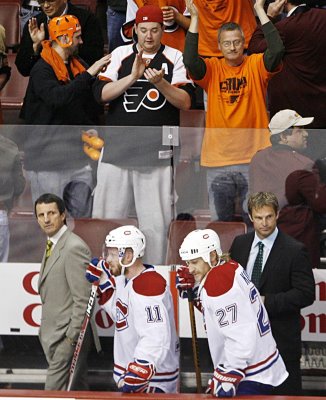 Reasons To Believe - Lions In Winter

"Saku Koivu: The best pressure player I have ever seen on any team I support. In the past 4 NHL seasons, he has played in 6 elimination games. In those 6 games, he has 2 goals and 9 assists, and has been the star of most as well. That's even without considering his victories over terrible injuries and illness. Can he play better? We may find it hard to conceive how he might, but he will – it's what he does." - Topham

"The Canadiens have tried...boy, have they tried! We can pick their play apart all we want, but the fact remains, they've outshot and outhit the Flyers in every game. They've had chance after chance and hit post after post when Biron wasn't robbing them blind. Sure, they could get more bodies in front of Biron...but we know our team isn't that kind of team. They don't have the personel to change styles just like that. They're a speed, finesse team. It's how they're built and how they thrived all season long." - J.T.

Sounds Like A Country Song: The Dog Got Run Over By A Pickup Truck, I Gotta Pay Money To The Man, And The Philadelphia Flyers Beat The Habs - Dennis Kane's Excellent Montreal Canadiens Blog

"Montreal’s scoring slump has happened, inexplicably, in the playoffs, and there’s no time to work it out. It has to be now. Not next week. They’ve dug a deep hole, and there’s been only periodic flashes of fire and getting their noses dirty during this second round against the Flyers." 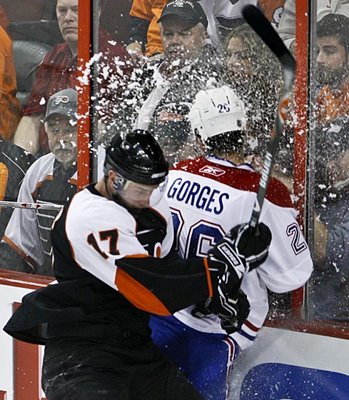 More from Habs Inside Out, RDS, La Presse, and Le Journal