Share All sharing options for: A One-of-a-Kind Habs Sweater 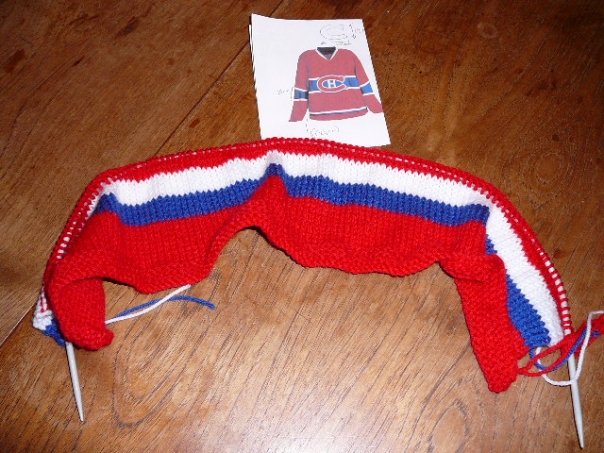 A week ago I received an e-mail from reader Bryan Driscoll, a Habs fan living out in Calgary, Alberta, who wanted to share a story with readers here about a fabulous looking home knit Canadiens sweater he had made for him. Agreeing with Bryan, I thought it a rather interesting subject for a post here, and replied asking for him to send me off some pictures detailing the sweater's progression.

What inspired Bryan to want a knit Canadiens sweater occured when he took in a game against the Avalanche at the Calgary Saddledome in October of 2007. There he'd seen a fan wearing a knit Flames sweater that he found awful cool. Although it looked somewhat smallish on the fan, perhaps due to age, Bryan immediately found himself desiring such a creation in Canadiens colours. 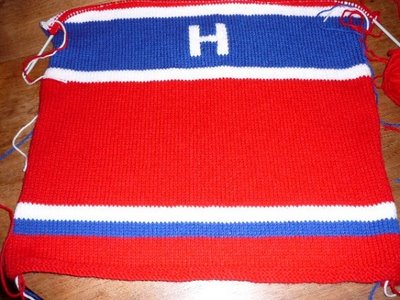 The day after the game, Bryan phoned his mother, who is a school teacher living in Ottawa, and told her exactly what he wanted for Christmas!

Through conversations between them, they decided to it would be a little hasty for her to attempt making the sweater without more imput from Bryan in person and they waited to begin the project until he headed back to Ottawa for the Christmas holidays to begin. Once back home, Bryan and his mother got down to the business of taking the proper sizings and measurements and they visited a wool and yarn store in Ottawa to pick out the exact shade of colours required. As luck sometimes goes, the store actually had a patern there for a Senators sweater, but no such thing for Habs fans. 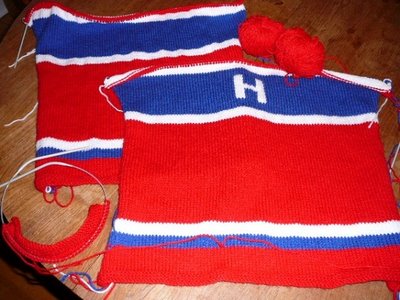 Bryan's mother then embarked on a three month journey of, as he puts it, "snags and snafus around every bend." Being a school teacher, Bryan's mother had to turn into a weekend warrior in order to have the project completed by the start of the playoffs. Sending photo's each week of the project's advancement, Bryan was anxious to see it's completion by playoff time, just in case Carey Price followed in Patrick Roy's footsteps and led the Canadiens all the way.

As the work was being done, Bryan found an NHL patch on E-Bay that he felt would look right in the front of the sweater's collar. He placed a bid on it and won, and as soon as it arrived he sent it off to Ottawa for inclusion on the sweater. 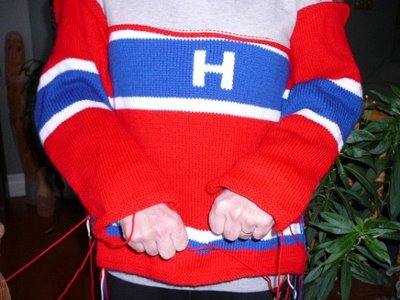 The first part of knitting the sweater had been going smoothly enough as the red, white, and blue horizontal stripes posed few problems for Bryan's mother. It was when she reached the Canadiens CH logo that certain issues came up. Realizing that it might not shape out properly once worn, she decided that beyond knitting the vertical and horizontal lines of the letter "H", the "C" part of the logo would look best if created separately and sewn as an additional layer above the "H" and stripes. In this manner, when the sweater was worn, the logo would keep its shape.

As photos from her work were sent to Calgary, Bryan became the envy of friends as he posted them on his facebook site for all to see. 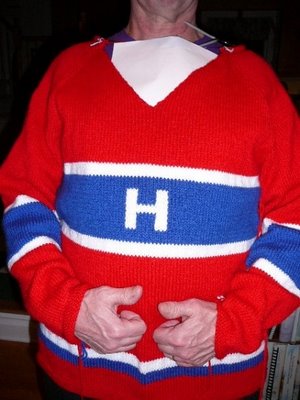 One final touch Bryan wished for had to wait. He wanted to have "Driscoll 22" sewn onto the back of the sweater, but it would mean waiting until after the playoffs for it's arrival. Bryan chose the number 22 for his fondness of Steve Begin, and for his age when he discovered his love for the Habs. There would be time to add that later, Bryan reasoned, and the finished sweater was sent out west, arriving just in time for the start of the playoffs. 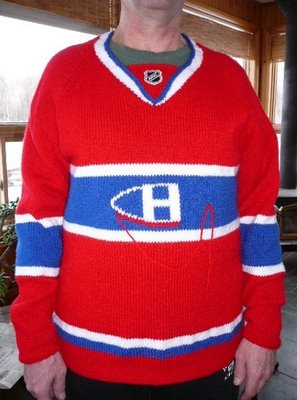 When the gift arrived for Bryan, witnessing first hand all of his mother's hard work, he could not believe that he was in possesion of something so original. He wore it to work the very next day and it was a big hit among his co-workers. Habs fans in Calgary are notorious for gathering at the Rose and Crown for games, and when Byan showed up there wearing his new knit Habs sweater, it quickly became the topic of conversastion.

Bryan is now trying to convince his mom to make a bunch more "one size fits all'' sweaters! 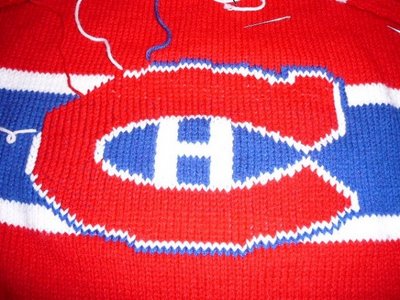 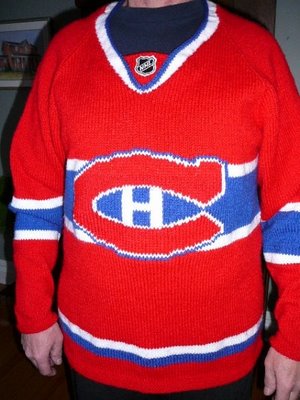 He has now sent the sweater back to Ottawa to have his name and number sewn onto the back.

Looking at the pictures shown of it here, I know what Bryan means when he terms it priceless.

That description could also apply to his mother.

Now I want one too! 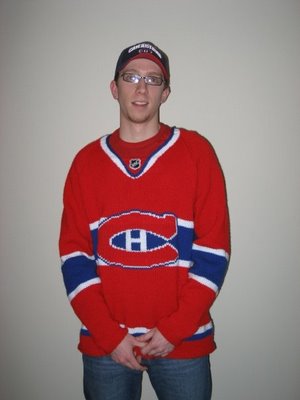