Share All sharing options for: Canadiens Took Big Steps In 2007-08 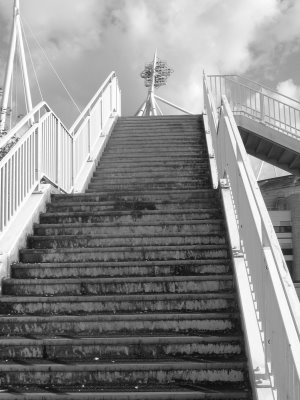 These words pretty much sum up the gamut of emotions I am feeling at the moment.

And it's damn hard to write all of this with the wound open fresh.

I have loved every minute of being a Canadiens fan this season. Though I am not happy with how this playoff has ended, I am as proud as I have been all season that the Montreal Canadiens have restored themselves among the better NHL teams. They made greater leaps than anyone imagined this season, and brought us fans an exciting brand of hockey along the way. The 2007-08 season has been a thrill ride.

I don't want to dwell much on Saturday's game or this particular series to any length. I'm not sure that time will allow me to have a better perspective or a deeper understanding or appreciation of what took place during five games. I have the same aftertaste that was left after the Carolina series in 2006.

I don't even feel as though the team that played best won.

I feel that the luckier of two teams won. The most opportune team won.

I'm not sure if I can give the Flyers credit for the accomplishment of upsetting the Habs, yet there is nothing that they have done to deserve removal of merit.

All I can say is that I have rarely seen a team capable of taking advantage of every break with such tenacity.

There are many good players on the Flyers that I have a newfound appreciation for, such as Richards, Timonen, and of course Umberger, who simply was a Habs killer in this round.

Martin Biron is the luckiest goaltender alive. There were just too many goalposts hit behind him, muffled open net chances by Montreal, and shots fired wide when he was out of position for me to buy into him as the reason the Canadiens summer is starting sooner than expected.

I'll never be sold on Daniel Briere either. A constant perimeter player, he's good, but nothing exceptional. Hardly worth the king's ransom he's being paid. There's a half dozen Habs I wouldn't trade for him even up. He would have never lasted in Montreal beyond a year or two. The expections that would have been impossible for him to meet would have turned him into Pierre "Pack My Bags" Turgeon as soon as the going got rough.

But enough about the frigging Flyers.

That pretty well covers why I am feeling upset, bitter, and stunned.

What is most disillusioning is the way hockey is officiated in 2008. I'm not going to run through a litany of blown calls - I'd be typing until sunup just to scratch the surface.

Hockey officials likely have the toughest job in all of sports. The game is too fast to be called the way it is presently. Too much is missed, misjudged, bumbled, and misrepresented.

During the lockout, fans were told that many issues had been addressed. I see no reflection of that whatsoever in the way the game is called. Hockey is light speed and officiating is neanderthal. The way things are set up, the team that commits the most subtle fouls that they can get away with is rewarded most.

It's a pity that it is this way, because it prevents the game from growing, both on and off the ice.

I know many casual fans who enjoy the sport who are turned off by an almost blatant inconsistency that often ruins the game. The NHL has often said that it wants to reward the faster, more skilled players. I don't see any evidence of that at all.

Now that I have gotten all that I've been holding back for some time, off my chest, it is time to look upon the reason why this site is here and why you are reading it.

Think back to how you felt about the Montreal Canadiens on opening night last October.

Now look at how far they have gone this season and much they have raised our hopes and dreams.

They made us totally silly with delight along the way.

No one expected this in October.

In the course of those seven elapsed months and 82 regular season games, the Canadiens constantly forced their fans, and the rest of the NHL, to consistently re-evaluate the team. As they climbed the echelons of the Eastern Conference and landed at the top, the Drive For 25 was launched full steam, filling up bandwagons bumper to bumper across the country.

They lit a fuse of enthusiams that captivated many, from the fanatic to the simply curious.

As the season wore on, the expectations went from a post season participation to a shot at the Stanley Cup final, and maybe, just maybe, a sip from mug number 25.

I was not entirely convinced that the Canadiens had the team to pull all this off, but we have all witnessed crazier things come playoff time.

In reassessing the team at the term of 82 games, I honestly felt that reaching the third round was this team's best destiny.

I still believe that is how far they could have gone at best.

It is not a failure that it didn't go farther, but it will be seen that way on radio, television and in print.

While there is value in such analysis, the truth lies closer inside the true fans hearts. What you have seen and felt this season, is no mere illusion. Do not let disappointment warp what you know is concrete.

This was but one year in the evolution of building what will be a great team not very far into the future. It will be stronger next season for certain.

Think about all that has gone right this year.

For starters, not only did Alex Kovalev rebound from a miserable year, he had several voices touting him as an MVP. Late in the season, with Saku Koivu absent, he wore the "C" for a stretch of games. That would have made fans wretch last season. Kovalev put up his second highest career totals and played more passionately than anyone has seen him do before. As I said to someone just a few days back, this season Alex Kovalev became a Montreal Canadien.

We lost our most exciting player from last season, Sheldon Souray, and the team didn't even bat an eyelash. The powerplay Souray once quarterbacked actually improved.

Tomas Plekanec developed into a top line center and is rounding out into a complete player that can be used in many game situations.

Saku Koivu looked to be on the decline, but the playoffs showed he is still the Habs fiercest competitor.

Andrei Markov signed the biggest contract in Canadiens history during the off season, and no one was ever heard complaining that he wasn't earning it. He was obviously slowed in the playoffs by an injury which we will surely hear about in coming days.

His partner Mike Komisarek was likely not playing at 100% either but this season made the jump from a player of great promise into a veteran leader who will continue to improve.

Carey Price was almost everything he was billed as. He was given the team to lead and fared well as the Canadiens rode his strong play during the final month of the year. The likeable youngster will suffer the wrath of some very harsh critics in coming days. The hype for Price was insane, and anything short of a Stanley Cup would have been seen a failure. Through a busy 16 months and close to 100 games of hockey, he must be one pooped out young man. Some of the strangest goals ever found their way by him this spring. Many will now question the trading away of Cristobal Huet more incisively than before. That's hindsight. Price has a lot to take with him from his first NHL season, and only good things can come from it.

In front of Price, there are a talented bunch of kids just getting their feet wet in the NHL, starting with the Kostitsyn brothers. You can just see that this pair oozes potential. I believe they will become ridiculously good in a couple of years.

Next season, all these elements and others will be a whole season smarter and more experienced. The team has gained greatly in so many areas and the bitterness of this playoff disappointment will translate itself into character and conviction by next year.

There will be opinions that the Canadiens first overachieved before falling back to earth.

Some will flatly suggest that the Habs were not this good to start with.

You will also probably hear more than a few folks who think they underachieved, or got overconfident, or even choked in the end.

I believe that what occured with the Canadiens all season long, and in the end, is exactly what should have played out.

This is a young group coming together and still being built. They ended up where they have, because this is what they were in sum. As fans, our evaluations of the team were all over the place - built from hopes, dreams, and in Montreal - past templates.

Today, there are only six teams left playing hockey. Last season, on the aftremath of their final game, sixteen teams for left.

What happened in the Philadelphia series was not accidental. Teams that often make great leaps in one season usually hit a plateau.

The Pittsburgh Penguins made great strides last season before going as far as they could.

This season they are better armed. 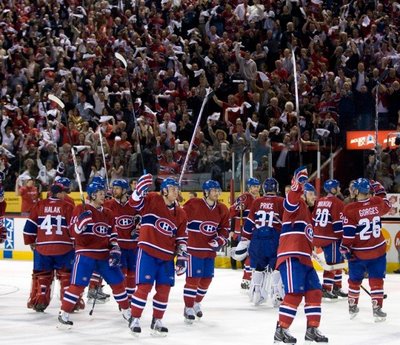 For now, as the curtain draws on this most exciting of years, I will be taking a little vacation from working on the site. I am beginning a new job Monday and that will be retaining my focus for a bit. I'll have some time to watch my other preferred original six team that wears red go for the big silver mug. After a little breath, I'll get back on here and cover the summer's events that concern the Habs leading up to next season. I doubt I'll feel like doing another post mortem on the team anytime soon. I have certain projects in mind for this site for next season and I will be working on those until October.

I'd like to take this time to thank you readers for tuning in in great numbers this season. It's been a pleasure writing for you all and exchanging comments with some of you. Eyes On The Prize hit 33,000 readers in April - overwhelmed is the only word I feel. Many of you had some very kind words and thoughts to send my way during the season and I'm always pretty freaked out to hear about what this space means to people. It's a warm place you all put me in.

When October grows near, the "Habs For Breakfast" links will return. I hope that during the summer, you will all continue tuning into the great Canadiens blogs that I've made a habit of linking to almost daily.

There are some incredible writers sharing insightful thoughts on the Canadiens out there. I think of them as my six pack for all things Habs. They are: Lions In Winter, Theory Of Ice, Four Habs Fans, The H Does Not Stand For Habs, Dennis Kane's Excellent Montreal Canadiens Blog, and the two who allow me to reach many more of you, Habs Inside Out and Habs World. keep checking them out. I know I will be.

Have a great summer.