Begin Not To Blame For Game 4 Loss

Share All sharing options for: Begin Not To Blame For Game 4 Loss 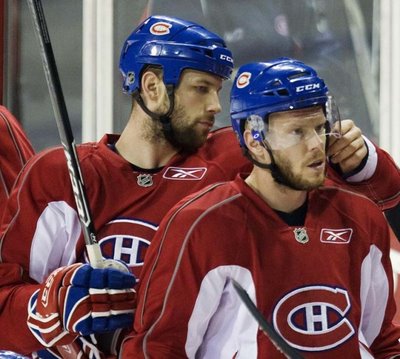 Canadiens forward Steve Begin was unconsolable after taking the late Game 4 penalty that led to the Flyers winning goal.

He was not available to the media immediatly after the game.

Begin is a player of an emotional nature who will do anything it takes to win. Just minutes prior to his penalty, he took a point shot straight in the gut looking much like a front line soldier gunned down on a battlefield. I have always referred to Begin as the Habs captain without a letter, and he is exactly the type of forward a team needs to have on the ice in crucial moments such the one in Game 4.

While he may not have enjoyed a 20 goal season since prior to playing junior in the QMJHL, he knows what it takes to win. The Calgary Flames made Begin their second choice, 40th overall in the 1996 draft, after a season of 13 goals and 218 penalty minutes with Val d' Or Foreurs. Five seasons later, Begin scored 10 goals in 19 playoff games for the Saint John Flames and was named the MVP for the Calder Cup winners.

With a player a Begin's nature, who hits anything in his path, there is always a risk that his enthusiam will get the better of his common sense.

The penalty he took late in game 4 has been termed "stupid" in several print stories.

It may have been untimely, and regrettable, but I saw it as anything but stupid. 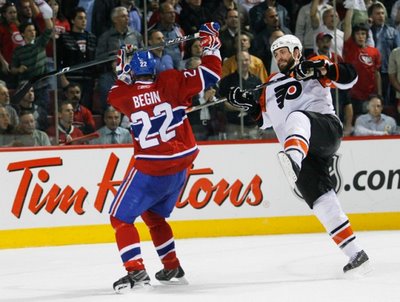 In a game where so many similar calls away from the play are ignored for that reason, many folks are wondering why this infraction was singled out at this particular time when it had absolutely no bearing on the play in progress.

It is a question we aren't likely to hear an answer for anytime soon.

One question I have heard is, what exactly did begin think he was doing when he hit Sami Kapanen?

From the angle that I saw it from initially, I felt that Kapanen was lingering a second too long between Begin and the open door to the Canadiens bench while the Habs were in the midst of a line change. Opposition players are often seen running all kinds of subtle interference - like a basketball pick play - and doing such near an opponents open bench door during changes has always been an effective ploy in getting a too many men on the ice call.

In that case, a referee could have called both players for infractions - Begin for the hit, and Kapanen for interference or obstruction for getting in Begin's way at the door.

Having watched the game three times in total - twice on the RDS Express - it looks less like Begin was only concerned with coming off the ice. He was also finishing a check after a Kapanen dump in.

I found this clip, from a different angle, on the TSN website. Nearing the 1:40 mark of the clip, the Begin penalty plays. You can see Tomas Plekanec, who is not a linemate of Begin's in the play. Between Kapanen backhanding the puck into the Canadiens zone and Begin throwing a shoulder into him, there is about 1.7 seconds of elapsed time.

That cannot be called a late hit. It cannot be viewed as a hit on a player who didn't have possesion of the puck. There was no elbow or high stick involved in the hit. Other than the compromising open door, which is awaiting Begin. Begin is in fact exactly where he ought to be, already in stride, and simply finishing a check as he has done all series long.

Bruntly, this isn't even a penalty on opening night in October, nevermind the playoffs. 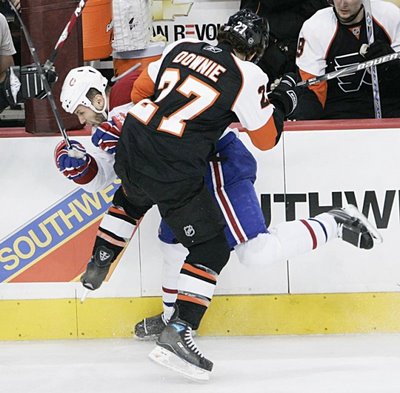 The NHL and its officials never go on record as saying they call the playoffs any differently. They invoke player adjustment to the rules whenever the number of called infractions dropping comes into question. While skating around the admission that officials call things the same, they also give creedence to the notion that the officials take into consideration that they do not want to make a borderline call that affects the game's outcome.

It is almost akin to speaking out of both corners of the mouth at once.

More often than not, the calls they fail to make affect the outcome of games more drastically than what is called.

The intensity of playoff hockey is upped several degrees from regular season play. There are triple the amount of calls that could be made if the rulebook was followed to a point with any consistency. As hockey fans, we do not want it any other way in terms of how the players approach the heightened action. Additional judgement by officials on calls away from the play is required to assess their importance in the grander scheme.

That's all fine and good, but mere days after word from the league stated that they sought to avoid calls on inconsequential plays that did not affect the outcome of games, the Begin call goes in the absolute opposite direction. This call gave the Flyers an opportunity to win the game at the most crucial of moments and made Begin a goat in the process.

I'm not here to whine about the officiating - I could do that for 82 games a year in all honesty, and so could the fans of 29 other teams. Nothing can be changed about Wednesday's game and alot of it should be forgotten by the drop of the puck on Saturday.

I find it terrible that Steve Begin feels he cost the Canadiens a chance at winning game 4.

I find it equally absurd that he is being pointed out and his actions termed "stupid".

The Canadiens have lost the last three games for a litany of incomprehensible reasons that only time and understanding will give a proper perspective to.

The Steve Begin I've always known and appreciated is the one I'm hoping shows up for game 5.

The Canadiens are going to need his game, risks and all.
.