Was Habs KO Win Over Flyers A Ghostly Voodoo Thing?

Share All sharing options for: Was Habs KO Win Over Flyers A Ghostly Voodoo Thing? 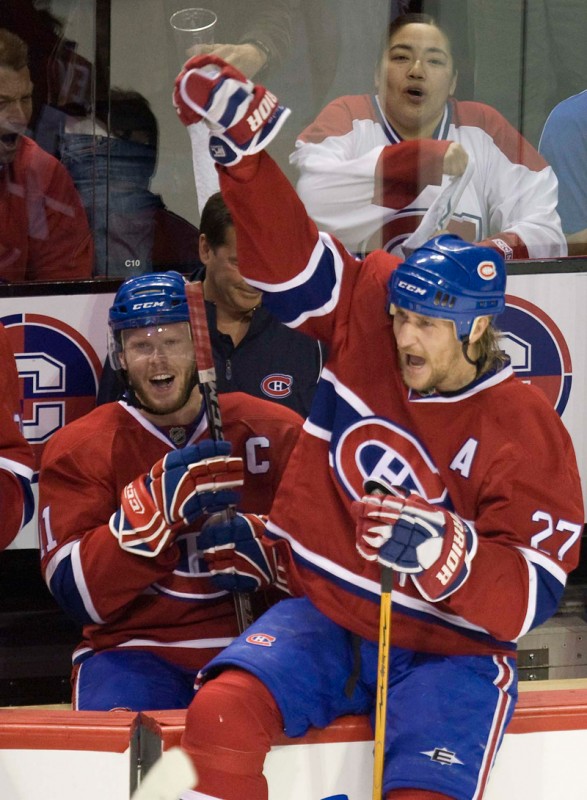 I like the insinuation the letters K and O have - Knock Out - as in knockout punch!

What follows here, is just some simple fun with letters, numbers, and coincidence, which may or may not mean a whole lot in the grand scheme of things. I guess that is for readers to decide.

Here's a little segueway into why things that weird me out are captivating my attention lately.

Truthfully, I don't put a whole lot of stock or faith into such things as karma and luck. Things happen by coincidence and I figure that's it and that's all when it comes to those weirdities. Like 15 years ago when I found a rusted horseshoe and nailed it to my shed door and won big money in different forms for three straight days.

Like my father in law asking me to pick him up after he has dropped his car off at a garage just two days ago for only the third time since I married his daughter 16 years ago, and along the way getting a traffic violation ticket each time.

Like yesterday, when I rose from the throne thinking about a friend I hadn't seen in months and walking downstairs only to see him walking up the front steps to my house.

Faith healers are money grabbers. Fortune tellers are transparent flakes. Snake oil is the sister of greed is the mother of invention is the root of all evil.

In short, I don't buy anything I cannot logically understand. But like many people, I allow the questions regarding coincidence to captivate me once in a while. 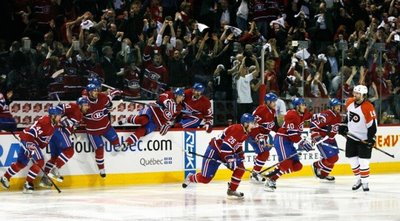 Now back to last night's game.

The KO's dominanted the entirety of the scoresheet in the win over the Flyers from start to finish.

After the Flyers were up 2 zip, the Habs Andrei KO misses on a penalty shot, but redeems himself by scoring the Canadiens first goal, assisted by Sergei KO.

Sergei KO then takes a penalty, followed by Mike KO, and while he was in the box, Alex KO tied the game, assisted by Tomas Plekanec, whose name doesn't start with, but whose full name includes, the letters K and O.

With a little less than 2 minutes to go in the second period, Mike KO visits the sin bin once more, and the Flyers scored the go ahead goal early in the third at the 19 second mark.

Alex KO tied the game up with 29 seconds left, assisted by Saku KO.

Meanwhile, I'm noticing all of these KO's while checking NHL.com between periods for goals and assists because I'm in a hockey pool (which also includes the letters K and O), and I see that there is still one KO to go. 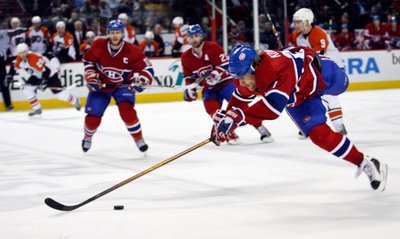 I always have fun with things like this but it's usually to do with numbers.

Things like the KO brothers, Sergei and Andrei scoring the first two goals of the Bruins series 2:02 into game 1, and the bookending the series by each scoring in the final 2:02 of game 7.

That's kinda deja voodoo weird when you thing about it!

The goal scorers for the Canadiens in game 1 against Boston were Sergei KO, Andrei KO, Tommy KO, and Bryan SmOlinsKi. Three other types of KO's figured in on the assists, and Mike KO had 2 penalties in that game as well, with the other going to Andrei MarKOv.

In game 7 against the Bruins, other than the KO brothers scoring - 2 for Andrei KO, 1 for Sergei KO - things got started with a rare goal by Mike KO.

I'm not sure if there is a word for the coincidence of letters turning up timely and appropriately - maybe it's synchroalphabeticism or something - but it can't be any weirder than all that numerology stuff. 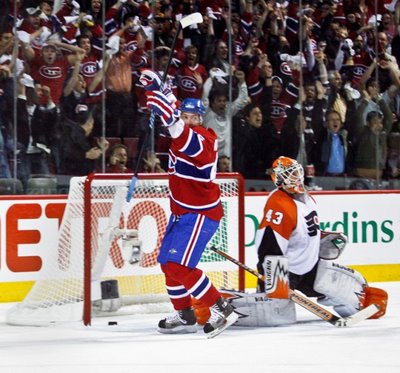 Last night, the Canadiens scored their first two goals at the 9 and 16 minute marks of the the second period. Not exactly on :00 minute mark, but I digress.

9 and 16 are the numbers belonging to the great Richard brothers, hung high in the rafters of the Bell Centre. So you could believe that a theme has presented itself - scoring goals in the number minute's of retired jersey numbers.

The Flyers scored their third period go ahead goal, that should never have counted to start with, at the 19 second mark. Now 19 is Larry Robinson's number, which of course hangs alongside the Richards numbers up by that hallowed ceiling under which the Flyers are about to be doomed.

Larry Robinson scored his first career playoff goal, and I believe only overtime goal against the Flyers in 1973.

Late in the 3rd period, with Carey Price, who wears number 31, sitting on the bench, the Canadiens even the score.

Last two numbers hung to the rafters prior to current GM Bob Gainey's 23. Robinson's and Dryden's.

And some say the ghosts haven't moved from the Forum to the Bell!

Now who just happened to wear that jersey number in this game. Well, none other than the Flyers Daniel Briere, who shunned the Habs off season free agent offer to him because he felt Philly were a stronger team.

What is it they sometimes say payback is?

Now I have mentioned Dryden and Price's jersey numbers in all this weirdness, but not Patrick Roy's.

Price has been compared to both these Hall Of Fame netminders, an almost unfair burden considering the expectations heaped upon him.

Carey Price could have been handed any goalie type number, such as 30 or 35, but he accepted the 31 he was handed at first training camp two seasons ago.

That's enough weird for me in one day.