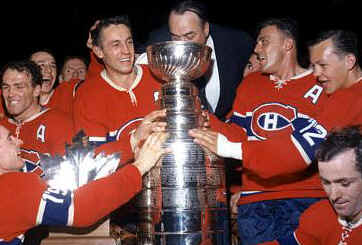 By chance that you haven't visited the Fan Zone section of Montreal canadiens.com in the last few days, the team is asking fans to vote for 10 of 15 classic Habs games for a souvenir DVD being assembled for the 100th anniversary celebrations.

After selecting the 10 games prefered, type in "Forum" under the hint word, and enter you personal coordinates for a chance to win. The weekly clues can be heard on CHOM 97.7, CJAD 800, and MIX 96 in Montreal.

The 15 games include, in chronological order: 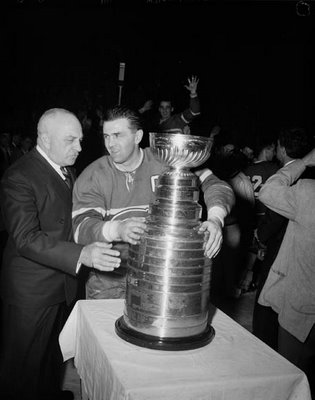 Short clips of each game can be viewed in the Fan Zone and voting ends on May 4.

I voted even though I am ineligible to win the contest - bummer! Contests should be open to fans everywhere, but governments and prize laws like to screw things up.

You may note five asterisks above - those were the games I chose not to vote for to be on the DVD set. It's quite a tough choice actually, and I took me a good while to figure out which I'd most want to see repeatedly.

Everyone has their opinions, but I've always felt the so called "Greatest Hockey Game Ever Played" was to me the most one sided game in which the home team goalie sucked out and cost his team a classic win. I almost included it, but the "Saku's Return" game edged it out in my heart.

Maybe I speak for a few of the older fans when I lament the absence of the Habs and Bruins tilt in 1971, where they came back from a 5-2 deficit to stun the Bruins 7-5. Later that same playoff year, in game 7 of the finals, Chicago was leading 2-0 when the Pocket Rocket unleashed his heroics and the Habs won 3-2 for their 16th Cup.

There must not have been much vintage 1950's Habs footage preserved in good quality as they are only offering the one game in the contest, which incidentally turned out to be Rocket Richard's final game.

I'm certain that other clips of incomplete games and greatest moments would be included in the set, with film of going back to the earliest era's of Canadiens hockey.

Possibly, could there be an added bonus disc? Maybe that 25th Cup that is on the line this spring?