Time For The Canadiens To Be Road Rats

Share All sharing options for: Time For The Canadiens To Be Road Rats 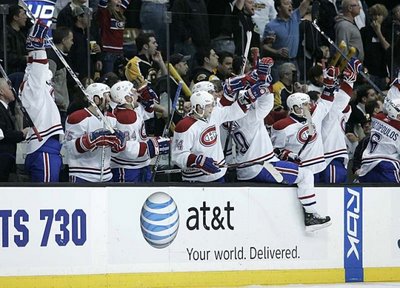 Hey, when it gets down to old school rock song analogies and quoting Alice Cooper lyrics, it could have been a whole lot worse turning to "Billion Dollar Babies", "Under My Wheels" or God help us.... "School's Out"!

The bottom line is, having been stretched to a sixth game by the Bruins in this series, the Canadiens really do need to play the role of road rats to take this series and finish Boston off. The comfort of a seventh game in Montreal should never enter the player's minds.

This season, the Canadiens have made great strides by being a more accomplished team on the road.

The players on the Habs are accustomed to gearing their focus properly away from the euphoric distractions of the Bell Centre masses, and should be able to concentrate on nullifying what the Bruins put forth as a game plan in their own rink. The Canadiens have defeated Boston no less than five times this season in front of their own fans and it is time to regain that same unified perspective.

Unified. Together. As a pack of road rats.

This is not a time for the Canadiens to recall that 13 game win streak over the Bruins.

It is not a time to believe that the league's best power play will finally find it's claws.

It would be an ill advised moment to take comfort in Carey Price's record of wins coming after losses.

Team confidence ought to play a role. For the Canadiens to be counting on it too much before the puck is dropped could be fatal. 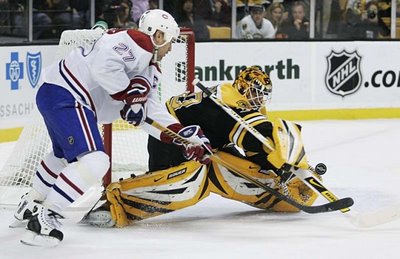 Every single favorable stat is out the window this time of year, but the Candiens should build assurance and confidence in knowing that they have the tools and mental fortitude to win on the road.

And now, more than ever, it is time to play in a road game frame of mind. Especially after an inoffensive Bruins team is coming off a 5 goal performance.

The idea would be to kill the Bruins with a frustratingly patient game in front of their home crowd. Being within a game of clinching a series win did little to calm the Canadiens down in Montreal on Thursday. Perhaps being away from the hometown euphoria will help.

Montreal put it all together with a road rat mentality in Game 4 when the Bruins could have evened the series. The consequences have heightened but the plan remains the same. Win this game one shift at a time.

Being road rats in Boston for the Canadiens on Saturday involves a greater discipline, faith in team mates, respect of a game plan, and a focus on one's own individual role. The Habs must understand that this will not be a game won in the first 20 minutes, and by all likelyhood not won in the final 20 minutes of the game.

Approaching it any other way is shortsighted.

The longer the game goes on, scoreless or tied, the better the Canadiens chances of winning.
The Habs are a very young squad in experience, and this contest will serve them for years, win or lose. Lessons aplenty are about to be learned. No matter what the result of this series brings, it will translate into experience.

The Canadiens work on the road this season has led to their first place conference standing.
It is time for the team to draw upon that different mentality.

The moment is upon them, and the coach's ability to translate the seriousness of the situation, the veteran's ability to convey to the youth that tomorrow's cannot be trusted, and the younger players own leadership traits and winner qualities will all be under the microscope in Game 6.

Do the Canadiens have the poise, determination and killer instinct of a rat?

We will have the answer after Game 6.
.