This Is Where "Team Toughness" Gets Its Biggest Test

Share All sharing options for: This Is Where "Team Toughness" Gets Its Biggest Test 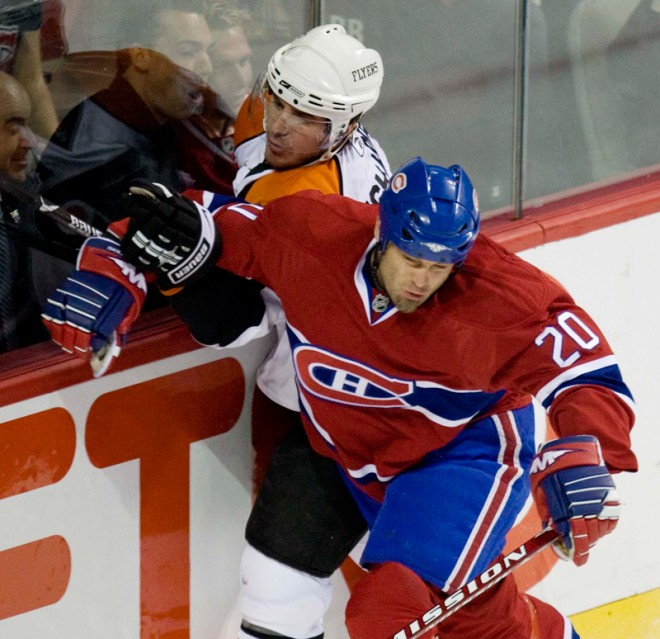 Earlier in the season, a question was brought up to Canadiens coach Guy Carbonneau, regarding the Habs lack of designated pugilist, someone who would set the opposition straight when games got out of hand.

Three players who filled the role to different extents last season, Aaron Downey, Garth Murray, and Sheldon Souray, were now gone, and the thinking was that the soft and small Canadiens would be pushed around more than ever before.

It must be stated that while the three players named were often willing to throw punches for team mates, none were highly effective in the role. Downey and Murray scared no one while contributing little in hockey terms, and Souray was so important in the team's grand scheme of things last season that he was well advised to choose his spots.

He made his point by stating that the Canadiens were a team who planned to roll four steady lines, and that adding a player whose role would be minimal did not fit into his plans.

Of course, had their been a 10 goal scorer available, who struck fear into opponents eyes, and had the ability to backcheck with regularity, the Canadiens would have jumped on him.

As is the case with any rare commodity in demand, players of the like simply aren't running the streets. Carbonneau wasn't about wish for the addition of a player whose contribution to the team would involved less than 10 minutes of ice time.

Smartly, and with little other choice, Carbonneau called for "team toughness' when the going got rough. 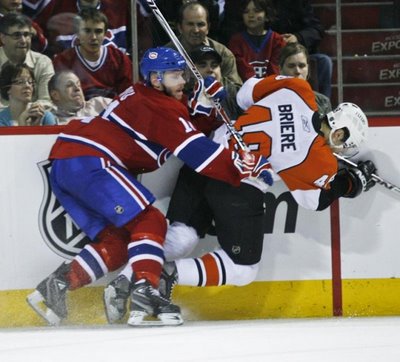 Many onlookers felt it a naive choice of terms for Carbonneau to preach considering the elements of the Canadiens lineup, seen by many as being receivers rather than givers when it comes to wrath unleashed.

It is often misinterpreted, the distinction between toughness and having a player who can drop the gloves in each game. This Canadiens team, despite outside perceptions to the contrary, has fared exceptionally at policing themselves when they had to. Surprisingly, the Canadiens managed to take care of their own business when it came to the rough stuff with all the ease of a backhand swipe.

With no goon in sight, and few players to drop the gloves along the way, "Team Toughness" climbed the standings ladder all the way to a first place finish.

The question never came back to Carbonneau, and an opportunity for him to shout vindication on the issue has never presented itself.

Backtracking to when the question was originally posed, several queries pointed to a stage in the post season that the Canadiens actually find themselves in at the moment, wherein that team toughness will be put to the test.

What Carbonneau has preached to his players all season long has worked until now. It may or may not continue to work beyond Game 3.

The Canadiens players must continue to be willing to take hits, slashes, facewashes, and crosschecks to the head with selective retaliation. That is part of the mental toughness required in this type of battle.

The players must also continue to dish out the same in return with unleashed fervor and passion. They will not be backed down by the Flyers, even in their building, but this series will be about who wears down the other first.

Team mates will continue to stand up for each other when called on, but discipline will be important as officiating continues to be consistantly inconsistant with what is called from game to game, period to period. 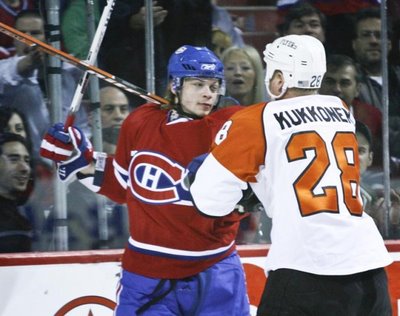 Tom Kostopoulos chose a fair time for his wires to cross in Game 2, when it could not cost the team much. Doing such a thing at an earlier time in the game could cause a major turning point on the road to a loss.

All Canadiens players, regardless of size must continue to drive hard to the net, dish out the big hits when it is feasible and smart, and proceed to the corners and boards where taking those hits often makes a play successful. They must be relentless in their pursuit of this kind of dedication.
The Kostitsyn's, Saku Koivu, Chris Higgins and Max Lapierre are all playing this way. Tomas Plekanec, Alex Kovalev, Mark Streit, and Mathieu Dandeneault are picking their spots and it has to stop. Some players need reminding that the shortest distance between two points is a straight line, with and without the puck.

The Begin, Smolinski, and Kostopoulos trio are wrecking balls whose intensity never drops. They have been role models of fortitude and their success testifies for the unquenched committment in their game.

Saturday's loss to the Flyers sacrificed home ice in the series. The Canadiens need the win tonight to assure they can head back home no worse that tied at two game.

The players mentioned above who are choosing their spots and avoiding what is inevitable must understand that they are about to play two roads game. They must be prepared to do battle in the trenches they have so far been unwilling to venture into.

Tonight's game will come down how badly certain players want to win the Stanley Cup. 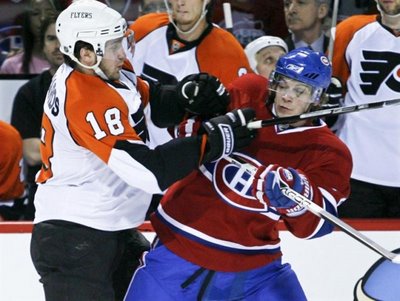