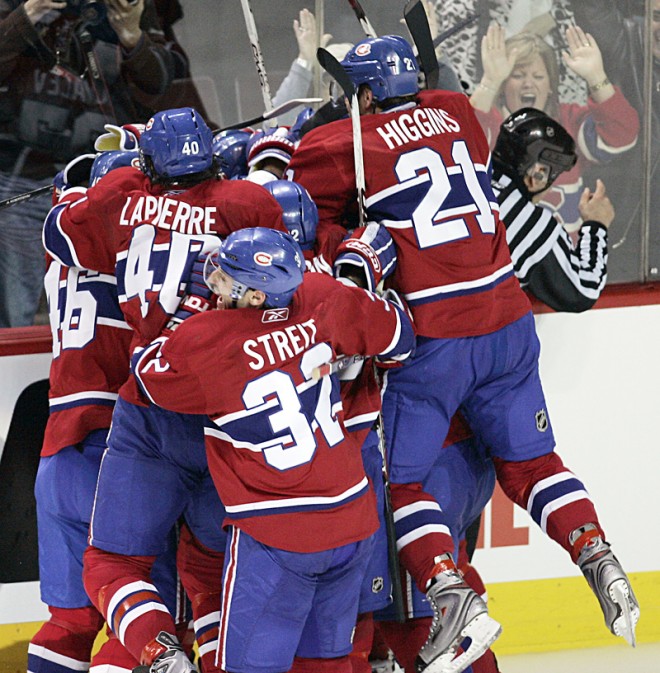 There are many elements a team needs to win come playoff time, and you will often hear extolled the virtues of timely scoring, lucky breaks and bounces, and goaltending so solid it steals the occasional game.

Both teams profited from timely breaks in this game, and it could be said that Montreal simply had the last good break.

A team would be wise not to count on such things happening on a consistant basis, and focus and apply the virtues of hard work instead.

In game two, the Canadiens took a foot off the pedal slightly, and might have cost them had they not had certain things come their way. They did just enough of these things right to edge the Bruins, but they also took their gaze of what worked best for them in game one.

As could have been expected, and to some degree it was, the Bruins came out much hungrier in the second game. I'd guess that getting beyond the five minute mark of the game without being behind on the scoreboard would constitute some sort of moral boost to the Bruins. From then on, and even after falling behind by two goals, they continued whittling away at the Canadiens until their efforts created their own lucky breaks.

I was a little concerned while watching the Habs chasing their tails for a few precarious moments in the third period. Montreal were up two goals, but Boston had controlled more of this game by that point. A pair of discipline and soft play boobs later, and the score was tied. 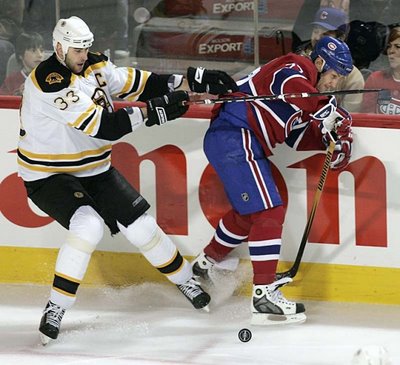 Oddly enough, once Boston finally managed to work all the way up to knotting the game, their worst side reared itself again and it bit them where it hurt most.

Despite the Habs not giving their most inspired performance in game, a silver lining emerges from this close call. Had they lost and headed to Boston with a win apiece, the series would have been anybody's to win. Now a Boston team that has not found a way to beat montreal in 13 straight contests are now faced with the trying task of having to pull off the trick in four of the next five games, if the series lasts that long.

There's one notion that should never be cast aside or forgotten about this edition of the Habs - and that is how young and inexperienced it is.

It will not win a Stanley Cup without first learning to face and deal with adversity.

The young Habs ought to have learned a few things about themselves from game two. The silver lining is that it cost them nothing. A free lesson courtesy of the Boston Bruins.

Teams often learn to win through losing. Winning erases the focus on all kinds of small details and little things gone wrong, wheras losing magnifies those mistakes and concentration lapses.

The good news is that with another game today, the Canadiens have as littler time as do the Bruins for studying what failed to work. 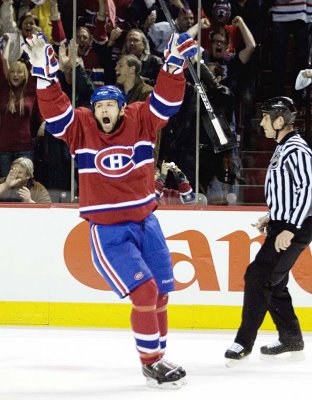 There is a danger with a young team becoming overconfident in victory.

Don't get me wrong, confidence is always a good thing. But with such a young team, a fear of losing, and the lessons learned from it, also has it's worth.

Possibly gone unnoticed in all the playoff frenzy is that the Canadiens have now won 5 games in a row for the first time this season. That's nine wins in their last ten games, or an overall record of 16-5 since the trade deadline, for those who put stock in such things.

Being hot and on a roll at the right time of the year is all good, but again, and eye must be kept on the things winning masks.

I'll be curiously watching to see if Guy Carbonneau makes any lineup adjustments for game 3, because staying the course with same players might invite complacency after an average performance by the team. Don't be surprised to see Ryan O' Byrne inserted into the lineup with either Mark Streit moving up from defense, or Patrice Brisebois sitting one out.

This thought is not to fault either player particularly, but the entirety of the Habs game of speed is very dependant on it's transition game. Where the Bruins found success tonight, was in exploiting the defence pairings.

Roman Hamrlik was so effective on Thursday, that the Bruins steered clear of him and worked on Brisebois enough to wear him down. Josh Gorges is used to working with the stay at home Francis Bouillon, and not with the rushing, chance taking Streit. 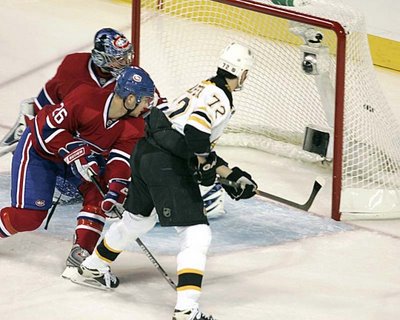 The buffer in sheltering the Habs errors in this win was Carey Price. In his first two NHL playoff games, Price has given up 3 goals on 57 shots. In game 1, he was beaten by a deflection less than ten feet in front of him, when two sticks dropped in front of him, with one causing the changeup that dribbled through his pads. In game two, Price was beaten on a rebound that changed direction on Gorges stick, and another on a 5 on 3 powerplay, where only Gumby could have stretched out wide enough to make the save.

Game two's first star was also it's biggest burglar. He has yet to be beaten on a shot that he should have stopped, and has been positionally sound enough to stop some he has had no business seeing. I cannot recall too many teams that have gone deep into springtime hockey where a goalie didn't rob opponents of a win or two or ten.

In fact, Price has been so focused and dependable that the team in front of him may soon begin to take his night's work for granted.

That would be playing with fire!

Looking 180 feet down ice, should the Canadiens continue to expect Tim Thomas to give up 40 footers to Roman Hamrlik, rebounds to Sergei Kostitsyn, and narrow angle shots to Alex Kovalev?

Expecting what has happened in two games in Montreal to become deja vu in Boston is unrealistic. The game three scenario will be a totally different one.

Perhaps it will be a chance for more lessons to be learned by these young Canadiens - lose or win.

And this young team has to profit from all the lessons in can get. As Bob Gainey put it, for many of them, this is Playoffs 101. Study hard - and no cheating!