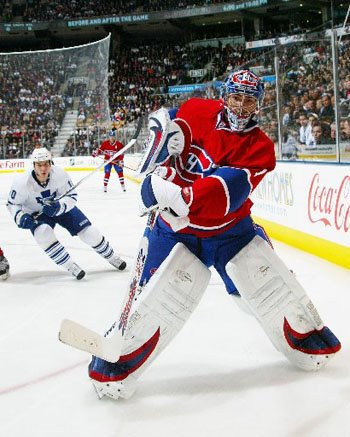 Robert L Note: Of all the Canadian Press media scribes who cover sports, Pierre LeBrun has always been of the fairest in his assessments of the Montreal Canadiens over the years. His criticisms and his general awareness of the Habs has always gone beyond the usual surface glances and delved into the actual heart and psyche of the team. This reprint of his Sportsnet column shows he knows what's going on.

I've gone on record a few times saying I don't think the Canadiens have enough experience to go deep into the playoffs. And yet, I've got an unshakable feeling about this team ...

First Calgary, then Edmonton and last spring it was Ottawa. Will the Montreal Canadiens be the fourth consecutive Canadian team to reach the Stanley Cup final?

I've gone on record a few times on Hockeycentral saying I don't think the Canadiens have enough experience to go deep into the playoffs. And yet, I've got this unshakable feeling about this team ... like something special is going on here.

First of all, the Eastern Conference is wide open. There is no San Jose or Anaheim or Detroit in the East. Just a bunch of good teams. There isn't a team in the East where if Montreal beat them in the playoffs you would call it an actual upset.

Then you've got this rookie goaltender Carey Price, who seems to fight off a yawn at the most critical moment of a game. He's that calm. You saw it with his world junior hockey performance and last spring with an AHL playoff MVP award, Price is as cool as a cucumber.

The blue line is underrated. We all know about Andrei Markov, Mark Streit, Mike Komisarek and veteran Roman Hamrlik, but lesser names such as Francis Bouillon and Josh Gorges are solid performers. Rookie Ryan O' Byrne is a keeper. 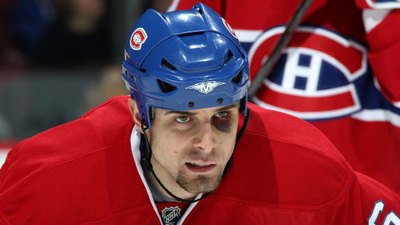 A possessed Alexei Kovalev is the difference maker up front. He's taken the team on his shoulders this season with his inspired play, so much so that he's garnering some attention as a potential Hart Trophy candidate. He sounds even hungrier heading into the playoffs.


The skilled and speedy Montreal attack is hard to handle because it has more than one line. No doubt Kovalev's top unit with Tomas Plekanec and Andrei Kostitsyn is the most dangerous and consistent producer, but there are other waves. Saku Koivu (when healthy again), Christopher Higgins, Michael Ryder, Sergei Kostitsyn, Mikhail Grabovski and Guillaume Latendresse also chip in offensively.


Montreal also carries the top-rated power play in the NHL into the playoffs but perhaps just as importantly has improved on a penalty kill that was ranked near the bottom for most of the season. Now they're middle of the pack, really buckling down over the last month. That's a good sign for the Canadiens. 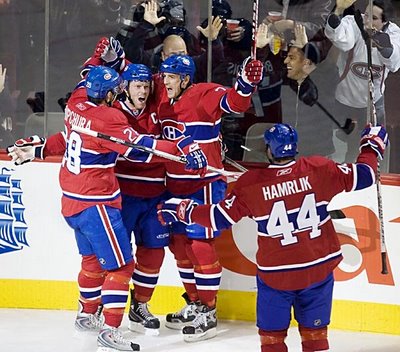 Montreal also carries the top-rated power play in the NHL into the playoffs but perhaps just as importantly has improved on a penalty kill that was ranked near the bottom for most of the season. Now they're middle of the pack, really buckling down over the last month. That's a good sign for the Canadiens.


Even strength scoring has also improved. Last season, despite the best power play in the NHL, the Habs ranked 27th in the league in five-on-five scoring and that really hurt them down the stretch as they missed the playoffs on the final weekend. As of Thursday afternoon they were 10th in the NHL in that department, a dramatic improvement that will prove valuable late in playoff games where perhaps the whistles are put away and that the only way to prevail is at equal strength.


Are the Habs too soft? That's one criticism levied at them by a NHL GM who requested anonymity. But how much will that be a factor in the East? It certainly wouldn't be against Pittsburgh in a potential Eastern Conference final. There, you're talking skill-on-skill.


You might argue Boston is among the toughest teams out there. A lot that did for the Bruins against the Canadiens this season, the Habs, as most hockey fans know, going 8-0-0 against Boston this season.

Impossible to know at this point. The only thing we do know is that the Bell Centre will be shaking with excitement next week. And it's hard to ignore the feeling that the party will last for more than a week.