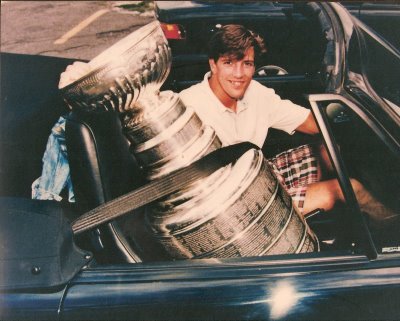 I've never been a charter member of the Patrice Brisebois fanclub, far from it. It's not easy to convert me, either. It's hard for me to put my finger on exactly why this is. He's has always left me indifferent to much of what he does on the ice. That's always one of the first words that comes to mind when I think of Brisebois - indifferent!

When Brisebois scored last night what would become the eventual contest winner in game 3, a little thought came to me.

"Oh no, am I going to have to write about Brisebois now?", I silently dreaded.

I was hoping for the remainder of the game that the Habs would add a couple more in the third, or that Claude Julien's forehead would pop a vein in anger making him look like a bipolar Hulked out Humpty Dumpty and give me something else to write about than Patrice.

I'ts not that I dislike Brisebois - he has many likeable traits - it is that I cannot love the notion of Brisebois as a Montreal Canadien. Somewhere else should be there, you know.

Heck, here's a guy who has spent 15 seasons donning the CH and has won a Stanley Cup with the Habs in 93. I ought to have some appreciation for what he brings.

But no, empty is all he has ever left me. 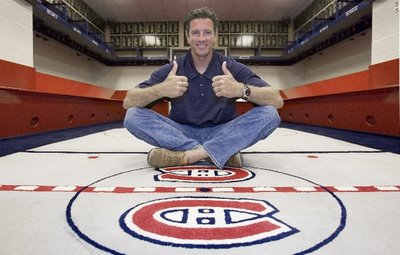 When Bob Gainey brought Brisebois back to Montreal as a free agent at the beginning of this season after having bought out his contract two seasons ago I was baffled by the move.

I understood it, as a depth move. I kinda got the experience thing. The former Hab angle, that would have mattered more to me had it been another player, say Mark Recchi.

At first when I heard the news, I thought it was a joke. A friend of mine who likes to get my Habs colours in a twist, approached me last summer: "Guess who the the Habs signed today? Brisboihahahaha!"

Patrice, the booed one, the bought out one, the Paris midseason vacation one? Come on, Bob, what's up?

When this season began, there was Brisebois dressed and in the lineup when many felt other players belonged there more. He started off doing okay, but then the old visions of him came tauntingly back into his game. Pucks hopping over his stick at the blueline on the PP, pinching when he shouldn't be and causing two on one's, and the always predictable getting beat to the outside where a veteran defenseman should be strongest.

Soon enough, with the steadying of Josh Gorges, a healthy Francis Bouillon, and the call up of Ryan O' Byrne, Brisebois was back where most were most comfortable with him - in the pressbox.

As the regular season wore on, and the Habs climbed in the standings, Brisebois became an afterthought of sorts until injuries hit Francis Bouillon and Mike Komisarek and the Canadiens needed his services in the final games.

The playoffs began, and to everyone's surprise, Ryan O'Byrne is sitting out, and Brisebois is dressed. My dread was reborn. 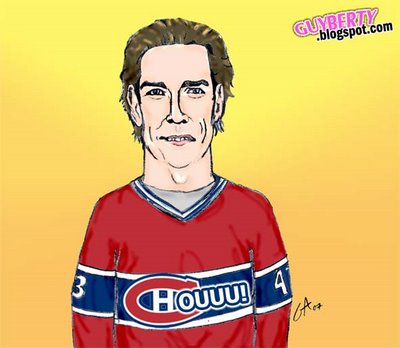 Did you ever get the impression that if Bob Gainey and Carbonneau were baseball pitchers, that they would serve hitters nothing but a steady diet of off speed changeups, curves, and knucklers?

For the life of me, I couldn't figure out why they would risk playing a 37 year old veteran seemingly at the end of the line in place of a towering stud rookie like O' Byrne against a physical team like the Bruins. It didn't add up for me, and the head scratching continued.

I tried to find and understand anything I could like about the player many refer to as the Breezer, and I came up with shreds of appreciation for a few little things about him.

Honestly, I liked that HE wanted to return to Montreal to play. I can't say the price of his contract rankled me like the $ 4 million per deal he signed here last and was bought out of. At $700,000, and for the experience he has, let's just admit that it was interesting.

I liked that he had the gonads to return and prove something in a city where he has been mistreated to some extent. Maybe misunderstood is a n equally apt word.

At the Habs Fans Summit last October, I really liked it when Brisebois was the one Canadiens player who walked into the rink right off the streets. No big darkened window SUV zoming into the parking garage for this guy. Brisebois walked in off La Gauchetière, comfortable in his surroundings, sucking in the Montreal hockey atmosphere while fans stepped up to chat and seek autographs. I'd have thought the he'd be the last one to act such a way.

With that gesture, I began to understand that perhaps Montreal was one of the few cities where Brisebois was wanted, but that he wanted the experience of playing here again even more. It certainly appeared that way to me. 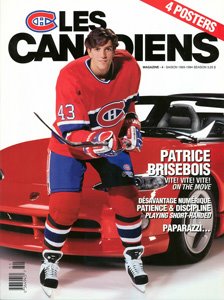 During this season, which has been a trying one for Brisebois at times, he has never complained about his icetime or made any statements detrimental to the team. When on the sidelines, he set an example for others who have had to sit out as well.

Though I like it when a player is mad about being left out, I like it even more when they keep their views to themselves and work harder to get back in the lineup and remain there.

There are surely other facets of Brisebois' game, demeanor and experience that fans are not privy to. Players on the teams he has been part of have always credited him with being a team player first and foremost. Perhaps no one knows Brisebois as a team mate better than coach Carbonneau.

Maybe it is time to forget what Brisebois has been. Perceptions change as people and players grow. Different roles make for different assessments.

Seeing Brisebois as something other than indifferent, for myself now, brings a more current appreciation. In four games this spring against the Bruins, he has been one pleasant surprise. While he still brings the same package as a player, and still makes similar mistakes at times, I have noticed that he has been steadier more often alongside Roman Hamrlik. Oddly, I have noticed his toughness and his confidence more than I ever did before.

Last night, when Brisebois unleashed that howitzer that Tim Thomas admitted he lost track of, I forgot about much of what's annoyed me concerning the player.

It started with the surprise of how the goal was scored itself, beginning with not finding the puck for a split second after it entered the net. Then it was the joy, the sheer joy and look of relief that flashed across Brisebois' grin when the camera zoomed in on him. The awkward moment gave way to a sweetness of sorts that made it all seem just right.

Brisebois, who ironically still employs a wooden stick, had earned this moment.

By being an old Habs warrior, against the Bruins in battle, he caused what has so far been the biggest turning point of the series, at a time when the outcome of the game, and perhaps the series itself, was up for grabs.

That deserves a hard earned measure of respect.

After the game, when questioned about the goal, Brisebois said the put everything he had behind it. Great quote!