Robert L Note: I came upon this piece at Philly.com in which Daily News sports scribe Ed Barkowitz gives his opinion on which team has the edge in 6 crucial categories. It's an interesting piece, but I don't really agree with most of his assessments. I think Barkowitz is being too kind to the Flyers in some areas and slighting the Habs in a couple of others. Where this series will be close, Barkowitz misses completely. After you read each of his points on forwards, defense, goaltending, special teams, coaching and intangibles, I'll weigh in with in with my added thoughts - where I agree and disagree with him.

Daily News sports writer Ed Barkowitz breaks down the Eastern Conference semifinal series between the Flyers and Canadiens that begins tonight in Montreal:

For the Flyers, it ain't pretty. They lost all four games to Montreal this season and by an ugly combined score of 15-6. The Flyers are just 1-5 in Montreal over the last three seasons. In the playoffs, Montreal has won three of the four playoff series, the most recent occurring in 1989.
The one playoff series the Flyers won against the Canadiens was in the 1987 conference finals. The Game 6 clincher followed a wild pregame brawl that was ignited by Montreal's ritual of ending the warmup by firing a puck into the opponents' net. Philadelphia's Ed Hospodar wouldn't allow it and things escalated quickly. Players from both sides sprinted out of their respective locker rooms, several wearing just undergarments, for the free-for-all. Old-time hockey. Eddie Shore!

Flyers: Danny Briere had a huge first round against Washington (NHL first- round highs of six goals, 11 points) and obviously will be heavily counted on again. But Briere has to be careful not to press. Briere, who hails from just outside Montreal, has been a target for Canadiens fans since turning down an offer to play for his hometown club during last season's free-agency period ... Joffrey Lupul scored the series clincher in overtime against the Caps. Let's see if it gives him a shot of confidence.

Canadiens: The resurrection of Alex Kovalev has been the primary reason the Habs earned the conference's top seed. Kovalev took a lot of the blame when Montreal failed to make the playoffs last year. He rededicated himself over the offseason and his 84 points were his best total since 2000-01. Last year, Kovalev was minus–19. This season, he was plus-18 ... Montreal's speed will give the Flyers fits. Tonight could be a problem depending on how weary Philadelphia is after playing and traveling both Monday and Tuesday night ... Steve Begin (pronounced Bay-Zhan) is the Canadiens forward most likely to draw Flyers fans' ire.

EDGE: Montreal. While both teams are pretty deep at forward, the Canadiens are healthier.

Robert L: I say very slight edge to Montreal here. Philly has as potent an offense as the Canadiens do. Their powerplay can be just as fearsome and it finished second to the Canadiens this season. I'm tempted to call this a draw, but where Montreal gains an edge is in it's third and fourth line depth, which helped them over Boston when the PP stuttered. 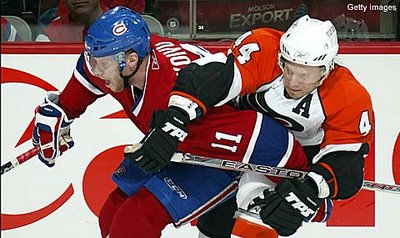 Flyers: The top four are solid, but Jason Smith's nagging shoulder injury caused his playing time to diminish and his effectiveness to be compromised as the Capitals series dragged on ... Kimmo Timonen runs the power play and shouldn't have to exert as much energy defensively as he had to against Washington's Alex Ovechkin.

Canadiens: The NHL's top power play is anchored by Andrei Markov, who tied for the league lead among defensemen with 10 power-play goals. Mike Komisarek is the thumper of the unit. He is a big hitter who also led the league in blocked shots.

Robert L: Barkowitz is right. From the first to down to the third pairing, the Habs defenseman have it all over the Flyers top six. We even have the luxury of a seventh and eighth D-man if injuries become a factor. Also factoring in is the Habs backline is much more mobile. On one hand, the Flyers blueliners might seem a tougher bunch, but that's just a miscinception based on the view that after Timonen, toughness is all they have going for them.

Flyers: Martin Biron was in net for just one of the four losses to Montreal. (So what if he got shelled for five goals?) Biron is playing with a lot of confidence right now and was huge in the Washington series.

Canadiens: Carey Price, 20, became the youngest goalie to register 20 wins since Patrick Roy and Tom Barrasso did it 22 years ago. He helped Canada win the 2007 World Juniors and Hamilton, the Habs' AHL affiliate, the Calder Cup last spring. The Habs put all their pucks in one basket when they traded Cristobal Huet to the Capitals at the deadline, but Price has been right.

EDGE: Flyers. The Flyers need to create havoc in front of Price and get under the kid's skin. But watch it, he might be wearing Clearasil.

Robert L: Barkowitz makes no point on why the edge is given to Biron here, but all that I could see is the experience factor if looked in terms on NHL experience. Biron is a capable NHL goalie, but he has never displayed the consistency required to be considered among the game's best. In his eighth season he is appearing in his first NHL playoffs. He also has a reputation as being a goalie who tires when playing a string of game. I'll predict we'll see Nittymaki before the round is over.

Carey Price however, has greatness written all over him, but that doesn't amount to anything until he proves something. Twice this playoff he followed losses with shutouts. He has the experience of having won under great pressure twice before, and while that might make up for having played only 50 games in the NHL, there are still the odd question marks that only time can erase.

I'm tempted to hand Price the edge, but I'll be fair as I can and call this a draw for now. This could revisited by game 3. 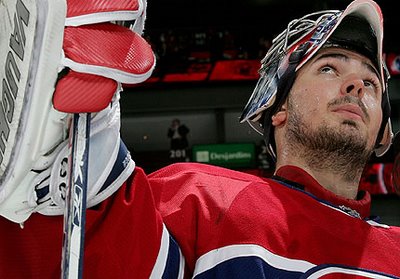 Flyers: With Kimmo Timonen and sometimes Mike Richards up high, Danny Briere down near the goal line and Scott Hartnell in front, the Flyers had the league's second-best power play.

Canadiens: Couldn't get the power play cranking against Boston, but it's still a formidable unit. The penalty- killing unit was 15th during the season.

EDGE: Montreal. The Canadiens killed off 27 of 30 power plays against Boston in the first round.

Robert L: I don't dispute this, regardless of the Habs poor PP showing in round 1. The Canadiens PK gives them what I would say is just a small edge here. The big difference maker could be the Flyers tendency of making more trips to the box - something that may well decide the series along with golatending here.

Flyers: John Stevens' primary concern is trying to figure out how to replace Mike Knuble, who is out indefinitely with a partially torn hamstring. He is soft-spoken, but can be stern and has done a nice job managing the locker room and relying on his leaders.

Canadiens: Guy Carbonneau is similar to Stevens in that he took over last year, but missed the playoffs. Carbonneau won two Stanley Cups as a player for the Canadiens and one with the Dallas Stars.

EDGE: Even. Since Stevens and Carbonneau are playoff rookies and each nearly blew a 3-1 lead in the first round, let 'em battle it out.

Robert L: I must have missed all those cries for John Stevens for coach of the year!

Carbonneau by a landslide here - not even close. Barkowitz places emphasis on the few similarities between the two to call it a draw. Last year might have been seen as disasters for both teams, but that is just a surface assessment. While the Flyers were the sinkhole of the NHL, Carbonneau's Habs missed the playoffs by one win and were feeled by illness, injury and feeble backup goaltending. I can't say Carbonneau did a whole lot different this year other than communicate better perhaps and get his star player Kovalev in line. The bottom line is what made the Flyers an improved team had everything to do with free agent signings and trades.

Coaching made a much bigger difference on the Canadiens.

And I haven't even factored Stanley Cups won into the argument.

Flyers: Even though both series went seven, the Flyers expended more energy to get to this point. Yet they summoned up the fortitude to win twice on the road, including in overtime of Game 7. They are playing with the house's money now.

Canadiens: Their inability to put away the Bruins was troubling, especially giving up four goals each in the third period of Games 5 and 6. All the pressure is on Montreal, the only Canadian team still playing. And here's to you, Mr. Price. A nation turns its lonely eyes to you.

Robert L: Barkowitz is wrong again, I don't see a single intangible heading the Flyers way. They are less rested than Montreal for starters. They have an injury to a key player who will not be returning. The Canadiens have a goaltender they can rely on to win games when they are outshot. The pressure Montreal is under helps instead of hurting. They will be primed to Canada's last team alive. That the Flyers used more energy than Montreal to get to this point is his perception only. Even if the Flyers had, doesn't that go in that Habs favor as well.

Whatever went on in the teams prior series ends tonight at 7 p.m. 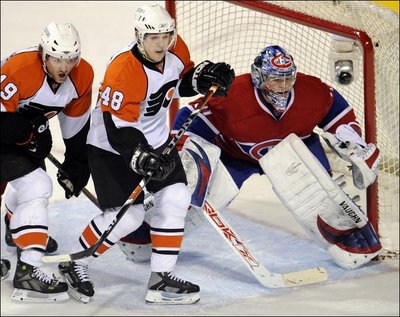 Here are Barkowitz' 3 keys to the series for Philadelphia.

1. Stay out of the box. It's as obvious as making sure the Zamboni has gas, but the team that allows the fewer power plays is halfway home.
2. Keep them in front of you. The Canadiens can skate, and if they turn this into too much of a track meet with odd-man rushes, it will hurt the Flyers.
3. Get physical. The Flyers can't sag back and allow the Canadiens to gain the offensive zone with speed.

1. Easier said than done against Montreal.
2. The Flyers defense is hardly mobile enough to consistantly contain Montreal over the course of the series.
3. Flyers can get as physical as they want to. It'll translate into a penalty parade that will suit the Canadiens assets perfectly. Besides, didn't the Bruins try that tact and still Montreal outhit them.

Barkowitz gives the edge to Montreal in 3 areas, to the Flyers in 2, and calls coaching a draw.

I give the edge to Habs in every department except for goaltending, which I suggest may only last two or three games in.

Having learned a lessons against the Bruins, I just don't see the Canadiens taking their foot off the accelorator in this one.

Only a fluke and some bad officiating could extend this round as far as seven games.

For a hard look at the Flyers merits, check out this post at Lions In Winter.