Looking Back On A Successful Regular Season

Share All sharing options for: Looking Back On A Successful Regular Season 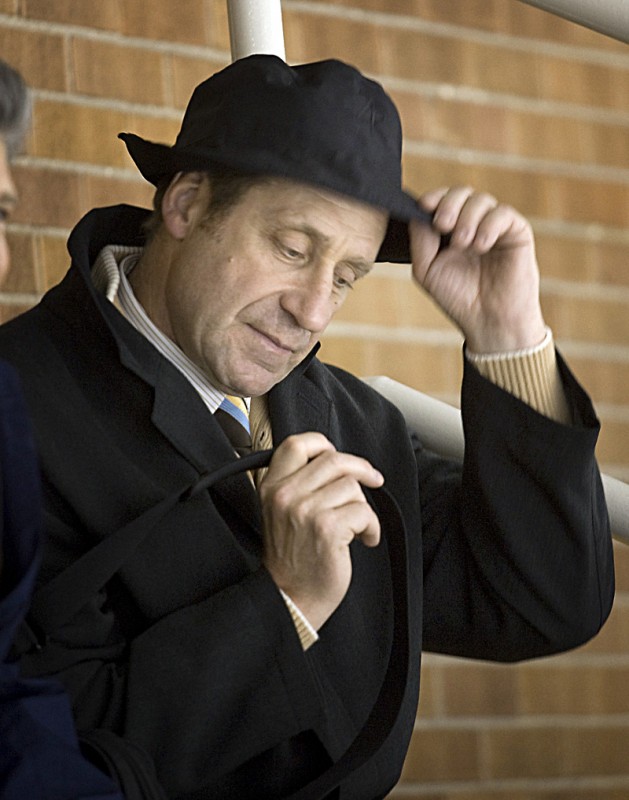 What a difference one year can make!

Last season, the Canadiens rode the hot goaltending of Jaroslav Halak, in for the injured Cristobal Huet, trying desperately to cling to an elusive playoff spot.

In 11 games from March 10 to April 3, Montreal were 9-2, and saw their hopes of advancing to the post season vanish with consecutive losses in their final two games.

The 6-5 heartbreaking loss to the Toronto Maple Leafs on April 5th did them in.

That final game was a fair representation of what 2006-07 was to the Canadiens. It all about breaks, bounces, and unpredictability.

For certain followers of the team, the ending result was dubious - a happenstance of the oddball calamities that inflicted the team. Some knew the Canadiens were a better team that the record showed.

For others, it was testimony that the Habs were still at square one. Faith, in the big picture for doubters, was fleeting.

So, what happened this season? What were the causes of behind the Canadiens launching from tenth place a year ago into the top spot in their conference this season?

It all started with the believers in the team, the GM, the coach, and the entire organization, understanding that the end result last season was not a true reflection of where the Canadiens were at.

No one panicked, no one was fired, the blueprint was not blown up.

Instead, the continuity of faith in the plan was reaffirmed. 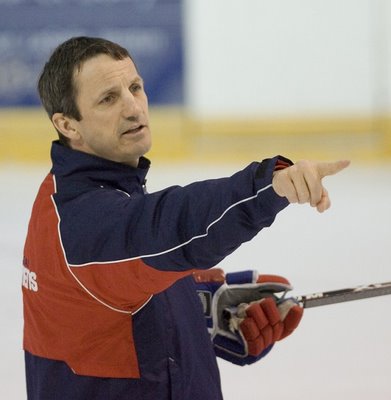 General manager Bob Gainey hit the summer free agency period with a Plan B that might have worked out better than his Plan A.

When the homerun swing for Daniel Briere and the attempted resigning of Sheldon Souray failed, Gainey went for depth. Subtracting Souray, Radek Bonk, Mike Johnson, Janne Niniimaa and David Aebischer from the starting lineup, the Habs GM latched onto Roman Hamrlik, Bryan Smolinski, Patrice Brisebois, and Tom Kostopoulos, and with them, brought in character and experience.

Gainey's best moves may have involved doing his homework in regards to the Canadiens youth corps.

With over a half dozen prospects ready to contribute in Montreal, he managed every case perfectly.

Many organizations follow structured means and motto's where each player is treated the same, when it comes to making it to the National Hockey League.

Gainey treated every player scenario individually based on a progression expectation. He tested skills, maturity, and and compatibility in each player, and learned exactly where each one stood. 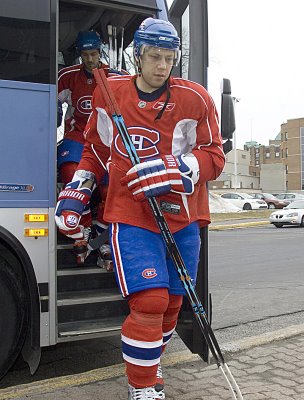 When training camp broke, Gainey dispatched Lapierre, Halak, O' Byrne and the younger Kostitsyn back to the Hamilton Bulldogs. Many thought all four had earned a spot - but there are only so many openings.

Opinions were divided over the camps of Latendresse and Sergei Kostitsyn, and the cases of Price and Grabovski making the big club caught many by surprise.

In certain cases Gainey was examining reaction and adaptation. He kept a pulse on maturity and an eye on domination in the AHL.

The fate of the Hamilton Bulldogs be dammed - Gainey wasn't in this to win back to back Calder Cups!

The tests that Gainey layed out for individual players paid great dividends. Eight of the nine players are currently with the Canadiens - save for Chipchura, who likely a victim of depth.

Price played well, but not steady enough to satisfy the team. A stint, a reality check of sorts, in Hamiltom at mid season served him well. He has been a different netminder since his callback, to the point where Gainey did not bat an eyelash in dispatching Cristobal Huet to the Capitals so that Price could assume his destiny. 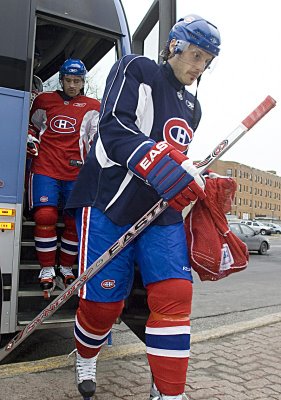 Max Lapierre coasted when he should have been focused in camp. His easing off the gas pedal cost him a Hamilton reminder. He returned to the Habs with renewed dedication.

Halak brooded upon his send down, a victim of numbers. No fault of his own, the Canadiens needed to learn what Price was capable of at an NHL level, as they had an impending free agent goalie to assess. After a shakey start, Halak reaffirmed his AHL dominance and his NHL worthiness.

Andrei Kostitsyn and Guillaume Latendresse shared a similar microscope. Both had qualities worthy of being solid NHL'ers, but their work habits represented question marks.

For Andrei Kostitsyn, it was an application to a more physical game that was being looked at. Intensity and a willingness to pay the price were his faults, and patiences were tested when he was sat off on occasion.

For Latendresse, the Canadiens organization kept a close eye on his dedication to learning. Not blessed with wingers of size, the Canadiens needed the big winger for his physical element as much as his scoring. A different approach was applied to his learning curve and there was a marked improvement in his on ice awareness while he maintained his offensive numbers. 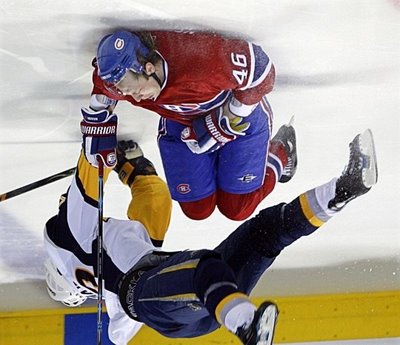 Grabovski and Chipchura were left to duel it out as fourth line center and eventually both were sent back to Hamilton.

Grabovski had lost his spot with the team initially for two main reasons. The first, which had nothing to do with his play, involved the Canadiens getting good offensive contributions from everyone to the point where he was not really needed. The second was the fact that Chipchura had outplayed him and it didn't do any good for him to be sitting around.

Chipchura's half season was a positive one, where he often looked very instinctive for a player of his young age. He did a lot of things well, but when measured against Maxim Lapierre in a similar role, his role and roster spot became expendable.

Sergei Kostitsyn was a revelation of sorts. He had been scoring at a point per game pace in Hamilton when called up and he has never looked back. He offered a physical dimension Grabovski did not have and also was a most compatible winger on whatever line he was given to play on. He also had a profound effect on his older brother, and somehow having the two together brought out the best in Andrei.

O'Byrne came as advertised and hasn't disappointed. He is a patient and poised defender who does not try to do to much. His size and his reach demanded a big league tryout and he passed it with steady play. O' Byrne seems to improve with each passing week, and I recently heard one assessment by a former NHL coach who said that O' Byrne is ahead of Mike Komisarek at the same stage. 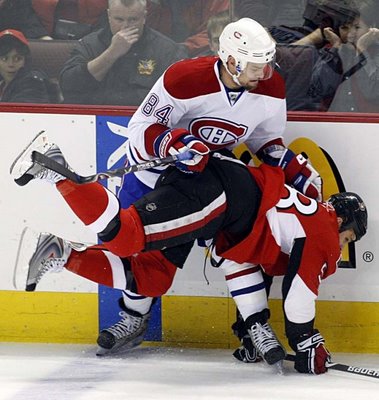 In the grand scheme of things, it was important for Gainey to find out exactly what he had in all this youth. They were all tested at the NHL level and though trial and error Gainey and Carbonneau learned what their youngsters were capable of bringing to the team. Seeing each indivudual player as a piece of a larger puzzle, enabled the team to find out exactly where other individuals fit.

What helped speed up the process for Gainey was the Hamilton Bulldogs surprise Calder Cup win in 2007. That bought players experience they could not have gotten otherwise, and not only was it beneficial to their progression as professionals, it also expediated Gainey's evaluation of his best prospects.

An abundance of talented youth injects a great faith in a team when every player understands their role. It can cause division and individualism if players feel their jobs or roles are threatened.

None of this seemed to occur with the Canadiens this season. Most players who were sat out for a game or two were quickly brought back into the lineup to contribute. One has to assume that Carbonneau understood how to manage not only his players, but their personalities.

Dealing with the ego's of third and fourth line players, as well as the extra defenseman the team carried, was crucial to not causing a division and the creation of player cliques.

It is obvious that both Carbonneau and Gainey learned a great deal about how to proceed with this from the Stanley Cup win of 1986. 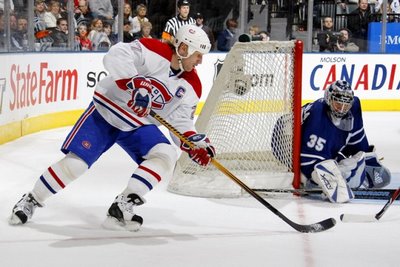 The storyline of the Canadiens 23rd Cup will always center around the exploits of Patrick Roy's rookie season, but in truth it had as much to do with how a team with 9 rookies at any given time learned the hard lessons of bonding for the betterment of team goals. Veterans and newcomers that season ran into conflict upon occasion, but this season the Habs seemed to steer right by such problems.

The tales of Alex Kovalev playing big brother to many of the European talents on the team is but one example of possibly many in regards to how this team gelled almost from the start. Veteran players such as Koivu, Hamrlik, Markov, Smolinski, Brisebois, and others surely were as supportive of the team first scheme.

Much has been made of Gainey's off season chats with Kovalev and the dividends they have paid, and rightfully so. For a player to show up with a freshened attitude, and who turns himself from a team cancer to it's most outspoken leader, it has an unestimable trickle down effect on the overall chemistry of a team. Leadership needs to come from many areas on a winning team, but when it is sought and found where it should be is most reassuring, especially on a young squad seeking guidance in their initial seasons.

Many decisions were made by team managemant throughout 82 games. There are always lineup substitutions, line mate changes, callups, demotions, off ice incidents, and game plan alterations. Players all have their opinions on what they believe works and doesn't work. When decision made by Carbonneau or Gainey produce the desired result time after time, players cease to question the motives or means, and simply place faith in those decisions as being best for the team. 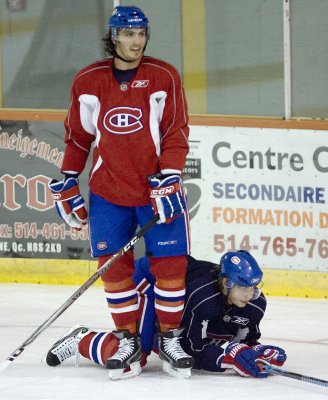 When Bob Gainey chose to part with Cristobal Huet at the trade deadline, he had to consider many evaluations. Gainey had to not only know for certain that Price was ready to handle the starters role, but also have a solid idea how the players themselves would react to it.

Huet was obviously a respected and appreciated team mate. Many mourned his trading away, but few doubted Gainey in knowing that it was the right thing to do. There were no players questioning the risk of the move or Gainey's bravery in being so decisive at a crucial time.

Gainey obviously has his thumb on the pulse of team, otherwise he would not have risked such a trade. He had to now that his team had faith in Carey Price and the character to soldier on.
In the 19 games in the post Huet era, the Habs went 14-4-1 to finish out the season.

In looking back over what has been the 2007-08 regular season, you will find all kinds of individual benchmarks, career years, and shining statistical notes. Numbers are spit out about how the Canadiens have not done this or that since whenever, and it all adds up to one big sexy spin.

The angles and views build great confidence, from players down to fans, but it is wise not to get too caught up in the allure.

What the Montreal Canadiens did best in this season was build, gel, and progress.

They are getting closer and closer to that Holy Grail destination, and if 2008 doesn't turn out to be the year, we can be comforted in the knowledge that a foundation has been poured, secured, and cemented for the future.

Regardless of how far the Habs go into this playoff, what has been learned along the way should serve them for years to come.