Kostopoulos Warms Up For Playoffs With A Game Of Street Hockey

Share All sharing options for: Kostopoulos Warms Up For Playoffs With A Game Of Street Hockey 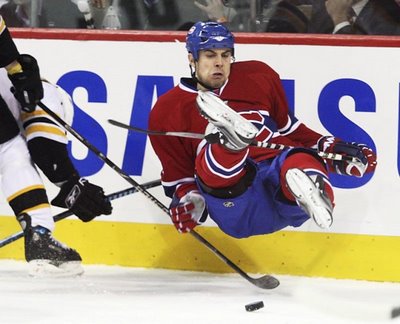 Robert L Note: I first caught wind of this story on a Habs fan board on Thursday, and it was worth a smile and a giggle. You might read more about it in coming days. I didn't give it creedence or a second thought without a MSM link until I heard the player refer to it himself during post game interviews transmitted on CKAC after the game. After the Habs 4-1 win, I went Googling for more on the story and found La Presse and Corus Sports links. Here is their content, translated and mixed in with mine.

On Monday, the doorbell rang at Tom Kostopoulos' home. The player Gazette columnist endearingly refers to as Tom the Bomb Nonstopoulos answered the bell expecting an autograph seeking fan.

Fans he did find, but this time the request was differerent.

"Wanna come out for a game of street hockey?", a youngster beckoned.

As Kostopoulos tells it, "How could I resist that!" 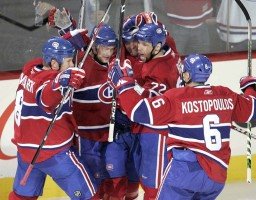 It was, Habs playoff fever hitting a peak on Nuns Island, where Kostopoulos resides.


These were no autograph hounds, seekers of photo opportunities, or kids hoping to get their mits on some rare Bell Centre playoff seats.

No, what they wanted was Tom Kostopoulos, flesh and bone.

"They wanted to know if I wanted to play some street hockey", Kostopoulos revealed.

The surprised Habs grinder didn't hesitate for a second. He grabbed his sneakers, found a stick, and went out to join the kids in the street.

According to Kostopoulos on CKAC, they numbered between 30 and 40 strong.

"I don't know how you can say no to something like that", said the player.

"The funniest part of it was that once I got outside and joined them, all the kids were calling me Mister Kostopoulos. I told them they better stop with the Mister stuff and just call me Tom. So they stopped calling me Mister, and kept calling me Kostoploulos. I could have died laughing!"

Kostopoulos' attachment to the city of Montreal, and the fans endearment to him will surely grow, not only in light of this story, but his performance in game one. Here is an article on Kostopoulos from the November 11, 2007 edition of the Gazette that you might find revealing.
.