How I Became A Habs Fan

Share All sharing options for: How I Became A Habs Fan 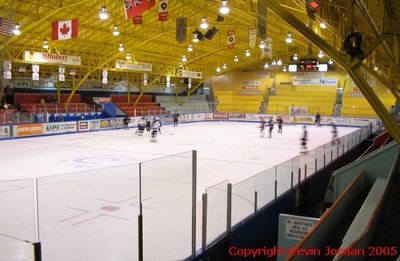 Robert L Note: A nod for hatching the inspiration for this piece must go out to Dennis Kane's Excellent Montreal Canadiens Blog, for telling of how the Canadiens were a gift to him in his youth from his father. It was a very familiar tale of fathers and sons. I'm posting my story of how I became a fan of the Montreal Canadiens, and it is probably not all that unique. If any readers have an interesting story about how they feel in love with the Canadiens, write it out and sent it to me at realitycheck-time@hotmail.com, and I'd be happy to post it here and share it with other fans.

I became a Canadiens fan at age 8 thanks to my father as well.

It happened oddly enough, because I was a hockey fan first before becoming a Canadiens fan. Team loyalty was a concept that had yet to grip me, even though I'd watched my father passionately cheer on the Canadiens during the 1969 Stanley Cup.

Back at that time, I was more a fan of players individually than any team. While I was growing aware of what the Canadiens represented, I was really just starting to learn what the NHL and hockey were all about.

I remember my Dad's tales from that time very clearly still. The Rocket's 50 goals. The Boomer's shot. Serge Savard's broken leg and Conn Smythe win. Some former Habs players then with the St.Louis Blues than angered my father. A particual game in the early spring of 1970, where the Canadiens needed to score about 10 goals with their goalie pulled to earn a playoff spot on the season's final day.

I played street ball hockey winter and summer, and shared the common story of how conspiring events, smallest kid stuff, made me a goalie against my own will.

It was about that time that my hockey imagination was swept up in the exploits of Bobby Orr.

I became a Bobby Orr fan for a time and a Stanley Cup. I wanted the Bruins to win so Bobby would win. His "flying through the air goal" was the stuff of childhood dreams.

The following season, Dad was filling me with more stories of the Canadiens, and I listened intently to all he had to say. I watched the games but still felt no affinity to any one team. I was watching for players, and how they played, and what they team did on the ice.

What I was really burning for, was to see a game live. Many of my father's friends had season tickets for the local junior team and I was always asking Dad to bring me.

Around the time I saw my first Cornwall Royals game, I became aware that the Habs that season weren't anything special. They had struggled along and there wasn't much hope for them to win the Stanley. Talk of the Canadiens then mostly centered around a player that the Habs would soon be drafting.

I was eating up hockey knowledge around this time. My father had given me some paperbacks on the NHL, some magazines, and I began not only watching all the hockey I could on television, but I also listened on radio.

The second or third game I heard on a little scratchy transistor featured Ken Dryden making his NHL debut.

In the same week, I went to my second Royals game, and it changed my life. 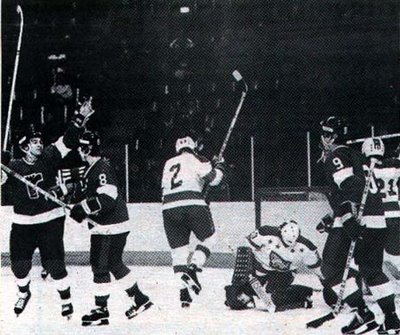 I wasn't quite a fan of my local team. I knew of two names on their roster prior to seeing them for the first time - a little goalie named Richard Brodeur and an animal named John Wensink (think Oggie Ogglethorpe from Slapshot, and you'll sense my first impressions!).

Again, I pushed loyalty aside to focus on different players and what they were doing.

The Royals were playing the Quebec Remparts, the league powerhouse. They had an abundance of talent on the ice, and if you blinked you missed something special.

My father and his friends spoke the whole game about this wunderkind who scored over 100 goals that season. The notion of a hundred goal season just blew me away, and I hung onto everyword they said as I watched the game in front of me unfold.

Guy Lafleur was the player's name, and as I listened, I learned it was his destiny to become a Montreal Canadiens player by summer. 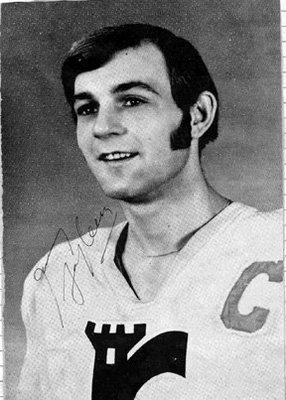 I didn't really understand that notion - how players were owned by NHL teams - but still it intrigued me greatly.

I set my focus on Lafleur for his next few shifts and he did nothing but skate around.

"He's a floater, the Habs don't need that!", said a man two seats from me.

I was waiting for Lafleur to show me something and it took awhile in coming. I was ready to think the man was right.

Just as the words were leaving his lips, Lafleur stripped a player of the puck at center ice, turned and three strides into the blueline, he unleashed a howitzer from the far right side that hit Brodeur in the shoulder and careened off the glass right in front of me, leaving a skid mark in it's wake.

I was sitting in the first row behind the net, and holy hell did the puck ever make a racket! I barely even saw it fired, it moved so quick.

I began to pay more attention to all the Lafleur did, with or without the puck. He was swooping and swirling, dipping in and out of plays, and generally doing more things more rapidly than any player out there. He seemed to have two players on him at all times, and in his facial expression lived a grin of anticipation that is hard to explain.

It was as if at any moment, he knew he could alter the game's tempo and outcome. And he did. Moments later Lafleur fired another blistering shot that bulged the netting under Brodeur's crossbar.

Lafleur played the second period mostly at the far end of the rink. I watched him come behind his net to start end to end rushes, one of which pulled the fans from their seat - in this a visiting arena!

The rest of the game remains a blur, but I do know that he added 3 more goals at our end in the third period.

Quebec won that game by a high score, and apparently Lafleur had a sixth goal in there somewhere that I'd missed. In my rinkside seat, I waited for the visiting players to exit towards their dressing room, so that I could catch a closer glimpse of Lafleur. 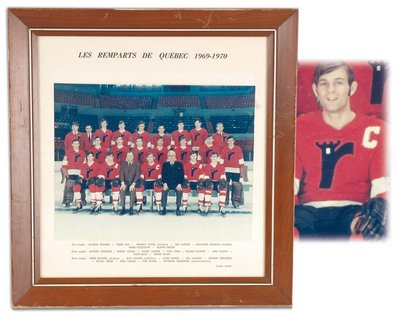 In moments, the Rempart's number 4 walked by. I remember noticing his large sideburns and how they resembled an upside down Remparts logo. I walked out of the Water Street Arena knowing I had just seen the most incredible hockey player ever.

I recall those moments so vivdly years later, for in that red bench seat by the glass, I have often stood there tying my daughter's skates before she has gone out to play. Those memories sit in that seat. I still sit there and see nothing else. They will be tearing that run down arena in a matter of years, and it will a sad day for many memories of the like.

That spring, I followed the Canadiens pursuit of the Cup intently. Frank Mahovlich arrived, and then Dryden came out of nowhere, and by May, a miracle had happened.

The 1971 triumph remains to this day my favorite Stanley Cup win. I might not have seen the likes of Beliveau and Ferguson in their last season, the Pocket Rocket's heroics, Lemaire's 50 foot slapshot through Tony O's legs in a dense Chicago fog, or his brother Phil shaking his head and cursing Dryden when robbed repeatedly, had I not been made into such a hockey fanatic by a junior star who captured my imagination.

I'd have missed all that were it not for Guy Lafleur.

These submissions were added at the Habs Inside Out Site:

Just grew up a Habs fan because everyone else in the household were Habs fans I guess. When I first started skating in about 58-59 I use to wear #9 on my jersey... switched to number 22 in the mid to late 60s' and to 19 in the 70's. My guess is by the numbers you will know what kind of player means a lot and is important to me. Funny thing, because my son turned out to be the type of player That I always coveted, but in one package.... score goals, play maker, a hitting machine, loves scrapping if anyone dared. Unfortunately he is a die hard Sens fan who tries very hard to get me to convert... oh well!

Sorry I don't have an exotic reason for becoming a Habs fan.... but thats it... I was born into and will die with a CH in my coffin... these instructions will be made clear.

Enjoy the playoffs my dear fellow Habs fans... its been a while!

1966, we would only get the second and third periods on TV, on a Saturday night growing up in the interior of BC. My father having grown up in Kirkland Lake Ontario used to tell me of some of the players he knew including Ralph Backstrom and Dick Duff. I guess I became interested and the rest is history. The first time I remember watching the Habs win the cup was in 1969, when Serge Savard won the Conn Smythe. The next won was when Ken Dryden stoned the Bruins in 71, the huge comeback on Holy Thursday ( unfortunately I was at mass!!), and defeating the Black Hawks with the Pocket Rocket leading the way. Then the 70's and the Road Runner in 1973, and the great four in a row, with my two favourites being the annihilation of the Broad Street Bullies (I too enjoyed the opening lineup) and The too many men on the ice. ( Cherry is still bitter). The unlikely wins in 1986 and 1993.

Then I saw Yvan Cournoyer in a game in the early 1960's- wow he was fast! My mother had always like Jean Beliveau (my Dad and older brother were Red Wing fans) and I started to like Big Jean as well. Then Duff was traded to the Habs and played on a line with Beliveau and Cournoyer. I was in high school at the time and now completely red, white and blue.

As I attended university, Sam Pollock traded Ernie Hickey to the Oakland seals for their first draft choice (I think Oakland's GM was a former Habs employee). That pick turned into Guy Lafleur. In 1976, the Filthydelphia Flyers were going for three Stanley Cups in a row. They had some talent but won largely through intimidation - they would commit 20 infractions and get called for two. For Game 1 of the final series between the Habs and Flyers, Scotty Bowman started five tough guys, including Pierre Bouchard, Gilles Lupien and Rick Chartraw - a shocking group to take the opening face-off. The puck dropped, ten gloves dropped and five Flyers dropped - Habs won 4-straight. That was one of my all-time favourite moments.